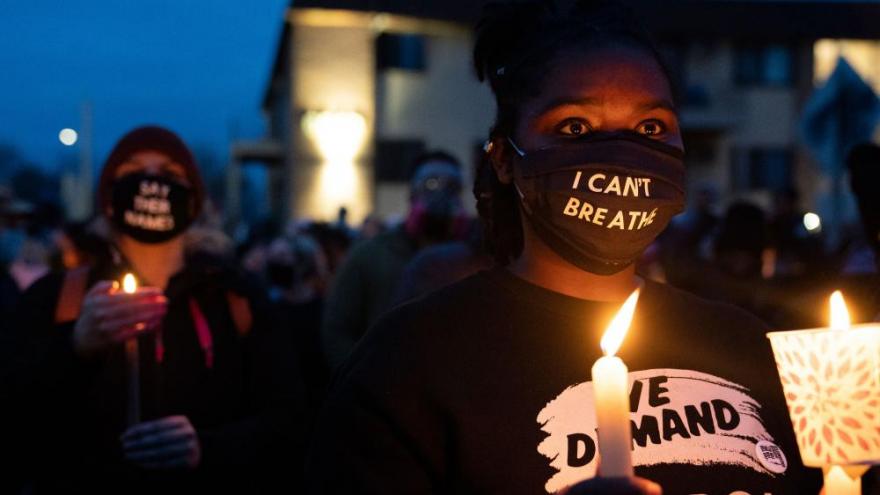 Demonstrators gather during a protest in response to the shooting death of Daunte Wright outside the Brooklyn Center Police Department.

(CNN) -- For five nights in a row, protesters have gathered -- often with snow falling around them -- outside of the Brooklyn Center Police Department to chant the name Daunte Wright, whose fatal shooting during a traffic stop Sunday sparked anger in the Minneapolis area and across the nation.

During the days, the local community witnessed a fast-moving series of developments as authorities sought to address the outrage.

Wright's death resonated deeply in a state with still open wounds after the deaths of two other Black men at the hands of police: Philando Castile in 2016 and George Floyd in 2020. The protests, and the nearby trial of the officer charged in Floyd's death, have boiled over anger and reignited national conversations about policing and the use of force nationally.

The former police officer charged in Wright's death, Kim Potter, made her first court appearance Thursday and is not scheduled to appear in court again until May 17.

But although the legal battle is now likely to see a lull, officials anticipate that protests over the shooting are just getting started.

The first three nights of protests in Brooklyn Center saw chaos and violence break out after sundown as protesters threw projectiles and police deployed tear gas. And though protesters continued to show up Wednesday and Thursday, the demonstrations have been reported to be calmer.

On Wednesday night, there were less than half as many arrests as the day before, Col. Matt Langer, chief of the Minnesota State Patrol, said at a late-night news conference. And while there were some attempts to engage police by protesters, there were no significant disruptions from the protesters that remained after curfew Thursday, according to a tweet from Minnesota Operation Safety Net.

But authorities are prepared for demonstrations to continue, especially as the trial of former Minneapolis police officer Derek Chauvin, charged in Floyd's death, reaches closing arguments Monday and a verdict to follow.

And though officials have moved quickly on calls for justice, Wright's family told reporters Thursday "there's never going to be justice for us."

Shooting on Sunday and body camera footage on Monday

The incident began on Sunday when Wright was driving with his girlfriend to the house of his older brother, Damik Bryant.

Wright was pulled over for an expired tag, and officers learned he had an outstanding warrant, police said. The warrant was for a gross misdemeanor weapons charge, according to the news release from Washington County Attorney Pete Orput's office.

Wright called his mother before he got out of the car and before the shot was fired that would end his life.

On Monday, then-chief Tim Gannon released body camera footage, showing Wright standing outside his vehicle with his arms behind his back and an officer directly behind him, trying to handcuff him. An officer tells Wright "don't," before Wright twists away and gets back into the driver's seat of the car.

Orput's office said Potter "pulled her Glock 9mm handgun with her right hand and pointed it at Wright."

The officer whose camera footage was released is heard warning the man she's going to use her Taser on him, before repeatedly shouting, "Taser! Taser! Taser!" It's at this point that Orput's office says Potter "pulled the trigger on her handgun" and fired one round into the left side of Wright.

"Wright immediately said, "ah, he shot me," and the car sped away for a short distance before crashing into another vehicle and stopping," the release said.

An ambulance was called and Wright was pronounced dead at the scene, Orput's release states.

Potter submitted her resignation on Tuesday, though Brooklyn Center Mayor Mike Elliot did not accept it that day, saying "we're doing our internal process to make sure that we are being accountable to the steps that we need to take."

Although Brooklyn Center is in Hennepin County, the case was given to Washington County prosecutors to avoid the appearance of conflict of interest, officials have said.

Elliott also announced Tuesday that Gannon had submitted his resignation letter, and that Commander Tony Gruenig would take over as the acting chief.

The next day, after a medical examiner determined Wright died of a gunshot wound and that his death was a homicide, Potter was arrested and charged with second-degree manslaughter.

Imran Ali, a prosecutor in Orput's office, has said prosecutors intend "to prove that Officer Potter abrogated her responsibility to protect the public when she used her firearm rather than her Taser."

"Her action caused the unlawful killing of Mr. Wright and she must be held accountable," Ali said in a news release.

Potter posted bail and was released from custody, according to the Hennepin County Sheriff's official website.

Potter made her initial court appearance Thursday in in Hennepin County District Court via a Zoom.

She appeared remotely from her attorney's office for the hearing before Judge Paul Scoggin. Gray was on camera for the entire hearing, Potter only appeared on camera to say "yes I am" when the judge asked her if she was present.

Both parties agreed to meet for the next hearing on May 17, and Scoggin set Potter's bail at $100,000, provided she remain law abiding and make all her future court appearances.