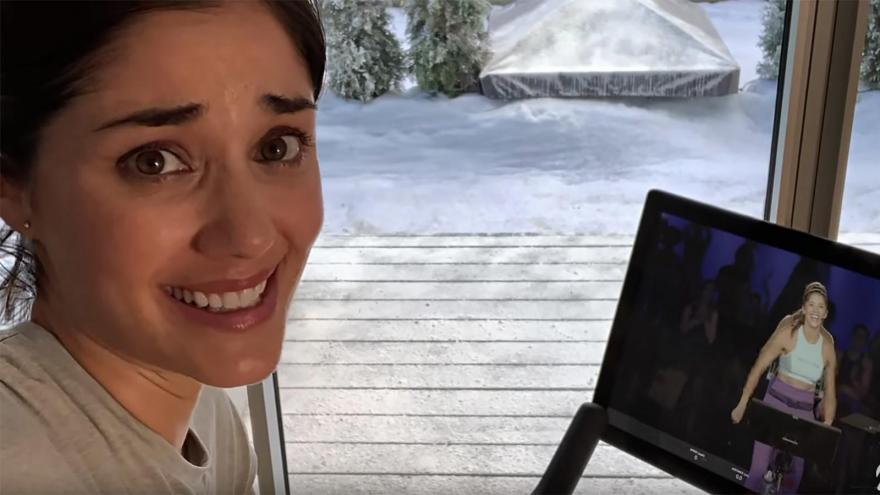 Peloton has recently come under fire for a holiday commercial showing a woman documenting her year with the Peloton bike her husband gave her for Christmas.

(CNN) -- It's a new beginning for the Peloton woman.

When last we saw her, she was celebrating her yearlong fitness journey and thanking her husband for giving her an exercise bike for Christmas. Both the bike and the husband were nowhere to be found on Friday.

In a video posted to his Twitter, Actor Ryan Reynolds seemed to poke fun at the recent controversy around an ad for Peloton, the indoor bike start-up. The video, a commercial for his Aviation Gin brand of distilled spirits, opens with the woman now dubbed "the Peloton woman" staring blankly at the camera while out with two girlfriends before they toast to "new beginnings."

The caption: "Exercise bike not included."

Peloton has recently come under fire for a holiday commercial showing a woman documenting her year with the Peloton bike her husband gave her for Christmas. Critics have pointed to the ad's purported sexism and deafness to the privilege of its subjects. Some have said the woman appears to be pressured to work out by a husband who gifted her an exercise machine unprompted.

Peloton said the advertisement was misinterpreted.

"We constantly hear from our members how their lives have been meaningfully and positively impacted after purchasing or being gifted a Peloton Bike or Tread, often in ways that surprise them," a Peloton spokesperson said in a statement to CNN. "Our holiday spot was created to that fitness and wellness journey."

She comes out of her daze and tells the two friends around her that the gin she is drinking is smooth.

The friends look concerned about her, one offering to get her another drink and the other telling her "You're safe here."

She toasts to new beginnings before downing her drink and taking the second offered to her.

"You look great, by the way," a friend tells her.