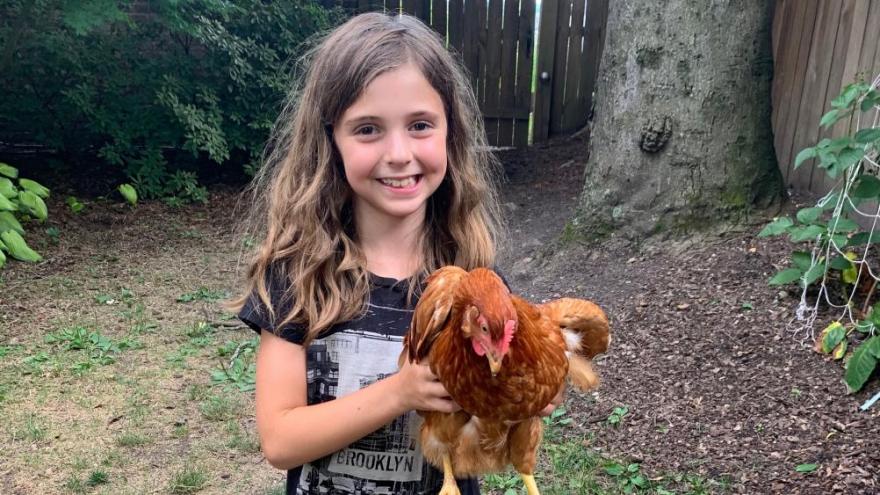 (CNN) -- At the start of the coronavirus pandemic, the food supply in America was in question. Images of barren grocery store shelves, cleared out meat sections and empty freezer aisles littered the internet.

It was then that Gillian Frank and his wife, Kathryn Jones, both 41, discussed getting pet chickens. "Wouldn't it be kind of a fun hobby? And it would ensure that we had eggs -- if we got chickens," Frank told CNN.

Frank, who's a historian at the University of Virginia and his wife, who's a lawyer, both grew up in the suburbs of Toronto. Owning chickens had never been an aspiration of theirs, until now. Plus their 8-year-old, Charlotte, absolutely loved the idea.

In April, they added six chickens to the backyard of their Richmond, Virginia home. They already had two dogs and two cats, but Frank said the chickens are actually much lower maintenance than the other pets.

"They are hilarious," he said. "They are funny little creatures who like to wander around the yard when they're not in their coop and run and they get into all the weeds. They get into the flowers and everything too, but I'm looking at the positives."

Sales of backyard chicken coops have skyrocketed since the start of the pandemic, said Traci Torres, CEO of My Pet Chicken.

"It started coming back down because we ran out of everything to sell," Torres told CNN. "We just didn't have time to ramp up production of product."

Even still, sales in July are up 250% since items have been restocked.

Torres said she created the business because in 2004, when she was looking to keep chickens for herself, there was nothing that handheld customers through the chicken-buying and raising process.

"We have the coops, we have the supplies, we also have free information and short little guide books on the website to give you the basics," she said.

Customer service agents, who all also own chickens, answer questions about how many chickens to get, what to know about chicken coops and what supplies to order -- and even sell the baby chicks, which cost around $5.

"As a seasonal business, we're already busier in the Spring and Summer than in the Winter," she said. "This year though, customer service agents were losing their voices and getting carpal tunnel."

They found that their customers had either always wanted to have chickens and thought that now was the perfect time since they were working from home, or like Frank had become concerned about how they would feed their families.

"We're now allowing people to reserve their coop orders in advance," Torres said. "We have hundreds of orders waiting to ship once product arrives."

Torres said she is excited that more and more people are farming in their backyards, controlling how their food is sourced, and simply enjoying the outdoors.

Frank's chickens began laying eggs about a month ago. They produce about half a dozen eggs a day.

"It's made us popular with the neighbors because we have more eggs than we can handle," he said. "So everyone on our block that we're friends with is getting farm-fresh eggs."

The egg surplus spurred more coronavirus hobbies: cooking and baking. His wife Kathryn makes homemade eclairs, bread, tarts, and souffles, and is just being creative in the kitchen.

"I'm dreading figuring out if it will affect our cholesterol," he said.

Frank said it's fun to have the eggs and cheap to keep the chickens, so they will maintain a new hobby after the pandemic ends.

The hardest part, Frank said, is getting them back in the coop -- thanks to the troublemaker, Susan Egg Anthony, who always puts up a fight.