The pandemic pushed nearly 100 million people in poverty. They're struggling to escape 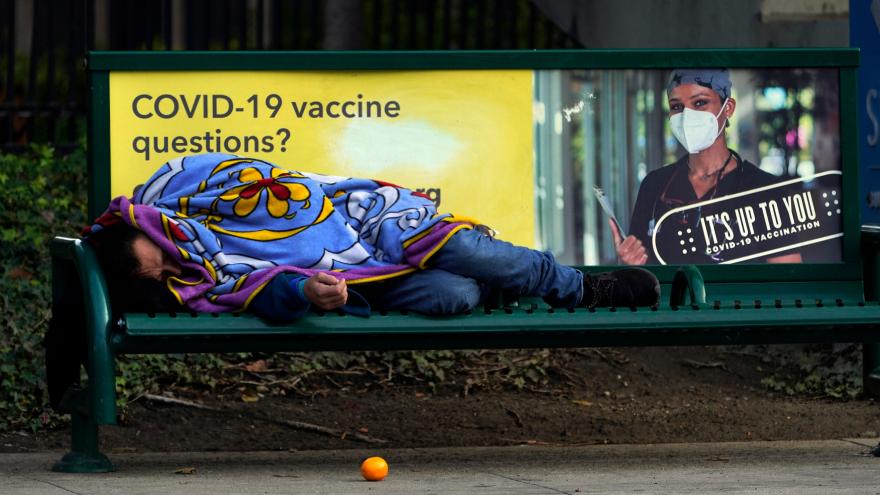 She and her husband, Pradip Roy, were garment workers in Bangladesh when the Covid-19 pandemic hit last spring, leading to mass layoffs at their factory.

Like millions of people around the world, both lost their jobs in the capital city of Dhaka, where they had worked for years making pants, shirts and jackets. And like countless other migrants, they were forced to move home to the countryside to cut down on expenses.

The World Bank estimates that 97 million people across the globe fell into poverty due to the pandemic in 2020, living on less than $2 a day.

There has been little improvement since. "Globally, the increase in poverty that occurred in 2020 due to Covid still lingers, and the Covid-induced poor in 2021 continues to be 97 million people," economists at the World Bank said in a blog post earlier this year. They noted, however, that overall poverty should go down this year.

"We barely had enough to return home," Dipali Roy said in an interview in Bengali from the family's home, a corrugated metal shack in a village in northern Bangladesh.

As the couple looked for new ways to earn a living, they struggled to adjust. They tried to find a loan to start a small business, but at first no one was able or willing to help. Some local nonprofitorganizations asked for collateral, which they didn't have.

Hoping to land a job in agriculture, Pradip Roy approached some farmers. But he was dismissed as a "Dhaka man," who wouldn't be able to cope in harsh weather conditions, recounted his wife.

Above all, "food was the biggest problem," said20-year-old Dipali Roy, who was pregnant at the time and sometimes could only have one meal a day through a public rationing program. "I didn't know what to do ... We would just have to sit and wait when they would bring food."

2020 led to a historic setback in the fight against global poverty, with the number of the world's poorest rising for the first time in over 20 years, according to the World Bank.

Carolina Sánchez-Páramo, global director of poverty and equity at the World Bank, likened the pandemic to a natural disaster that would quickly spread beyond its epicenter in East Asia.

"We knew the tsunami was coming," she told CNN Business.

"The question was not if this [economic shock] was going to reach the other developing regions, but when."

Even as tens of millions of people were being pushed into destitution, the ultra-rich becamewealthier.Last year, billionaires enjoyed the highest boost to their share of wealth on record, according to the World Inequality Lab.

And while it took just nine months for the world's 1,000 richest people to reclaim their fortunes during the pandemic, it could be more than a decade before the least fortunate recover, according to Oxfam International's annual inequality report, released in January.

Shameran Abed, executive director of BRAC International, a nonprofit that works to alleviate poverty across Asia and Africa, pointed to the widening wealth gap, saying that "the world's three richest people" could likely wipe out ultra poverty on Earth.

"It's not their responsibility alone," he added. "But I'm just saying that generally there's enough resources [to tackle the problem]."

Recently, the top 1% has been under pressure to pitch in on humanitarian issues.

In November, the director of the United Nations' World Food Programme called on billionaires including the world's two richest men, Jeff Bezos and Elon Musk, to "step up now, on a one-time basis."

In an interview with CNN's Becky Anderson, David Beasley said that giving $6 billion, or about 2% of Musk's net worth, could help solve world hunger.

"[It's] $6 billion to help 42 million people that are literally going to die if we don't reach them. It's not complicated," he added.

The call-out got a direct response from Musk, who later said on Twitter that if the organization could lay out "exactly how" the funding would solve the issue, he would "sell Tesla stock right now and do it."

The Tesla CEO did not publicly respond when the UN released a plan in November.

Abed, who recently worked with members of parliament in the United Kingdom to declare an "emergency" on the issue, argues that "poverty is a policy choice."

"We have the know-how to pull large amounts of people out of poverty," said the nonprofit leader, whose team helped the Roys with a loan that the couple said got them back on their feet.

"There's plenty of evidence of what works, what doesn't work."

Experts say the first task is to concentrate on vaccinations.

"We need to make sure that everybody has access to vaccines or some sort of treatment for the pandemic, because till you manage to control the health shock, it's very hard to think about economic recovery right?" said Sánchez-Páramo. "That's almost like a necessary condition for anything else to happen."

Vaccine inequality has become a major issue as many of the world's richest countries hoard shots, buying up enough doses to vaccinate their populations several times over and failing to deliver on their promises to share them with the developing world.

And as governments continue to rebuild, theyshould also focus on reactivating economic activity that would generate employment, such as in the service sector, according to Sánchez-Páramo.

Over the past two years, governments around the world have rolled out stimulus packages to help prop up their respective economies.

Sánchez-Páramo noted that while many have since come under "fiscal pressure" over how much they spent, it was important not to roll back safety net programs too quickly.

"They [should] wait for employment to recover before they withdraw income support from some of these more vulnerable households," she said.

"Because if we consolidate and roll back the support too quickly, we may actually see a second wave of increases in poverty because the employment is not yet there."

Back in Bangladesh, the Roys are having better days.

Pradip Roy now works as driver with his van, ferrying passengers for the equivalent of about $6 a day. He said the family has no plans to return to the city, and is now saving up to buy a cow and some agricultural land.

While the two have technically climbed out of poverty, the hardships of the coronavirus crisis have made their mark.

Dipali Roy, who described the pangs of hunger while she was pregnant as "the most painful" time of her life, said "if I think back to, or remember those times, my heart bursts with tears."

"But now we are having very good days," she added, saying that she had regained hope for the future, and dreams that their six-month-old son will go on to get a master's degree.

Still, they have a reminder for the international community: do not forget those still left behind.

"There are a lot of people like us who fell to the bottom," said Pradip Roy. "So if you stand beside them they can also rise back up like us, slowly."

— Esha Mitra in New Delhi and Ivana Kottasová in London contributed to this report.