'The only word I know to call it is hell': Turpin sisters share the details of their family's house of horror 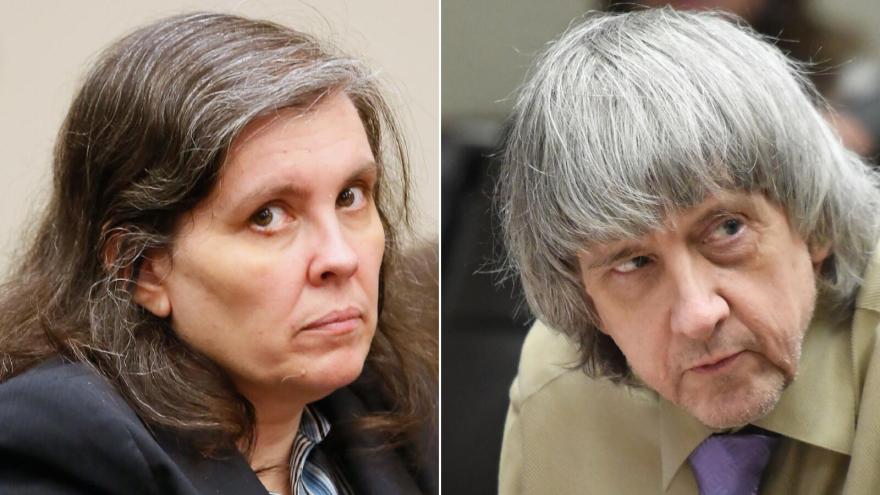 (CNN) -- Jordan Turpin was 17 years old when she found herself crawling out of a window of her family's home, hoping to save the lives of her 12 siblings.

For two years, she had been planning her escape after decades of unspeakable emotional and physical violence inflicted by her parents in their Perris, California home. Equipped with nothing but an old cellphone she found in the house, Jordan ran out and called 911.

"I was always terrified that if I called the cops or tried to escape, I would get caught, and then I knew I would die if I got caught," Jordan, now 21, told ABC News' Diane Sawyer in an exclusive interview Friday. "But at the end, when I saw all my younger siblings, I knew that's what I had to do."

During the chilling 911 call, she told police the house the family lived in smelled so badly that she could barely breathe, and she thought she and her siblings might need to go to the doctor.

When the first police officer arrived, she immediately showed him the phone, full of photos and videos she took of herself and her siblings to prove the abuse.

Her bold getaway in January 2018 led to the discovery of her siblings and uncovered what Riverside County District Attorney Mike Hestrin described as one of the "worst, most aggravated child abuse cases" he has ever seen.

Some of the siblings, who ranged in age from 2 to 29, had been found shackled to beds with chains and padlocks. A few of the adults were so malnourished, they looked like young teenagers.

That morning, Jordan sat in the back of a police car and watched as her parents, David and Louise Turpin, were arrested. The pair were each sentenced to 25 years to life in prison after pleading guilty to 14 charges of torture, adult abuse, child endangerment, false imprisonment and more.

Their first glimpses of freedom

When police arrived at the Turpin home and declared they were conducting a welfare check, it didn't take long for them to recognize the magnitude of the children's horrifying reality.

They discovered a home reeking of human excrement, decaying garbage, and molding food, with every surface covered in trash, ABC News reported in the 20/20 program titled, "Escape From A House Of Horror." The children were found quietly sitting in filthy beds, limp, frail, caked in dirt, their arms covered in bruises.

One child was found with his wrist and ankle chained to the bedpost; he had been in that state for weeks. Bodycam footage from that day show the heavy chains used on the children.

"'The only word I know to call it is hell," said Jennifer Turpin, the eldest of the children.

The 13 Turpin kids were taken to a hospital, where their nurses and doctors began treating them for a long list of issues. Some were so emaciated they could barely walk, others suffered from heart damage due to a lack of nutrients. One preteen's arm was the size of a 4.5 month old baby, according to ABC.

The children had limited language skills and knew little about the outside world.

Besides suffering severe caloric malnutrition associated with muscle wasting, several had cognitive impairment and "neuropathy, which is nerve damage, as a result of this extreme and prolonged physical abuse," Hestrin said.

The first thing Jennifer Turpin did to celebrate was dance in the middle of her hospital room.

"Music was playing, I got up," Jennifer, now 33, told Sawyer. "I made sure there was a little bit of a floor cleared out and I danced."

There was also an exhilarating visit to a playground.

"If something happened to me, at least I died trying"

Usually, their only diet consisted of just peanut butter sandwiches, the sisters told Sawyer. On rare occasions, they were given frozen foods. And if they were still hungry and got caught trying to eat anything else, they were viciously punished.

Sometimes the children were left so hungry, they ate packets of ketchup and ice cubes.

"When you have parents abusing their kids to this level, and they're their own flesh and blood, it begs this question 'How can any sane person do this?'" Hestrin said on the ABC News special. "And the truth of the matter is sane people commit evil acts all the time."

The day before Jordan's escape, she said she overheard her parents saying they were moving the family to Oklahoma. If they moved, Jordan said, there was "a big chance" some of them would have died.

"That was my only chance," she continued. "I think it was us coming so close to death so many times. If something happened to me, at least I died trying."

Jordan recalled when she first began considering what her life could be like if only she weren't trapped. It was because of singer Justin Bieber, she says, whose music and interviews spoke out to her.

While her favorite Bieber songs are "As Long As You Love Me," "Boyfriend," and "Baby," it wasn't only his music that inspired her to take action.

"I started realizing that there's a different world out there," Jordan said.

She enjoyed watching his interviews, learning new words from him while realizing the things they had in common. But one day, her mom caught her secretly watching a Bieber video and choked her.

"I thought I was going to die that day," Jordan said. "After that whole day happened, I kept having nightmares that she was killing me."

Despite overcoming a life many could not even begin to imagine, the Turpin children aren't completely safe yet.

ABC reported that a few of the Turpin children were placed with a foster family that was arrested and charged with abusing multiple children in their care, including at least one Turpin child.

Another Turpin child who is now an adult was placed in a home where her foster parent told her she understood why her parents would chain her up.

"They felt betrayed," Melissa Donaldson, the Director of Victim Services in Riverside County, told the show. "Did we see kids having to not have a safe place to live or stay at times? Yes. Did they have enough food at times? They did not."

"We have to fix it. You would think that this is the time to really get it together and do everything we can, and we didn't do it that way," she continued.

At times, some of the Turpin children didn't have access to housing, and relied on couch surfing for shelter, Donaldson said, adding that they also went to churches to get food.

"I don't really have a way to get food right now," Jordan said. It began when she was released from the extended foster care system in July, without any help with food, healthcare, or housing, ABC reported.

Unfortunately, her sister isn't in a much better position.

"Well, where I live is not the best area," Jennifer said.

Despite receiving $600,000 from generous strangers across the country, the Turpin children have had difficulty accessing the money, and questions as to why have gone unanswered by county officials who cited court-ordered secrecy, ABC reported.

"They have been victimized again by the system, and that's unimaginable to me that we could have the very worst case of child abuse that I've ever seen, maybe one of the worst in California history, and that we would then not be able to get it together to give them basic needs, basic necessities," he added.