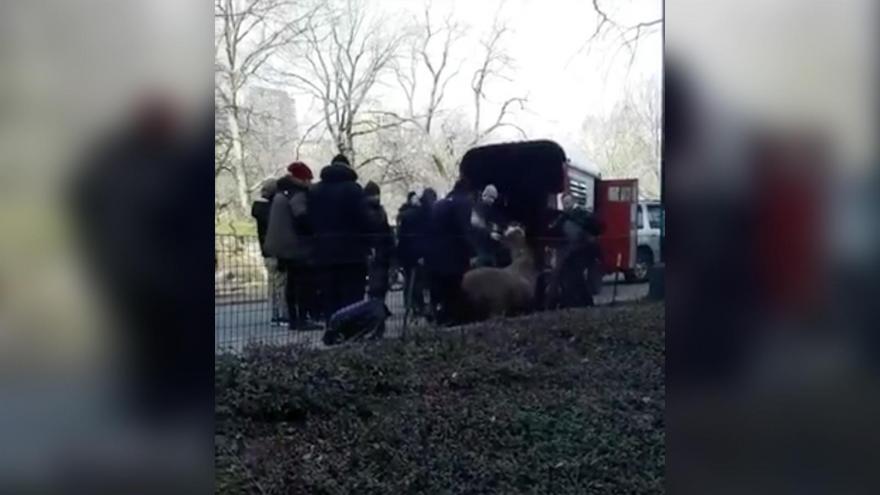 The horse, pictured here, is unable to stand as workers attempt to move it into the trailer.

(CNN) -- Animal cruelty authorities are investigating after a video was posted online of a carriage horse in New York collapsing in Central Park.

The video, posted Saturday by animal rights advocacy group NYCLASS, shows a carriage horse falling to the ground, unable to use its back legs. A separate video posted Sunday shows several people who appear to be trying to get the horse into a trailer, but the horse keeps collapsing.

That tweet, also from NYCLASS, accuses the people near the horse of blowing smoke it its face and brutalizing the animal.

Christina Hansen, a spokeswoman for Historic Horse-Drawn Carriages of Central Park, which represents the city's horse-drawn carriages, confirmed to CNN that the horse was euthanized Sunday evening, a day after the incident -- which she called an "acute medical emergency."

The horse showed sudden signs of distress Saturday afternoon after completing one ride. The vet and the emergency horse trailer were called immediately, Hansen said, before the horse's condition deteriorated and it collapsed.

"Unfortunately, she was never able to stand, apparently due to cardiac insufficiency in her hind end, and her owner, in consultation with the vet, made the difficult but humane decision to put her to sleep," Hansen said in the statement.

The lab work hadn't come in yet, but Hansen said they suspect a cardiac event.

NYC mayor says he is 'disgusted' by video

The video caught the attention of New York Mayor Bill de Blasio, who called the videos "painful" in a tweet on Sunday.

"We've made real progress in animal welfare but we must go further. The NYPD's Animal Cruelty Investigation Squad is on the case and WILL get answers," he wrote.

The mayor again tweeted about the situation Monday.

"Watching video of the dying carriage horse again, disgusted this is happening in our city," he said. "Why are these poor animals still being forced to work on the streets of America's largest city so a few humans can profit? This needs to end. When laws condone the inhumane, change them!"

NYPD Detective Annette Shelton told CNN, "The NYPD's Animal Cruelty Investigation Squad is investigating this incident and we are awaiting the results of the necropsy."

The New York City Department of Health said it was monitoring the situation throughout Saturday. This horse is the third one to die this year, the agency told CNN in a statement. The two previous cases were due to colic.

The debate surrounding horse-drawn carriages in New York has a long history. In late 2013, de Blasio -- then mayor-elect -- told reporters he planned to "get rid of horse carriages, period," calling the practice inhumane.

In 2018, the horses became restricted to Central Park. Last year, the city council prohibited their work on hot or humid days.

The Department of Health requires horses to receive a physical check-up at least twice a year, and owners are required to submit two certificates of health from a licensed vet.

Horses also receive five weeks of leave every 12 months. If a horse is deemed unfit by either the vet, the owner or the city, or if it's found the horse didn't get its deserved time off, the animal isn't permitted to return to work.

The department also investigates incidents, inspects stables and monitors the horses at work.