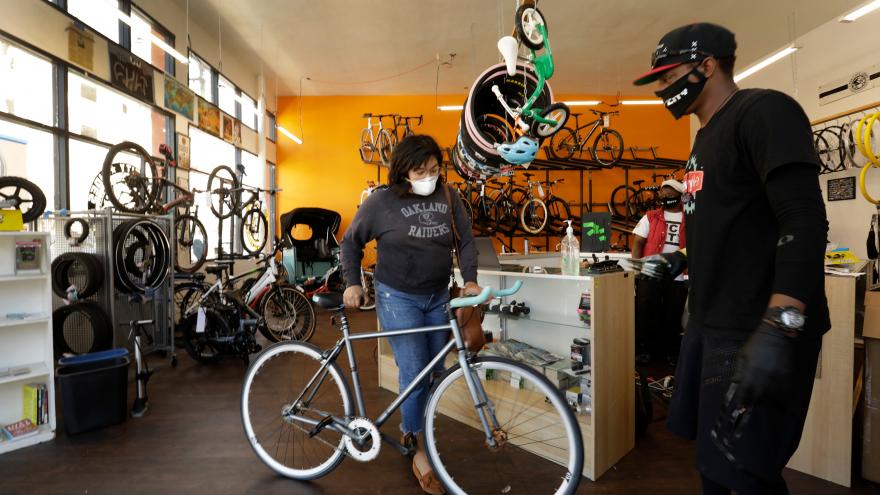 (CNN) -- Eric Attayi, owner of the Urban Bicycle Gallery in Houston, Texas, has watched the pandemic transform his shop in a way most businesses can only dream of.

Bicycles are selling before he has time to assemble them for display. Attayi said he'd matched his 2019 sales by the start of May. He's had to hire new employees to meet demand, and hasn't taken a day off since February. Attayi said he'd given raises and started buying lunch for his stressed staff.

As unemployment reaches record levels and small businesses scramble to survive, bike shops have been an exception.

They're thriving whether they're in car-dominated cities like Houston and Los Angeles or more traditional biking areas like Portland, Oregon, New York and Washington DC. Keeping enough bikes in stock, and finishing repairs in a timely manner, has become a challenge. Customers are being turned way, in some cases.

A recent survey from the National Bicycle Dealers Association found that 83% of shops are concerned about their inventory levels. Bike manufacturers are struggling to keep up.

"We're usually a pretty slow, chill shop," Attayi said. "Now the phone doesn't stop ringing. My guys get overwhelmed and I totally get it."

New customers are looking for ways to be active and outdoors. Bike shop owners say that the closing of gyms and yoga studios during the pandemic has contributed. Others say customers are looking for a commuting alternative to public transportation. Social spacing is easiest on individual modes of transportation, like cars and bikes. In March 2020, US cycling sales increased 39% when compared with March 2019, according to the NPD Group, which tracks retail sales.

"Bikes are like the new toilet paper," Attayi said. "If it's available, buy it."

Garfield Cooper, owner of ZenCog Bicycle Company in Jacksonville, Florida, has extra mechanics working to try to keep up with a repair backlog. Repairs that are usually done in 24 hours now require up to a month. Cooper, like Attayi, said he hadn't had a day off since February.

While his sales usually decline in the summer months with increased heat and humidity, Cooper said he hasn't seen a lag in business yet.

"It's been a long time since the bicycle has been this important to the American people," Cooper said. "It's so cool they're this interested in bike riding."

He's struggling to keep things like bike seats and helmets in stock. Cooper said he's regularly calling other shops to find parts he needs for repairs.

Robert Keating, who owns the Triathlon Lab outside Los Angeles, said he's never seen anything like the current bicycle boom in the 37 years he's worked in bike shops. He's shifted his shop from a focus on high-end bicycles to affordable bikes people are likely to ride in their neighborhood. Beach cruisers have been especially popular, he said.

Bike shop owners are also wondering how long the current boom will last. Some said customers were more interested in biking because with less car traffic, roads felt safer. Their interest may wane as traffic returns. But some cities have begun to reallocate street space to bike lanes, which could lead to more biking in the long term. Roughly 400 miles of protected bike lanes have been built in the US in the last decade, according to the advocacy group People for Bikes.

Phil Koopman, owner of BicycleSpace in Washington DC, compared the current bicycle boom to 1999, when many people bought computers to prepare for Y2K.

"Then those companies didn't sell a lot of computers for a few years because everyone already had one," Koopman said. "That's the big question. Is this a one-time thing or is it something sustainable?"