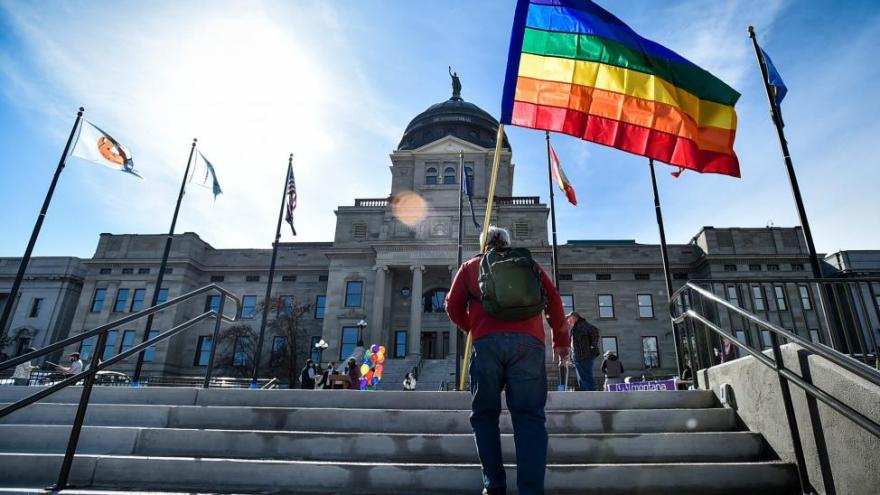 The NCAA says it "firmly and unequivocally supports" transgender athletes having the opportunity to participate in college sports as a growing number of states have moved to block them from competing. Demonstrators are shown gathering outside the Montana State Capitol in March to protest two bills that would target transgender youth.

(CNN) -- The NCAA says it "firmly and unequivocally supports" transgender athletes having the opportunity to participate in college sports as a growing number of states have moved to block them from competing.

"Inclusion and fairness can coexist for all student-athletes, including transgender athletes, at all levels of sport," the NCAA's Board of Governors said Monday in a statement.

The board, which is the NCAA's highest governing body, says it has a long-standing policy in place "that provides a more inclusive path for transgender participation in college sports."

"Our approach -- which requires testosterone suppression treatment for transgender women to compete in women's sports -- embraces the evolving science on this issue and is anchored in participation policies of both the International Olympic Committee and the U.S. Olympic and Paralympic Committee," the statement said.

The board discussed the issue last week at its April meeting, as dozens of states are considering measures that would prevent transgender women and girls from participating in women's sports and other anti-trans legislation.

South Dakota, Mississippi, Arkansas and Tennessee have enacted sports bans this year, and Arkansas passed a law that prohibits doctors from administering gender-affirming treatments to trans patients under 18-years-old.

The National Center for Transgender Equality welcomed the NCAA's statement.

"Every child deserves the love and support of the family and community. Dangerous proposals around the country are putting transgender young people at risk. The harm is real and is felt very personally by transgender kids just trying to live their lives as who they really are," said Deputy Executive Director Rodrigo Heng-Lehtinen in a statement. "The NCAA is making it clear that their Board of Governors supports transgender athletes, and the board should hold those states passing these harmful laws accountable."

The Board of Governors said in its statement that NCAA policy says that championships should only be held in locations where "hosts can commit to providing an environment that is safe, healthy and free of discrimination."

It said it was closely monitoring these situations to make sure that NCAA championships can be held "in ways that are welcoming and respectful of all participants."

"We are committed to ensuring that NCAA championships are open for all who earn the right to compete in them," the board statement said.