The NBA season resumes today. Here's where it and other sports leagues stand in restarting plans 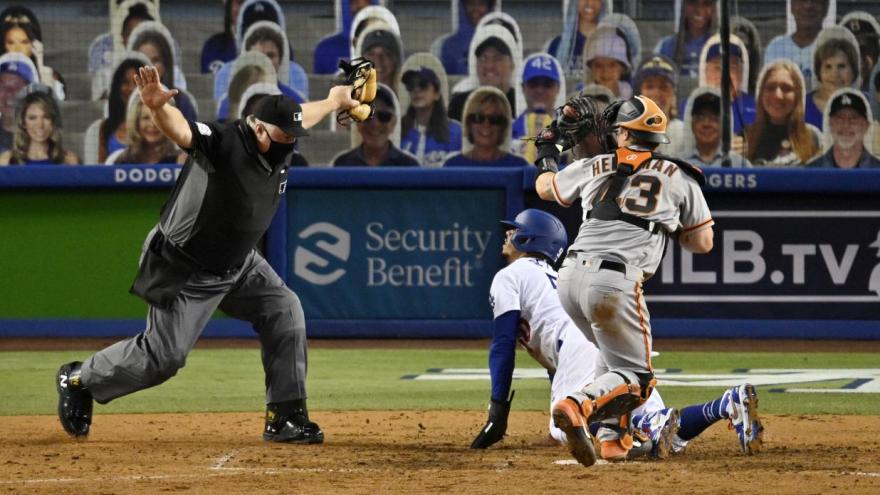 Mookie Betts of the Dodgers scores on Opening Day July 23 in Los Angeles.

(CNN) -- Months after the coronavirus pandemic shut down American sports, the games are returning. For now, at least.

Baseball and women's basketball have begun, hockey and basketball will return this week and football's season is just over a month away.

Their restarts have broad similarities. All of the professional leagues decided to sharply restrict or outright ban fans from attending, focusing instead on the television audience at home. They also will all be repeatedly testing players and staff for infection throughout the season.

They most sharply diverge in where the games will be held. Generally, sports with smaller roster sizes (NBA, NHL) are playing in "bubbles," isolated from the outside community, while sports with larger rosters (NFL, MLB) are playing at their regular stadiums and traveling between cities.

Here's where each league stands in its attempt to get back to the games.

When: Major League Baseball began its season on July 23, months after its usual April start. The plan is to play a 60-game season leading into an expanded playoffs from September 29 to the end of October.

Where: Games will be held at teams' regular stadiums, with no fans in attendance.

The Toronto Blue Jays, the league's only Canadian team, will play in Buffalo because the Canadian government did not approve its plan to continually cross country lines.

Commissioner Rob Manfred said Monday that holding the season in a "bubble" would not have worked because MLB has large teams and wants to hold a 60-game season.

"The duration would have been much longer, and the longer you go, the more people you have, the less likely it is that you can make the bubble work," he said.

Rules changes: MLB made changes to the sport itself as well as to the traditions surrounding it.

Also, high-fives and hugs are discouraged and spitting, that beloved baseball pastime, is banned.

Current status: Just days into its restart, more than a dozen players and staff on the Miami Marlins tested positive for coronavirus, pushing MLB to postpone several games and raising questions about its plans. All games on the Marlins schedule have been postponed through Sunday, MLB announced Tuesday.

Manfred downplayed the outbreak's severity and said they had built in protocols for just such an occurrence.

"I don't put this in the nightmare category," he said. "Obviously we don't want any player to get exposed. It's not a positive thing. But I don't see it as a nightmare. We built the protocols to allow us to continue to play."

Dr. Anthony Fauci, director of the National Institute of Allergy and Infectious Diseases, said on "Good Morning America" on Tuesday that baseball does not have to stop its season yet.

"You just have to watch this. This could put it in danger. I don't believe they need to stop, but we just need to follow this and see what happens with other teams on a day-by-day basis," Fauci said.

When: The National Football League begins training camps this week and plans to begin its season at its normal time in the second week of September. All preseason games were canceled.

Where: Games will be held at teams' regular stadiums around the country. It's not yet clear whether fans will be allowed to attend, but if they do they will have to wear face coverings.

Rules changes: Overall, the NFL has not changed much. Locker rooms have been reconfigured to accommodate social distancing, and players will be tested before arriving to training camp and then consistently throughout the season. Up to 80 players will be allowed in the team building at a time.

Current status: Dr. Allen Sills, the NFL's chief medical officer and a neurosurgeon, said to expect a "large number" of coronavirus cases during tests this week as training camp begins.

"First of all, we fully expect to have positive cases. We would love it if we didn't," Sills told CNN. "But if you look at the state of the pandemic right now, I think when players all gather together, we can expect a large number of positive cases."

In June, Dr. Fauci said he was skeptical of the NFL's ability to hold a season without an isolated bubble.

"Unless players are essentially in a bubble -- insulated from the community and they are tested nearly every day -- it would be very hard to see how football is able to be played this fall," he said. "If there is a second wave, which is certainly a possibility and which would be complicated by the predictable flu season, football may not happen this year."

When: After shutting down in March, the NBA's season resumes on Thursday leading into the playoffs from August 17 to October.

Where: All of the games will be played in a bubble at ESPN Wide World of Sports Complex at Walt Disney World Resort near Orlando, Florida. Players will live, practice and play within the bubble. Fans are not allowed to attend.

Rules changes: Only 22 teams will be returning to play. Each team will play eight regular season games before the playoffs begin for seeding. The NBA also added a potential play-in tournament for the 8th and final seed, but the playoffs will then continue as normal.

Current status: On track. Scrimmages tipped off last week. The NBA also said last week there were no positive Covid-19 test results from the 346 players tested since July 13.

When: The WNBA began its season on Saturday and plans to hold a 22-game season followed by a regular playoff format.

Where: All of the games are being held in a bubble at the IMG Academy in Bradenton, Florida. No fans are in attendance.

Rules changes: Players were required to quarantine before entering the bubble and will be tested throughout the season. Otherwise, the rules are as usual.

Current status: The season successfully began on Saturday and no players within the bubble have yet tested positive for coronavirus since then.

When: After shutting down in March, the National Hockey League holds its first exhibition game Tuesday afternoon leading into an expanded playoffs.

From there, the first round of the playoffs begins August 11 and lasts through October 4 at the latest.

Current status: On track. The NHL said Monday that there were no positive Covid-19 tests among the 4,256 tests given to more than 800 players from July 18-25.

When and where: The PGA Tour canceled a number of golf tournaments in March and April, but restarted its season in June and is gearing up for its majors.

The PGA Championship will be held August 6-9 in San Francisco, the US Open will be held September 17-20 in Mamaroneck, New York and The Masters will be held November 12-15 in Augusta, Georgia.

Rules changes: Players and caddies are subject to testing throughout a tournament week, ESPN reports. Because of that testing, international players are now allowed to arrive to the US and compete in tournaments without quarantining, the PGA Tour said.

Current status: Several golfers have tested positive for coronavirus since it resumed in June, but the sport's individual nature and outdoor setting have so far prevented a widespread outbreak among players or staff.

When: Tennis planned to restart its season with the Citi Open tournament on August 14 in Washington DC, but the even was canceled. Instead, the US Open, one of tennis's biggest events, is set to be held starting August 31.

Where: The US Open for men and women will be held in New York at USTA Billie Jean King National Tennis Center. It will be immediately preceded by the Western & Southern Open at the same site, USTA said.

Rules changes: Fans will not be allowed on site. The men's and women's doubles events will also be smaller, with 32 teams rather than 64.

"To mitigate risk, we must minimize numbers on-site," said Stacey Allaster, Chief Executive of Professional Tennis for USTA and newly named US Open Tournament Director said in a statement.

Current status: On track, for now, although the cancellation of the Citi Open offers warnings for the ability to hold the US Open.

When: Major League Soccer returned with its "MLS is Back" tournament earlier this month. The group stage began on July 8, and the 16-team knockout tournament began this past Saturday and continues until the championship match on August 11.

Where: All of the games are being held at the ESPN Wide World of Sports Complex at the Walt Disney World Resort in Florida.

Rule changes: All teams traveled to Orlando and were tested after arriving and through the rest of the tournament. Team members on the bench are required to wear masks and social distance, and players are asked not to exchange jerseys with other players or kiss the ball.

Current status: In progress. Two teams, FC Dallas and Nashville, are not participating in the tournament due to coronavirus outbreaks. The tournament is currently finishing up its first round and moving into the quarterfinals July 30.