The NBA has been around for more than 70 years. It's only now getting its 6th female referee 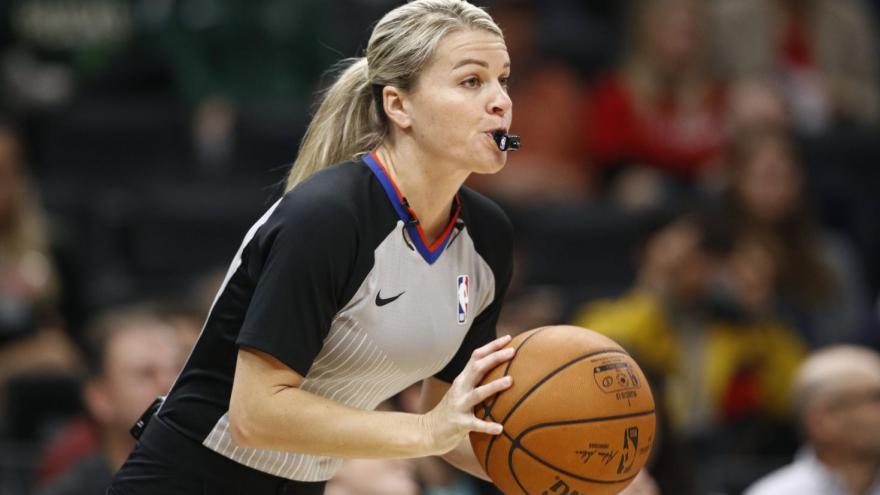 Referee Jenna Schroeder on the court during an NBA preseason game between the Milwaukee Bucks and the Washington Wizards on October 13.

(CNN) -- Men have been shooting hoops in the NBA, the nation's premier professional basketball league, for a while. Since 1946, to be exact.

But in that time, the league has only had a handful of female referees.

On Tuesday, the NBA announced that it was promoting Jenna Schroeder to its full-time officiating staff, making her the sixth woman to referee full-time for the league.

"Jenna has shown the requisite skill on the court and the knowledge of our rules to earn an opportunity to officiate NBA regular-season games," Monty McCutchen, the NBA's vice president of referee development and training, said in a news release. "She is the latest example of the NBA G League's impact as a valuable pipeline for our NBA officiating staff."

Holtkamp-Sterling became a full-time referee during the 2014-2015 season, while Sago and Moyer-Gleich joined the staff during the 2018-2019 season.

The NBA is well aware of the lack of diversity in its officiating ranks. Earlier this year, NBA Commissioner Adam Silver vowed to do better.

"It's an area, frankly, where I've acknowledged that I'm not sure how it was that it remained so male-dominated for so long," Silver said during an appearance for The Economic Club of Washington D.C., according to the New York Times. "Because it's an area of the game where physically, certainly, there's no benefit to being a man, as opposed to a woman, when it comes to refereeing."

Silver added that about half of the new referees that the league hires should be women.

"The goal is: Going forward, it should be roughly 50-50 of new officials entering in the league," he said. "Same for coaches, by the way. We have a program, too. There's no reason why women shouldn't be coaching men's basketball."

McCutchen told CNN on Thursday that the league had expanded its referee operations department in recent years to emphasize building a pipeline that would increase the pool of female and international referees. The new programs aim to identify and develop referees who could potentially be recruited to one of the NBA's three leagues: the NBA, the WNBA and the NBA G League.

In 1997, Violet Palmer and Dee Kantner became the first women to serve as referees in the NBA.

Palmer spent 18 seasons officiating on the court before retiring in 2016. She was also the first openly gay referee in the NBA.

Kantner spent five years in the league before she was fired in 2002.