The Navy is building a ship named after Harvey Milk, six decades after he was pushed out of the military because of his sexual orientation 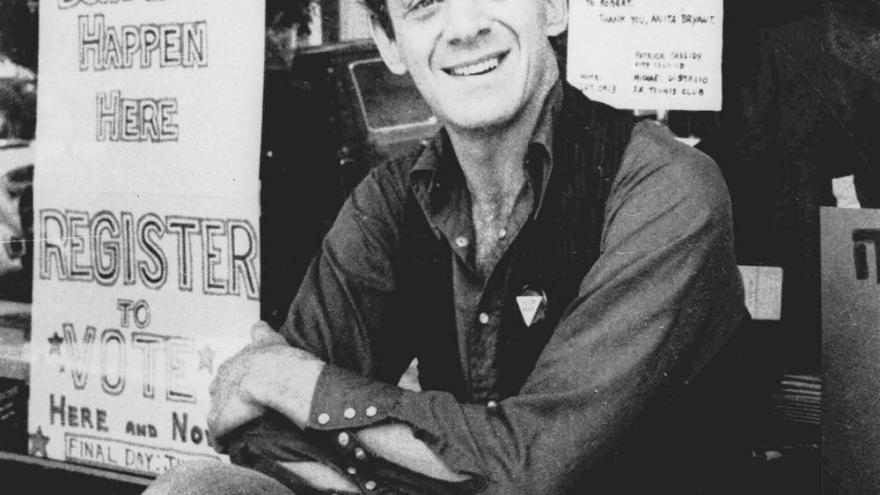 In this 1977 photo, Harvey Milk poses in front of his camera shop in San Francisco.

(CNN) -- Before Harvey Milk became a pioneering LGBT politician, he served in the Navy — and things were different.

During his time as a diving instructor in San Diego, California in the 1950s, his supervisors caught him at a park popular with gay men, according to his nephew Stuart Milk.

And in 1955, after the Navy officially questioned him about his sexual orientation, he was made to resign with the rank of lieutenant junior grade.

More than 60 years later, the Navy began construction Friday on the USNS Harvey Milk, a new oiler ship that will resupply fuel to other ships at sea.

"(This) sends a global message of inclusion more powerful than simply 'We'll tolerate everyone,'" Stuart Milk said at a ceremony in San Diego, according to the San Diego Union-Tribune. "(It says) We celebrate everyone."

The Navy announced in 2016 that it would name a ship after the veteran and gay rights activist who was assassinated in 1978.

The USNS Harvey Milk is one of the oilers in a class named after Georgia Congressman and civil rights icon Rep. John Lewis, which also includes vessels named for civil rights leaders such as Sojourner Truth, Lucy Stone and Robert F. Kennedy.

The move was welcomed by LGBTQ activists and the San Francisco Board of Supervisors, who in 2012 urged the Navy secretary to name a ship after Milk.

"When Harvey Milk served in the military, he couldn't tell anyone who he truly was," Scott Wiener, then a San Francisco supervisor, wrote after the 2016 announcement. "Now our country is telling the men and women who serve, and the entire world, that we honor and support people for who they are."

The military's policies on LGBTQ rights

Things have changed considerably in the military since Milk's service.

President Barack Obama repealed that policy in 2011, allowing LGBTQ people to serve openly in the military.

But some barriers still remain.

In April of this year, the Trump administration's controversial policy banning transgender recruits from joining the military went into effect.

A fierce advocate for LGBT rights

After moving from New York to California, Milk helped start the Castro Village Association, one of the first predominantly LGBTQ-owned business groups in the country. In 1977, he was elected to San Francisco's Board of Supervisors.

While serving as a city supervisor, Milk introduced legislation to protect the gay community, including a gay rights ordinance in 1978 to ban discrimination against LGBTQ in housing or employment. He and other activists also succeeded in striking down Proposition 6, which would have mandated the firing of gay or lesbian teachers in California.

Less than a year after Milk was inaugurated as city supervisor, he and Mayor George Moscone were shot to death in the San Francisco city hall by a former fellow city supervisor over a job dispute.

When his killer was sentenced to seven years, riots broke out over what many perceived to be a lenient sentence.

In 2009, President Obama posthumously awarded Milk the Medal of Freedom to recognize his contributions as a trailblazing advocate for LGBTQ rights.