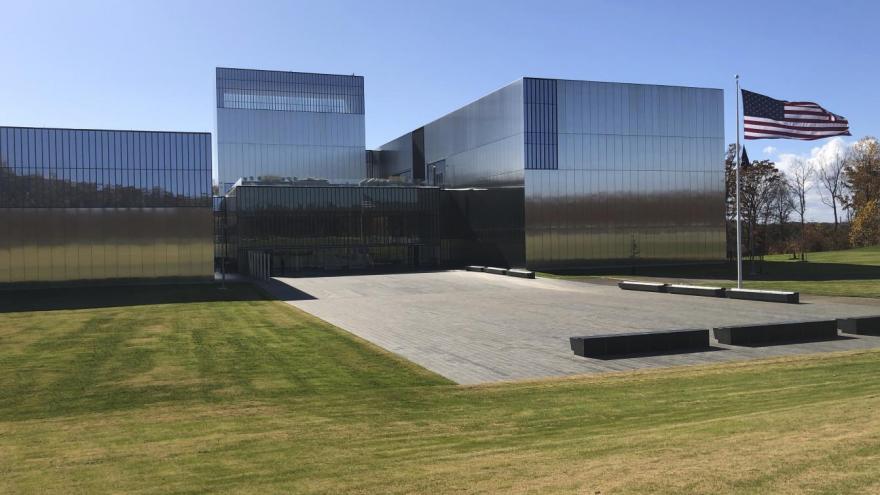 The National Museum of the United States Army contains the M4A3E2 Sherman "Jumbo" Tank that broke through German lines during the Battle of the Bulge in World War II.

(CNN) -- The National Museum of the United States Army opened to the public on Veteran's Day.

The museum, located approximately 30 minutes south of Washington D.C. on 84 acres of land at Fort Belvoir in Virginia, honors the service of the more than 30 million men and women who have donned an Army uniform since 1775, according to a news release.

A live-streamed virtual opening ceremony took place on opening day, and Army Secretary Ryan McCarthy, among others, made remarks during the ceremony.

The public and privately-funded museum cost $200 million to build, and construction broke ground in 2016, the release said. The 185,000 square-foot main building will display Army artifacts, documents, images and artwork, most of which have never been seen by the public.

A few notable artifacts will be on display: The M3 Bradley Cavalry Fighting Vehicle that led the 2003 charge from Kuwait to Baghdad, the M4A3E2 Sherman "Jumbo" Tank that broke through German lines during the Battle of the Bulge in World War II, and one of the few remaining "Higgins boats" that carried U.S. troops ashore to Normandy on D-Day during World War II.

"The U.S. Army has greatly aided the nation's progress and prosperity. Soldiers have conducted countless missions in the areas of exploration and discovery, science and technology, communications and cooperation, and recovery and disaster relief," retired Gen. Gordon R. Sullivan, chairman of the Army Historical Foundation, said in 2016.

"Nearly every major event in our nation's history has involved the U.S. Army, and this Museum will ensure those contributions and sacrifices are not lost to time."