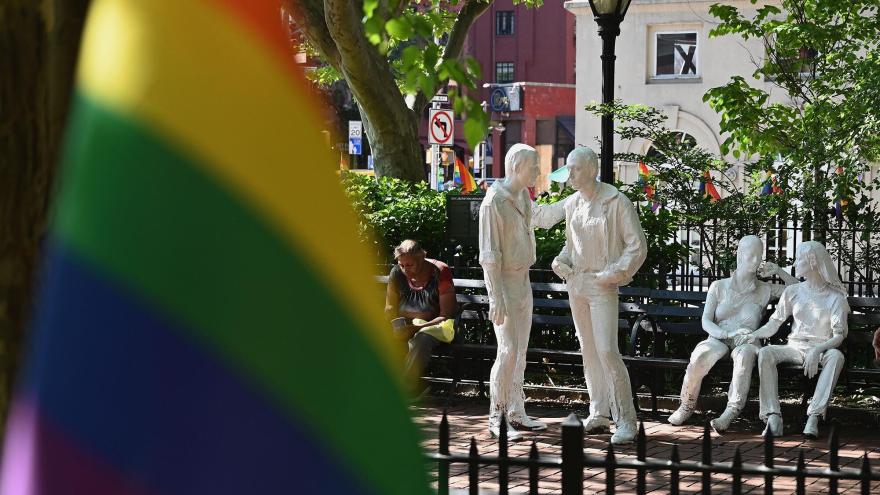 Rainbow flags and sculptures are seen at the Stonewall National Monument in New York City.

(CNN) -- A visitor center will open next to the iconic Stonewall Inn to honor and preserve the history of the fight for LGBTQ rights, the nonprofit Pride Live announced on Tuesday.

The nearly 3,700 square feet center in New York City is expected to open in the summer of 2024 after a groundbreaking ceremony is held on Friday, according to Pride Live, the LGBTQ advocacy group that will co-manage it with the National Parks Service.

"The opening of the Stonewall National Monument Visitor Center is a remarkable moment in the history of Stonewall," said Ann Marie Gothard, board president of Pride Live. "We honor all those who came before us, most especially the queer people fighting for equality at the Stonewall Rebellion."

The center is the latest effort to recognize the legacy of the 1969 Stonewall riots. While The Stonewall Inn continues operating as a bar, the area around it was designated by former President Barack Obama in 2016 as the country's first national monument to lesbian, gay, bisexual, transgender and queer (LGBTQ) rights.

The monument encompasses Christopher Park, the Stonewall Inn and the surrounding streets and sidewalks that were the sites of the 1969 Stonewall uprising.

The Stonewall Inn opened as a gay club in 1967 in the heart of Manhattan's bohemian Greenwich Village neighborhood. At the time, New York was notorious for its strict enforcement of anti-gay laws that made it risky for gay people to congregate in public.

When police raided the bar on June 28, 1969, its patrons, which included Black and Latin trans icons Marsha P. Johnson and Sylvia Rivera, fought back.

After police arrested many Stonewall patrons that morning, people protested outside the bar for weeks. Those protests are often credited as a flashpoint for LGBTQ rights in the United States.

The uprising became a catalyst for an emerging gay rights movement as organizations such as the Gay Liberation Front and the Gay Activists Alliance were formed, modeled after the civil rights movement and the women's rights movement. Members held protests, met with political leaders and interrupted public meetings to hold those leaders accountable. The first Pride parade was hosted on Stonewall's one-year anniversary.

The new visitor center will be at 51 Christopher Street, which is next to where the Stonewall Inn is currently located. That space was originally part of the Stonewall in 1969, the group says.

The center will offer in-person and virtual tours, art exhibits and will also be the home base for the monument's National Park Service staffers.

Pride Live said the visitor center is and will be funded by donations. A number of companies including Google, AARP, Target and Amazon have provided funding, the group says.

In a statement, National Park Service Director Chuck Sams acknowledged the historic legacy of Stonewall and said the visitor center will be a place for people to learn about the LGBTQ community's struggle for civil liberties.

"On this spot, an energized group of people created a movement for equality that continues to this day," Sams said.

Later this month, hundreds are expected to march past the Stonewall National Monument during the city's Pride celebration.

Correction: A previous headline incorrectly stated when the visitor center will open. It will be 2024.