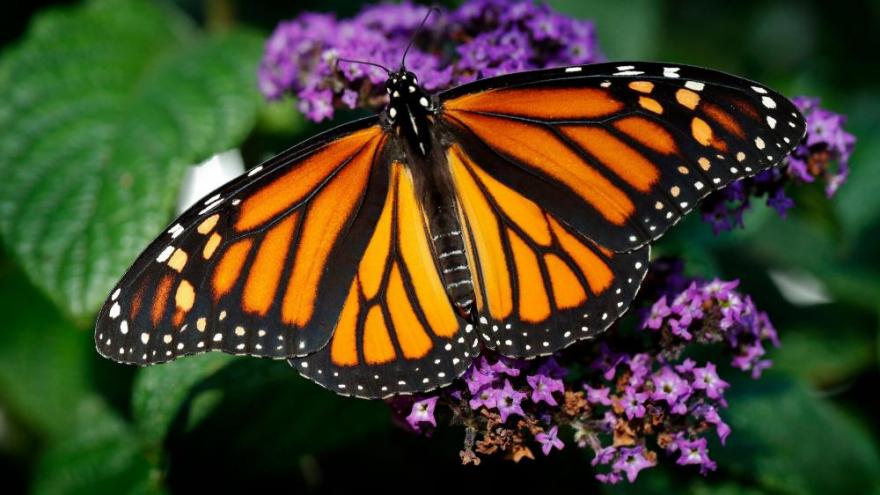 Western monarch butterflies are gorgeous and majestic. And they might be gone for good in a few decades.

(CNN) -- Western monarch butterflies are gorgeous and majestic. And they might be gone for good in a few decades.

That's what nature lovers are fearing after a conservation group reports the population of Western monarch butterflies has plunged by 86% since late 2017 in coastal areas of California.

The dire number comes from counts of the brilliant black-and-orange insects conducted every Thanksgiving by the Xerces Society, an international nonprofit dedicated to preserving invertebrates and their habitats. Monarch butterflies migrate to California and spend winters there.

"It's worse than anyone had anticipated," the Xerces Society says in a post on its website. "We are very troubled to observe such an apparently large decline in the population this year."

Pesticides, habitat losses and more frequent and severe droughts caused by climate change are believed to be the primary reasons for the decimation of the butterfly population, Xerces says.

Xerces estimates that the population in coastal California dropped from 148,000 butterflies in late 2017 to just 20,456 at the end of 2018. The count is not complete, and Xerces awaits numbers from other California sites, which should be in by the end of the month. But if the rest of the data shows the same trend, Xerces says there are probably less than 30,000 monarch butterflies spending this winter in California.

That compares with an estimated 192,000 butterflies in 2017, 1 million in 1997 and at least 4.5 million in the 1980s. That means the monarch butterfly population in California has dropped to less than 0.5% of its historical size. And with less than 30,000 insects in the state, the monarchs are right above the threshold of adults needed to sustain the population.

Scientists fear the species will be extinct within 20 years, according to a study published in 2017 in the journal Biological Conservation.

"The monarch population in California has gone from millions of butterflies to hundreds of thousands and now, possibly, mere tens of thousands. This is despite all the attention monarchs have received in the last few years and efforts by federal and state agencies, nonprofits, and many others to conserve them and their habitats," the Xerces Society says in its blog post.

"All this work has clearly not been enough to save Western monarchs. So while Western monarchs appear to be suffering from some particular bad luck this year, the real concern is that the population may not be able to bounce back from this very quickly given the cumulative impact of all the stresses the population has been facing for years and years.

"If we want to have monarchs migrate through the western U.S., as they have for centuries, sustained work is needed. Three decades of decline won't be overturned quickly," the group says.

To help save the species, Xerces advocates protecting the butterflies' habitats in California and other Western states.