The Mona Lisa has been caked in attempted vandalism stunt 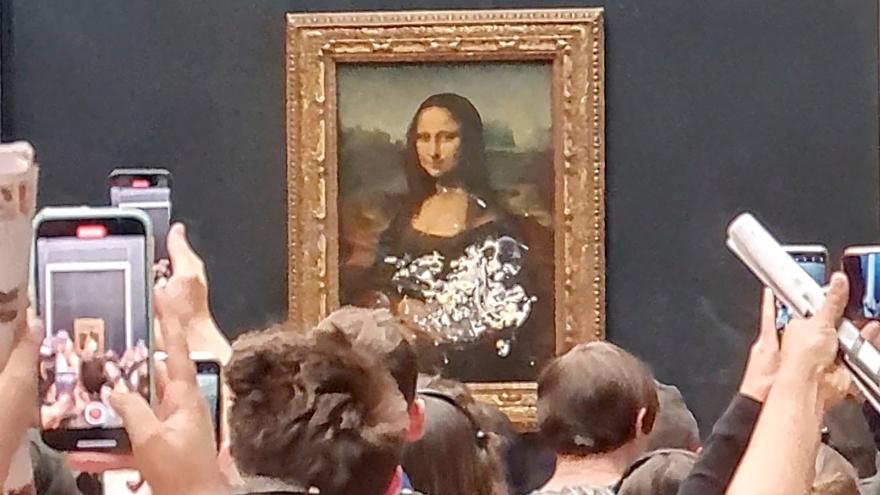 (CNN) -- The Mona Lisa was the subject of attempted vandalism on Sunday when a visitor to the world-famous Louvre museum in Paris smeared frosting all over the Renaissance-era painting's protective glass.

The man, who appeared to wear a wig on videos of the incident shared on social media, had the cake with him, according to CNN's affiliate BFTMV.

He approached the painting in a wheelchair, according to a statement from the Louvre. Videos of the aftermath show him on foot with a wheelchair nearby.

"A visitor simulated a disability in order to use a wheelchair to approach the work, which was installed in a secure display case. The Louvre applied its usual procedures for people with reduced mobility, allowing them to admire this major work of art," the statement noted.

"While standing near the painting, this individual threw a pastry he had hidden in his personal belongings at the Mona Lisa's glass case. This act had no effect on the painting, which was not damaged in any way."

The man, 36, was arrested and taken to a psychiatric infirmary in the police headquarters, according to the Paris prosecutor's office. An investigation has been opened by the prosecutor for "the attempt of damaging a cultural property." The Louvre has filed a complaint.

In a video published by a museum-goer on Twitter, the man is heard saying in French, "Think of planet Earth, there are people destroying it," while security escorts the man, with rose petals scattered on the floor of the museum.

Another video of the scene shows a staff member cleaning the icing from the glass.

Leonardo da Vinci's masterpiece, arguably the most famous painting in the world, draws millions of visitors each year who line up to pose with the small artwork, which is just over 2.5 feet tall and under 2 feet wide.

The enigmatic portrait is no stranger to both vandalism and thievery. It was stolen in 1911 by a Louvre employee, raising its international profile, and the bottom of the canvas suffered an acid attack in the 1950s, leading to its beefed-up protection -- including the bulletproof glass. In 2009, a woman angrily threw a ceramic cup at the painting, breaking the cup but leaving the painting unharmed.

This article has been updated with a statement from the Louvre.