The military is banned from using tear gas on the battlefield, but police can use it on crowds at home. Here's why 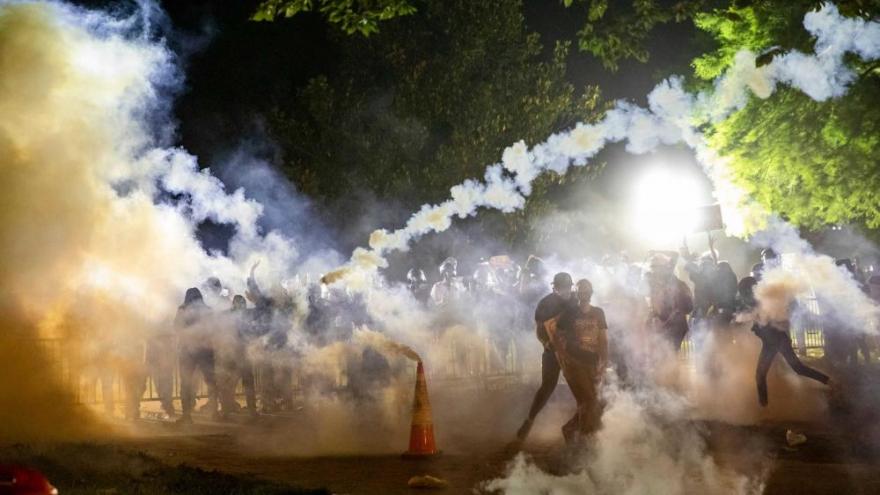 Tear gas rises above as protesters face off with police during a May 31 demonstration outside the White House. The use of tear gas to disperse crowds has come under criticism again as demonstrators nationwide continue protesting systematic racism and police brutality following the death of George Floyd.

(CNN) -- The use of tear gas to disperse crowds has come under criticism again as demonstrators nationwide continue protesting systematic racism and police brutality following the death of George Floyd.

Top health experts have warned that using the chemical agent could help the coronavirus spread because it irritates the lungs and makes people cough. And organizations such as the American Civil Liberties Union have pointed out that the chemical agent is banned in war.

If tear gas is banned on the battlefield, why then can law enforcement use tear gas on civilians at home? Here's what to know.

What tear gas is

First off, it's important to understand what exactly tear gas is.

Tear gas, also referred to as a riot control agent, is a chemical compound that can render people temporarily unable to function by irritating the eyes, nose, mouth, lungs and skin, according to the US Centers for Disease Control and Prevention.

The two most common riot control agents are chloroacetophenone (CN) and chlorobenzylidenemalononitrile (CS), the CDC says.

Despite its name, tear gas actually comes in a powdery solid form. The agents CN and CS are deployed as tear gas when the pressurized powder is mixed into a liquid formulation that is then released into the air as droplets or particles.

Tear gas can cause excessive tearing, burning or blurred vision, as well as a runny nose or a burning sensation inside the nose, according to the CDC. It can also cause difficulty swallowing, chest tightness, coughing, shortness of breath and a feeling of choking.

Someone who has been exposed to tear gas will usually experience its effects for about 15 to 30 minutes after they have been removed from the source and cleaned off, the CDC says. Those who are exposed to riot control agents at close proximity or in a closed space can experience long-term effects, such as blindness, glaucoma or respiratory failure.

How its use is legal

A few years after the end of World War I, world leaders convened in Switzerland and agreed to prohibit "the use in war of asphyxiating, poisonous or other gases, and of all analogous liquids, materials or devices" as well as "the use of bacteriological methods of warfare," according to the Geneva Protocol of 1925.

The agreement banned the use of chemical and biological weapons in warfare, though it did not specify what gases exactly were outlawed.

The US didn't ratify the agreement until 1975, under President Gerald Ford. When it did, it reserved the right to use riot control agents to control "rioting prisoners of war," among other exceptions.

Included in the agreement was also a ban on riot control agents in warfare. Such agents were defined as "any chemical not listed in a Schedule, which can produce rapidly in humans sensory irritation or disabling physical effects which disappear within a short time following termination of exposure."

The Chemical Weapons Convention went into effect in 1997. But notably, the agreement included an exception allowing law enforcement to use riot control agents for "domestic riot control purposes."

In recent years, tear gas has been used to quell civil unrest, not just in US cities, but in Hong Kong, Cairo and Rio de Janeiro.

Portland, Denver and Seattle are among cities that have suspended the use of tear gas to disperse crowds, at least temporarily.