At least 15 people have been killed in California, Oregon and Washington wildfires 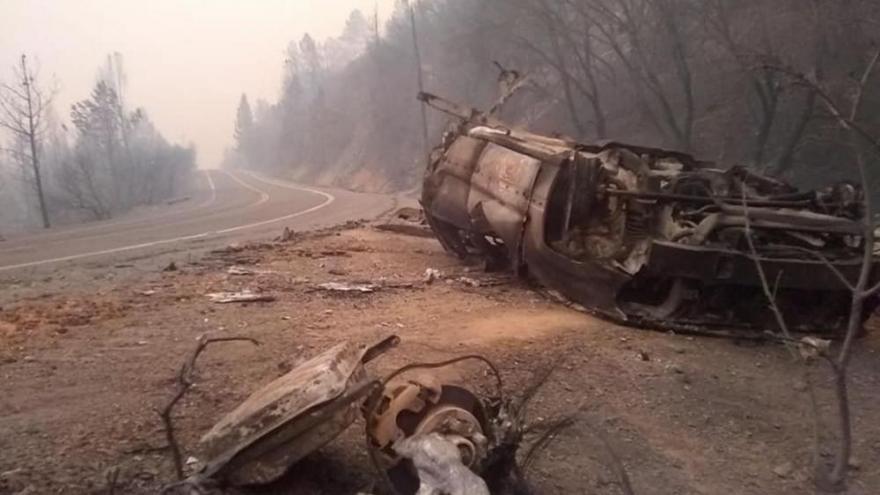 Authorities found seven bodies in Northern California on Thursday as firefighters battled multiple ravaging wildfires, raising the total number of victims in the state to 10.

At least five others have been killed in Washington state and Oregon this week amid a series of out of control wildfires.

The deadly, fast-moving wildfires ravaging across multiple West Coast states on Thursday have forced about 500,000 people in Oregon to flee their homes, state officials said.

The Oregon Office of Emergency Management estimates that about half a million people -- more than 10% of the state's population, according to the Census Bureau -- have been evacuated and "that number continues to grow."

The wildfires have left at least eight people dead in California, Washington state and Oregon this week, and were raging out of control Thursday despite firefighters' efforts.

Thick smoke has blanketed the region, and some communities in southern Oregon have already been reduced to ashes.

Firefighters from around the United States were called to help contain the massive blazes. As of Thursday, more than 100 wildfires across 12 Western states burned more than 4.3 million acres, according to the National Interagency Fire Center. That's nearly 7,000 square miles, or roughly the size of New Jersey.

One of the blazes, the August Complex fire in Northern California, is now considered the biggest in the state's recorded history, according to Cal Fire. It has consumed 471,185 acres and has only been 24% contained since it was sparked by storm lightning on August 17.

While the full extent of the damage remains unclear in many communities, the wildfires have taken a toll on human lives.

A child in Washington state was killed in the Cold Springs Fire, officials said Wednesday. Two of the child's relatives were airlifted to Harborview Medical Center in Seattle, where they're both in critical condition and being treated by burn specialists, according to a hospital spokeswoman.

Live updates on the wildfires

In Oregon, three people were killed in Marion County and one in Jackson County.

"We also fear that this is not going to be the only folks we'll find deceased up there," Marion County Sheriff Joe Kast said.

In California, officials said they are working to recover the remains of three people who died in Butte County, about 80 miles north of Sacramento, in the North Complex Fire.

"It was terrifying," resident Nancy Hamilton told CNN of the fires that tore through the Berry Creek area. "It was a beast. The thing is a beast."

Hamilton, a filmmaker, drove through the area Wednesday to get a closer look at the destruction. She says she is currently housing several families who were forced to evacuate their homes, including her best friend's 80-year-old grandmother, whose home was swallowed by the flames.

"They're pretty devastated," Hamilton said. "She just lost everything."

"I was able to take photos for her so at least she knows that it was gone," she said. "A lot of people don't know their houses are gone and they're wondering."

More than 14,000 firefighters are battling 28 fires across the Golden State, according to the California Department of Fires and Forestry Protection.

The North Complex fire has consumed more than 250,000 acres and was 24% contained as of Thursday morning.

In the central California mountains, the Creek Fire has destroyed more than 360 structures, fire officials said. It's now grown to more than 166,000 acres and remains 0% contained.

About 30,000 people were evacuated due to the fire, which is burning northwest of Fresno. But returning residents to their homes will likely be a lengthy process, Fresno County Sheriff's Deputy Lieutenant Brandon Pursell said Wednesday.

"It's going to be probably a couple weeks, just be patient with us," Pursell said.

Toby Wait and his family fled the fires over the weekend. "I went on my deck and looked out, and there was just orange flowing throughout the hills," Wait, a resident of Big Creek, told CNN.

Their home is one of dozens that have been lost to the Creek Fire. Now the family is sheltering with Wait's parents in Hanford and other family members in Fresno.

"We've taken refuge here. We're nomads right now," he said. "We've got our duffle bags and when we wear out our welcome, we move on to the next house."

Fire officials issued evacuation orders and warnings across several parts of the state including in Southern California, where the El Dorado Fire continues to burn parts of San Bernardino County and is 18% contained. In San Diego County, the Valley Fire -- which has burned more than 17,000 acres -- also prompted several evacuation orders and warnings.

On Wednesday, all 18 national forests in the state were ordered closed due to the "explosive growth" of wildfires, a notice from forest service officials said. Those temporary closures encompass more than 20 million acres of land.

"The number of large fires and extreme fire behavior we are seeing across the state is historic," said Regional Forester Randy Moore. "I ask all Californians and visitors to take these closures and evacuations seriously for their own safety."

Statewide, more than 2.5 million acres have been scorched this year alone, according to Cal Fire, and Gov. Gavin Newsom has pointed to climate change as a primary factor in the wildfires.

"Wildfires are a big part of the seasonal challenge," Newsom said. "The challenge we're facing now is the extreme fire events that we believe are climate induced."

Kevin McKay moved to Chico after losing his home in Paradise to the Camp Fire in 2018, the most destructive wildfire in state history.

The smoke has been bad for a couple weeks, he told CNN. Then on Wednesday morning, he awoke to skies blackened by smoke and ash from the North Complex Fire coating everything, he said.

"It's unnerving, to say the least," he said.

McKay said he doesn't feel like he's in direct danger this time around, but friends and family who have been impacted by the recent fires have asked for his help and advice.

"Since 2018, it's been a march to kind of put life back together," he told CNN Thursday. "We've had Covid now, and there's social discourse and unrest all over the nation. And then the fire comes back and just there's a bunch of anxiety I didn't realize was there."

"There's just this kind of relentless punishment that kind of keeps coming," he said. "To rationalize it, all I can say is Mother Earth is definitely fighting back here."

Authorities declared a state of emergency in Portland on Thursday evening, closing city parks and activating evacuation sites for people displaced by the threat of fires.

The emergency order, signed by Portland Mayor Ted Wheeler, says the city has " limited firefighting resources available" and many resources "are currently deployed to assist with firefighting efforts in other parts of the state."

Numerous wildfires in Oregon continued burning without containment on Thursday after nearly wiping out the southern cities of Phoenix and Talent.

Thirty-seven wildfires remain active -- down from nearly 50 earlier this week -- as 900,000 acres have been consumed across the state, the Oregon's office of emergency management said.

"We have never seen this amount of uncontained fire across our state," Gov. Kate Brown said in a news conference Thursday. She said that about 30,000 to 40,000 people have been forced to evacuate their homes.

The scope of the wildfires is unprecedented. For the past ten years, the governor said, the state has seen an average of 500,000 acres burned each year.

Among those impacted by the fire is Denise Moyle, who told CNN affiliate KATU that her family's home in Lyons was destroyed by the Santiam Fire, originally called the Beachie Creek Fire, in Linn County, approximately 70 miles south of Portland.

Moyle's family escaped early Monday after a phone call from a concerned neighbor. "We left not thinking we weren't going to have a home, so we left without much," Moyle told the news station.

The family found the smoldering remains of their home when they returned Wednesday morning. After sifting through what was left, they were able to recover just a few small items, Moyle said.

"I don't know where my family is going to go," Moyle told KATU.

Fire officials initially thought the fire would likely grow to less than 500 acres, but a "historic" windstorm Monday fanned the flames and the blaze grew to more than 131,000 acres in a night. The fire has now burned more than 158,000 acres and is 0% contained.

Wildfires have erupted in Washington in the past days, claiming the life of a child and leaving parts of the state experiencing unhealthy air quality conditions.

Gov. Jay Inslee described the blazes as "cataclysmic" while touring the massive damage in the town of Rosalina on Thursday.

"This is a place where the whole heart of a town was torn out," Inslee told reporters.

In the last three days, the wildfires have burned about 600,000 acres, which is more than in nearly "any single year in the history of the state," the governor said.

"The enormity of these fires, the geographical scope, the intensity, and the destruction are unequal in Washington State history," Inslee said.

The Sumner Grade Fire, just outside Tacoma, Washington, burned several homes and prompted hundreds of evacuations, CNN affiliate KOMO reported. On Wednesday, it was about 20% contained, the news station reported.

"In Western Washington, the old rule of thumb used to be if it was 20% you got out of the way because you were expecting erratic fire behavior," East Pierce Fire Chief Bud Backer said, according to the station. "But with homes in the way, we didn't have that luxury."

Backer says he was there when the fire exploded Monday, the affiliate said.

"When it hit, it was like a blow torch."

People have started returning to their homes in Graham, Washington, where several homes were destroyed in a brush fire caused by a tree falling on a powerline, CNN affiliate KIRO reported. One resident, Darrell Herde, said he barely escaped his home after he woke up Monday night to a stranger pounding on his door.

"He was yanking on my door and telling me to run. I thought he was a little nuts. I didn't think it was that bad," Herde said.

"Five minutes after, I walked out the door. It was crawling through trees," the 71-year-old said. "And you can't believe how fast those embers were flying at you."

He found his home a pile of rubble. Now he just has to clothes on his back.

"Someplace in that pile, there is my mother's rings, and it tore my heart out," he said. "That's something that sort of killed me this morning. The rest of this stuff -- it's stuff that you can replace."