The man suspected of killing a Houston-area deputy was wanted in Texas for a 1996 assault and in El Salvador for murder, DA says 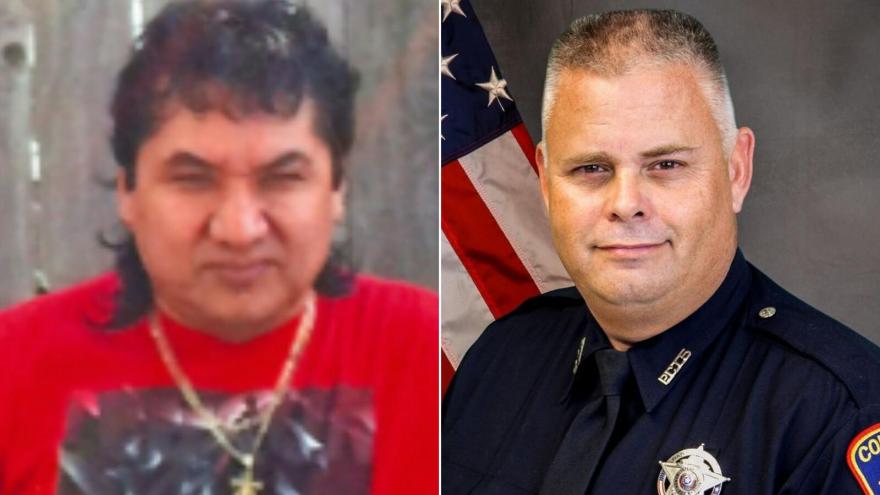 Oscar Rosales, 51, was wanted in the killing of Houston-area law enforcement officer Charles Galloway, according to police.

(CNN) -- The man suspected of killing a Harris County, Texas, deputy during a traffic stop over the weekend was wanted for crimes committed in 1996 in the county and also wanted for murder in El Salvador, the Harris County district attorney said Thursday.

The announcement came during a multi-agency news conference at Houston Police Department headquarters.

Oscar Rosales is in custody in connection with the Sunday death of Cpl. Charles Galloway of Harris County Constable Precinct 5, police said.

"Oscar Rosales, a 25-year fugitive out of Harris County for the crime of aggravated assault, has been violent before," Kim Ogg, the district attorney, said. "It is reported that he is wanted for murder in El Salvador during the time between his 1996 absconding from probation and the murder of Corporal Galloway."

"He (Rosales) absconded and literally evaded detection and capture by law enforcement on that open warrant for 25 years," Ogg said.

The district attorney added that given accusations of Rosales' prior violence, his potential gang or cartel affiliations and the violent nature of the current offense with which he is accused, she believes this is a death penalty case.

It was not immediately clear whether Rosales has an attorney.

Ogg said Rosales has gone by multiple identities and that the investigation and the gathering of evidence continues.

Rosales was arrested in Mexico

At about 11:30 a.m. CT, Mexican law enforcement transferred Rosales to US authorities through the Del Rio Port of Entry, Martinez said. The US law enforcement agencies that assisted with the transfer included members of the Val Verde County Sheriff's Office, the Texas Department of Public Safety and the US Marshals Service, Martinez said.

Houston Police Chief Troy Finner credited "great police and investigative work" for Rosales' apprehension. Finner did not go into the details of how Rosales was located or the circumstances around the arrest.

After Rosales was transferred to Val Verde County, west of San Antonio along the US-Mexico border, he was returned Wednesday evening to Houston in Harris County. Harris County jail records show he was denied bond.

"Rosales was brought back to Houston cuffed in slain Corporal Charles Galloway's own handcuffs," Harris County Constable Precinct 5 wrote in a tweet.

Rosales is from El Salvador and not a US citizen, according to court documents obtained by CNN. A handwritten note states that the "defendants rights were read in Spanish."

The documents show Rosales was arrested for the "capital murder" of a "Police/Fireman," which is a first-degree felony.

Capital murder charges were filed against Rosales earlier this week when Houston Police announced detectives had recovered video of Rosales shooting and killing the corporal during the traffic stop.

Rosales, 50, previously entered the US illegally, according to a spokesperson for US Immigration and Customs Enforcement.

"Rosales previously illegally entered the US on an unknown date and at unknown location without inspection or parole by US immigration officials and later fled to Mexico after allegedly murdering a Harris County Constables Office deputy," the spokesperson said.

Galloway, 47, made the traffic stop on a newer-model white Toyota Avalon just after midnight on Sunday when the shooting occurred, Finner said.

Witnesses said the suspect got out of his vehicle, fired at the corporal multiple times, and then drove off, he said. A witness told police an "assault-type weapon" was used, the police chief said.

"This is senseless. It makes no sense whatsoever," Finner said.

Two of Rosales' family members are in custody and have been charged with tampering with evidence, Ogg said. That evidence was the Toyota Avalon that was recovered by authorities, Finner said.