The Lutheran church elected its first transgender bishop, who will lead 200 congregations 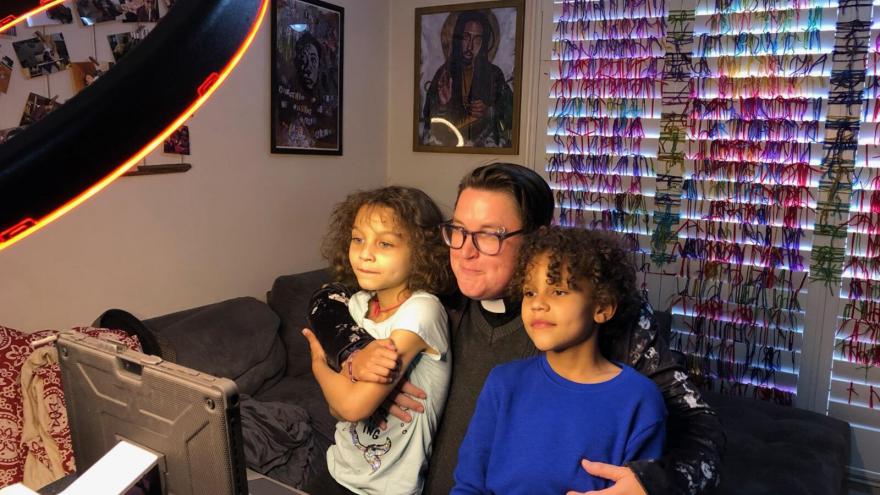 Rohrer said their children enjoy appearing in live streamed church services and are "very excited to be the kids of a bishop."

(CNN) -- The Rev. Megan Rohrer made history when they became the first transgender pastor in the Lutheran church. This month, they again broke new ground -- this time, as the church's first transgender bishop.

Rohrer was elected the Bishop of the Sierra Pacific Synod of the Evangelical Lutheran Church in America earlier this month. Throughout their six-year term, Rohrer will lead the synod, or a geographical grouping of congregations, which includes northern California and parts of Nevada.

Rohrer, who uses the pronouns they and them, describes their new role as being the "pastor of the pastors and cheerleader of almost 200 congregations."

"It's humbling," they told CNN. "It's inspiring. And I think I'm very aware that this call is bigger than me -- that it's about serving God, and it's about ... a place in history that means a lot to a lot of people."

Rohrer's served in the church for over a decade

The Lutheran church is just one of two Christian denominations, along with the Episcopal Church, that allows transgender members to serve as clergy.

Rohrer acknowledged that many Christian denominations have not been welcoming to trans people, them included. Their experiences with "religious abuse" -- including the belief that it's impossible to be transgender -- motivated them to study religion in college and eventually become a pastor in the Lutheran church, where they felt welcome, Rohrer told Cosmopolitan in 2018.

They were ordained in the church even before it accepted LGBTQ+ pastors and stuck with it after the church's policies changed in 2009 (the following year, Rohrer was formally recognized as a Lutheran pastor). They said they connected with the church's emphasis on serving the poor and advocating for community-based change, they told CNN.

Now, over a decade later, the church is welcoming Rohrer into their new leadership position without reservation. Presiding Bishop of the Evangelical Lutheran Church in America (ELCA), the Rev. Elizabeth Eaton, said that Rohrer's election is indicative of the church's focus on welcoming all patrons.

"The Spirit gives each of us gifts for the building up of the body of Christ. The Sierra Pacific Synod, in prayerful deliberation, recognized the gifts of the Rev. Dr. Megan Rohrer and elected them bishop," Eaton said in a statement to CNN. "This is historic, and as bishop-elect Rohrer mentioned following their election, this points people to the unconditional love of Jesus."

How their job changed during the pandemic

The pandemic forced Rohrer to change the way they led their congregation, Grace Lutheran Church, based in San Francisco. Instead of holding services in the church building, Rohrer hosts them live from their living room. Their children often make surprise appearances in the live streams, they said.

"For some people who've never seen a family like mine -- I'm married to a woman, and I have two Black children -- for people to see my family, it's really healing for some LGBTQ+ families," they said.

Rohrer's children are "very excited to be the kids of a bishop" and asked them if they can "only walk diagonally" as the bishop piece does in chess, they said.

Beyond their duties at Grace, Rohrer also spent the pandemic praying with first responders, including police and EMTs whose work became overwhelmed by Covid-19 (Rohrer is also the Community Chaplain Coordinator for the San Francisco Police Department). They also set up a phone line for a hospital chaplain to speak with medical workers when the pandemic kept them out of those spaces, Rohrer said.

That work seems supplementary to their primary duties of leading the congregation, but to Rohrer, it felt essential to continue to care for their community during a prolonged crisis. They said their example of leadership during the pandemic likely inspired electors to vote for them in the bishop election, which was delayed one year due to Covid-19.

They want to lead with humility and inspire others

Rohrer was encouraged to run for bishop by their pastoral colleagues, who've continued to support them in their election now. They're committed now, they said, to continuing to guide the 200 churches they'll preside over with humility.

They hope their new position inspires diversity in the church, they said.

"There have been a lot of people that have done a lot of work to remove hurdles in front of my path to be a minister," Rohrer told CNN. "As a bishop, I want to remove hurdles from the paths of others who may have a more difficult road to become a pastor."

Rohrer told CNN they begin their six-year term in July.