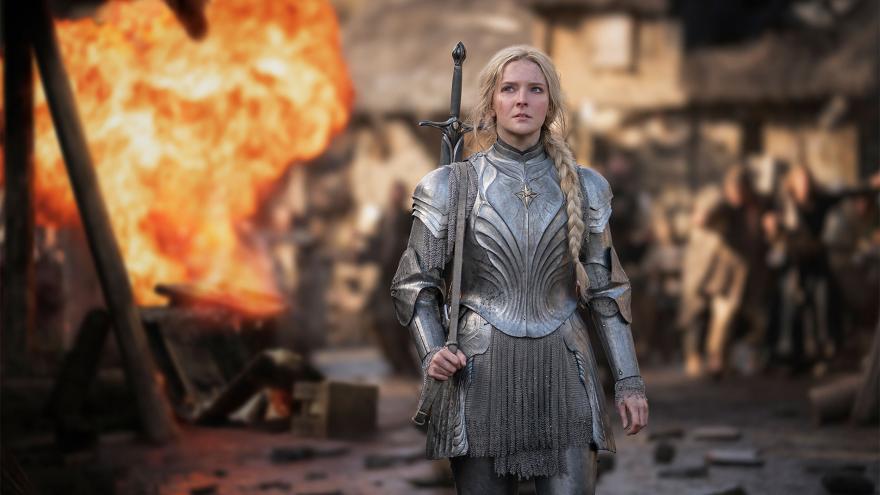 (CNN) -- Having invested hundreds of millions in mounting a series version of "The Lord of the Rings," Amazon has gotten its money's worth in production values but not storytelling, with a handsome prequel that could leave all but the most devoted Hobbits feeling more bored than lord. "The Rings of Power" should be a source of considerable curiosity, but amid an onslaught of big-budget streaming fare, this seems undeserving to rule them all.

Indeed, some of "The Rings of Power's" shortcomings echo those of HBO's lavish "Game of Thrones" prequel "House of the Dragon," which burns brighter by comparison. Based on the initial episodes, the gap between the characters audiences got to know in Peter Jackson's trilogy and their ancestral counterparts feels even more pronounced.

The series format -- episodes will drop weekly after the two-part premiere -- also tends to invite some bad habits versus even Jackson's notoriously long movies, with plodding interludes and a second episode that unfolds on multiple fronts without feeling as if a whole lot is happening, relatively speaking.

Enthusiasts of J.R.R. Tolkien's ornate world will no doubt be tempted to luxuriate in the centuries-spanning approach to this tale, which picks up with an extended prologue regarding a vast and costly battle with the forces of Sauron, and his subsequent disappearance. While some hope for lingering peace, the revenge-minded Elvish warrior Galadriel (Morfydd Clark) remains vigilant, convinced that, as she puts it, "Evil does not sleep. It waits."

Like "House of the Dragon," "The Ring of Power" has sought to feature women and people of color more prominently, while capitalizing on the ageless qualities of the Elves, among other things, to provide connections despite the gaping time lapse between this series and the movies.

Even so, the latitude provided by an episodic approach, and plans for multiple seasons, doesn't initially translate into more compelling characters, and after catching audiences up on the history, the buildup toward the meat of the story grinds slowly.

Gradually, "The Rings of Power" introduces an assortment of players representing the worlds of Men, Elves, always-colorful Dwarves and a Hobbit subset known as Harfoots (a distinction that, hopefully, won't be on the final). At times, as the series flits among them, it begins to feel like "The Lord of the Maps," splashing images of the various kingdoms across the screen as it navigates from one locale to the next.

Those locations reflect the scope of the production at its grandest, while the mythical beasts presented actually prove a bit more uneven.

Thus far, Amazon's formidable loot -- enough of an investment to become an inextricable part of the coverage -- has been brought to bear in the service of relatively uninspired storytelling, deficient in narrative urgency. The expectations raised by the title thus become something of a double-edged sword, particularly when so much has been made of promoting what a gargantuan effort this promised to be.

As for the epic battle that awaits, "The Rings of Power" might still rise to the occasion. Yet despite those beautiful, sweeping vistas of Middle-earth as the music swells and the camera pans across them, after the initial introduction it's hard to resist the temptation to say, "Wake me when you get there."

"The Lord of the Rings: The Ring of Power" premieres Sept. 2 on Amazon Prime.