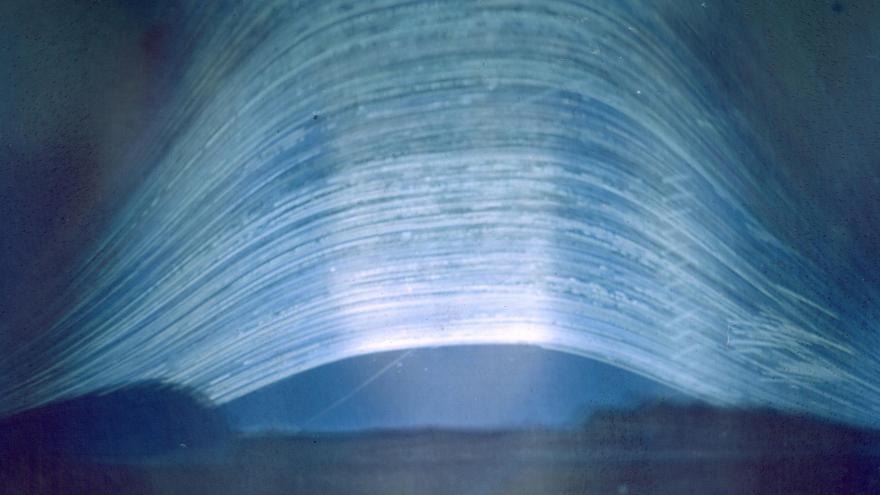 (CNN) -- A photo tracking the sun's cycles over more than eight years -- believed to be the longest exposure image ever taken -- has been discovered inside a cider can.

The image shows the 2,953 arced trails of the sun as it rose and set through nearly a decade of changing seasons.

Photographer Regina Valkenborgh was an fine-art student at the University of Hertfordshire in southern England when she decided to create a series of makeshift pinhole cameras by lining drink cans with photographic paper.

Valkenborgh told CNN that she began experimenting with pinhole cameras after noticing how digitally driven society was becoming.

"I wanted to see if there was still value in the old analogue style," she said, explaining that the style of photography allowed her to experiment with long exposures and miniature portraits.

In 2012, after a series of successful experiments with long-exposure photography, Valkenborgh placed the pinhole can cameras on a telescope at the university's Bayfordbury Observatory. The cameras stayed on the telescope, forgotten, until they were removed in September this year by the observatory's principal technical officer, David Campbell.

Valkenborgh said she presumed that all of the pinhole cameras were defunct, and after finding most of the images in the cans had failed, told Campbell to throw all of the cans away.

"Luckily, David had a look before he chucked it in the bin," Valkenborgh, now a college photography technician and visiting lecturer at the University of Hertfordshire, told CNN.

Inside the can was a remarkable image, which shows the evolution of the Bayfordbury Observatory -- the dome of the observatory's oldest telescope is visible to the left of the image, while the atmospheric gantry, which was built halfway through the exposure, can be spotted from the center to the right of the picture.

Long-exposure photography is often used to show the passing of time in a scene, and can be achieved in both modern or older cameras by leaving the shutter open for a prolonged period.

The record for the longest exposure image is thought to be held by German artist Michael Wesely, with an image tracking four years and eight months, according to the University of Hertfordshire.