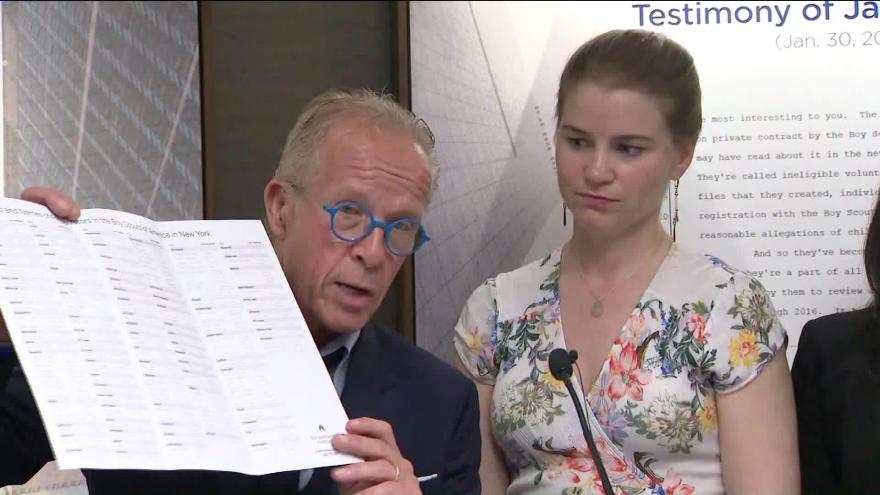 **Embargo: New York, NY** "What hadn't been known to us is the real scope of this," attorney Jeff Anderson said at a news conference in New York on Tuesday.

(CNN) -- The Boy Scouts of America believed more than 7,800 of its former leaders were involved in sexually abusing children over the course of 72 years, according to newly exposed court testimony -- about 2,800 more leaders than previously known publicly.

The Boy Scouts identified more than 12,000 alleged victims in that time period, from 1944 through 2016, according to the testimony, which was publicized Tuesday by attorney Jeff Anderson, who specializes in representing sexual abuse victims.

The numbers, Anderson said, come from what the BSA calls its volunteer screening database -- a list of volunteers and others that the Boy Scouts removed and banned from its organization over accusations of policy violations, including allegations of sexual abuse.

That 7,800 includes scout leaders and masters across the country accused of sexually assaulting "children under their charge," Anderson said Tuesday at a news conference in New York.

"What hadn't been known to us is the real scope of this," Anderson said.

"We care deeply about all victims of child abuse and sincerely apologize to anyone who was harmed during their time in scouting," the BSA said Wednesday in a statement.

"At no time have we ever knowingly allowed a perpetrator to work with youth, and we mandate that all leaders, volunteers and staff members nationwide immediately report any abuse allegation to law enforcement," the statement said.

The Boy Scouts emphasized that when someone is added to its volunteer screening database, "they are removed entirely from any scouting program" and prohibited from rejoining anywhere.

Anderson said the latest numbers were revealed in court testimony on January 30, in the course of a Minnesota child sex rape trial unrelated to the Boy Scouts.

Janet Warren, professor of psychiatry and neurobehavioral sciences at the University of Virginia, testified in that trial as an expert who knew about policies regarding protection of children from sexual abuse.

Besides her work as a professor, the BSA retained her in 2013 to research its ineligible volunteer database and to recommend how to make it more effective, according to BSA. Earlier, BSA had her review and write a 2012 report on 1,200 ineligible-volunteer files that were introduced in a 2010 lawsuit in Oregon.

In this year's Minnesota trial, an attorney asked Warren about her involvement with the Boy Scouts. In her answer, she said her review of the group's database showed the BSA revoked the registrations of 7,819 people from 1944 through 2016 on the belief that they were involved in sexually abusing a child, and that it had identified 12,254 victims.

Warren told reporters on Wednesday she expects to present her review in a more detailed manner this summer.

She said there is no evidence of a cover-up by the organization.

Parts of the BSA's ineligible volunteer list have been published before

Also in 2012, the Los Angeles Times reported that BSA was reviewing about 5,000 cases from the 1950s onwards, in which employees or volunteers were suspected of molesting children and were removed from the organization. The Boy Scouts announced the review days after a Times investigation based on an extensive review of files.

Later that year, the Los Angeles Times published a list of about 5,000 people expelled from the Boy Scouts between 1947 and January 2005 on suspicion of sexual abuse, having gathered the files from court cases in which they were submitted as evidence.

Partly at issue, Anderson said, is whether police were immediately told of all of the allegations.

After the initial release of the 1,000-plus cases, the BSA said in 2012 that it was reviewing files to ensure "all good-faith suspicion of abuse" had been reported to police." The group enacted a mandatory policy in 2011 requiring all members to tell police of possible child abuse.

Boy Scouts of America says it believes and supports victims

On Wednesday, the BSA said that "every instance of suspected abuse is reported to law enforcement."

"The organization went back decades and reported ... instances of abuse to law enforcement when it may have been unclear whether prior incidences had been reported," the BSA said.

It's not clear how many of those cases were prosecuted.

"We believe victims, we support them, and we have paid for unlimited counseling by a provider of their choice," the BSA said. "Nothing is more important than the safety and protection of children in scouting, and we are outraged that there have been times when individuals took advantage of our programs to abuse innocent children.

"Throughout our history, we have enacted strong youth protection policies to prevent future abuse, including mandatory youth protection trainings and a formal leader-selection process that includes criminal background checks," the statement said. "Since the 1920s, we have maintained a Volunteer Screening Database to prevent individuals accused of abuse or inappropriate conduct from joining or re-entering our programs, a practice recommended in 2007 by the Centers for Disease Control for all youth-serving organizations."

The BSA noted that:

• Youth protection training is mandatory for all registered leaders.

• The BSA requires that a youth is never alone with an adult leader during scouting activities and says that no youth is permitted to sleep in the tent of an adult other than his or her own parent or guardian.

Anderson on Tuesday followed his revelation of the BSA database numbers with a call for victims of child sex abuse to come forward and seek justice, even if the abuse happened long ago.

Reporting childhood sexual abuse decades after the fact may not lead to criminal prosecution or civil lawsuits, depending on states' varying statute of limitations laws. Even in states that are expanding their statutes of limitations for current and future crimes, Supreme Court precedent says criminal charges cannot be filed in an old case if a reporting time limit for that case ever expired.

But some states are allowing one-time "lookback" windows that would allow victims to file civil lawsuits even if the statute of limitations did lapse. That will be the case in New York when a "Child Victims Act" goes into effect on August 14.

"Survivors now have a chance to have (their) voice heard, acknowledged, affirmed, believed, supported," Anderson said of the New York law.

This story has been updated to more fully reflect Janet Warren's history of reviewing ineligible volunteer files on the BSA's behalf.