The latest Dictionary.com words include several from African American Vernacular English and phrases related to race and identity 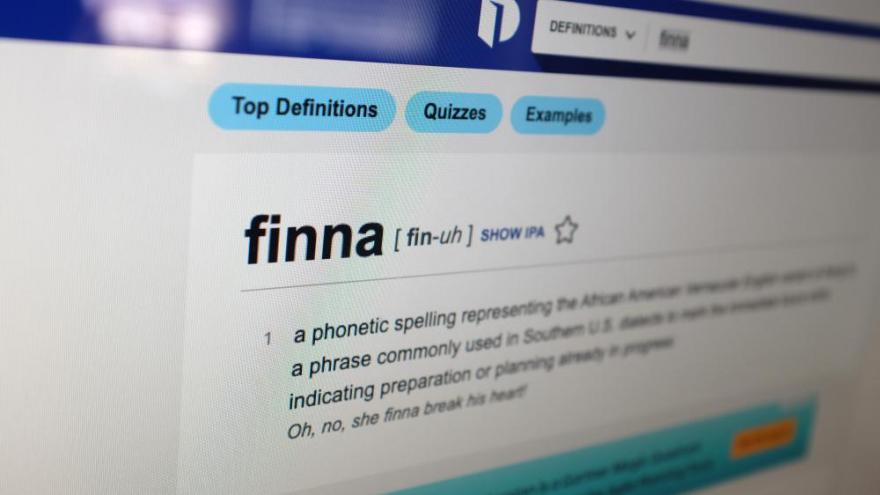 In the latest batch, Dictionary.com, added words such as "finna" and "chile" from the African American Vernacular.

(CNN) -- Adding a word to the dictionary has long been a sign of mainstream legitimacy. And in the latest batch added to Dictionary.com, the online dictionary has included multiple African American Vernacular English words such as "finna" and "chile," among other words and phrases related to race and identity.

The latest update includes 450 brand-new entries, 7,600 updated entries, and 94 new definitions on existing entries -- with a focus on race and identity, and Covid-19's effect on culture.

As society continues to reckon with racism, language is affected, said John Kelly, managing editor at Dictionary.com, in a statement on Thursday.

"We have added such terms as BIPOC, Critical Race Theory, and overpolice, which have risen to the top of the national discourse on social justice," Kelly said. "Another significant decision was to remove the noun slave when referring to people, instead using the adjective enslaved or referring to the institution of slavery. This is part of our ongoing efforts to ensure we represent people on Dictionary.com with due dignity and humanity."

The update also includes edits like capitalizing Indigenous when referring to the earliest known inhabitants of a region or their descendants.

Here are just some of the words and definitions added to the website, reflecting the ways in which the US has changed in the last year.

Antiracism - A belief that rejects "supremacy of one racial group over another and promotes racial equality in society."

BIPOC - An acronym for Black, Indigenous and People of Color.

Critical Race Theory - "A conceptual framework that considers the impact of historical laws and social structures on the present-day perpetuation of racial inequality."

Finna - "A phonetic spelling representing the African American Vernacular English variant of fixing to, a phrase commonly used in Southern U.S. dialects to mark the immediate future while indicating preparation or planning already in progress."

Reparation - "Monetary or other compensation payable by a country to an individual for a historical wrong."

Structural racism - Also called institutional racism or systemic racism, this refers to a policy or system of government that is rooted in racism, the website says.

Doomscrolling - "The practice of obsessively checking online news for updates, especially on social media feeds, with the expectation that the news will be bad."

Sourdough - "Fermented dough retained from one baking and used as leaven, rather than fresh yeast, to start the next."

Superspreader - "A person who spreads a contagious disease more easily and widely than the average infected person."

Telework - "To work at home or from another remote location."

Unmute - "To turn on (a microphone, a speaker, or audio), especially after it has been temporarily turned off or when muted sound is the default."

Zoom - "The brand name of a software application and online service that enables voice and video phone calls over the internet."