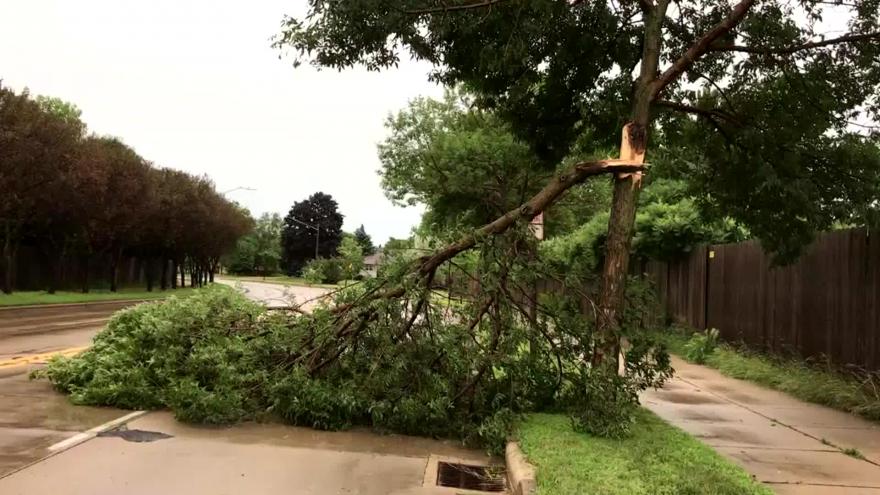 MILWAUKEE (AP) — The Latest on storms that moved through Wisconsin on Friday and Saturday (all times local):

Storms that swept through Wisconsin on Saturday are being blamed for two injuries in Trempealeau County, and authorities are investigating whether the storm was a factor in two deaths.

The Trempealeau County Sheriff's Office says one woman in Galesville was cut by flying glass Saturday when a window blew in during the storm. A man in the town of Gale was also injured when he was hit by a tree that fell into a camper he occupied.

WSAW-TV is reporting that fire officials in Wausau are investigating whether a lightning strike caused a mobile home fire that left one man dead Saturday.

And in Trempealeau County, officials say weather is believed to be a factor in a fatal crash that happened Friday night, but that is also still being investigated.

We Energies says weekend storms have caused so much damage to its network in the Fox Valley area that customers could be without power for multiple days.

As of 4 p.m. Saturday, more than 70,000 We Energies customers were without power in Green Bay and the surrounding area after storms moved through the area on Friday and Saturday.

In a statement Saturday afternoon, We Energies says the extent of the damage will require the utility company to rebuild parts of its network. The utility has asked for assistance from other utilities in the Midwest to help get power restored.

Some Wisconsin residents were cleaning up from a round of heavy wind and rain while others braced for more severe weather as storms moved through the state.

The power outages affected about 6,000 customers in southeastern Wisconsin, including the Milwaukee area, which was under an excessive heat warning until Saturday night. The cities of Milwaukee and Waukesha posted a list of cooling sites online, where residents could go to stay safe in the intense heat.

Meanwhile, residents in western Wisconsin were cleaning up after Friday's storms downed several trees and power lines and damaged buildings.

Heavy rain and fierce winds left downed trees, damaged buildings and thousands of people without power in Wisconsin as a heat warning remained in effect for parts of the state.

There were no immediate reports of injuries from Friday's storms. The Trempealeau County Sheriff's Office says weather is believed to be a factor in a fatal crash in Whitehall, but they are still investigating.

Wind gusts reached more than 80 mph in some areas as the storms toppled trees from western Wisconsin to Green Bay. There were multiple reports of trees falling on homes and other structures.

In Turtle Lake, winds ripped part of the roof from a bar and bowling alley. The Milwaukee Journal Sentinel reported that a confirmed tornado destroyed a barn in Marathon County.