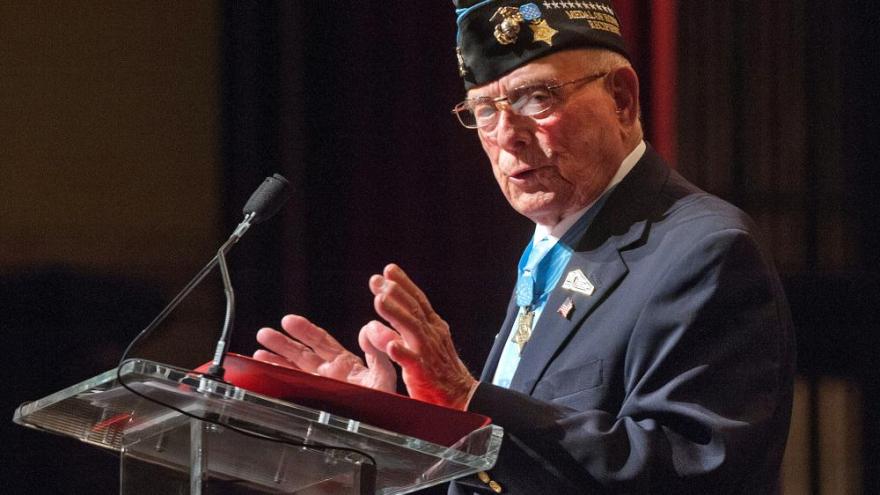 (CNN) -- Hershel Woodrow Williams, the last surviving World War II Medal of Honor recipient, has died, according to the Woody Williams Foundation. He was 98 years old.

"Today at 3:15am, Hershel Woodrow Williams, affectionately known by many as Woody went home to be with the Lord. Woody peacefully joined his beloved wife Ruby while surrounded by his family," his foundation said in a statement Wednesday.

Williams earned his Congressional Medal of Honor during the Battle of Iwo Jima for displaying "valiant devotion to duty." It was presented to him by President Harry Truman in a ceremony at the White House on October 5, 1945.

In 2017, a military vessel was also named in his honor, the foundation's website says.

Born on a dairy farm in Quiet Dell, West Virginia, in 1923, Williams served 20 years in the Marine Corps and Marine Corps Reserves, according to the foundation.

In the early days of World War II, Williams delivered telegrams informing Gold Star families that their loved one had died, the foundation website says -- an experience Williams said helped him appreciate life and better understand the "difference in death in the normal world as expected in life, and those lost serving in the military for their country."

After the war, Williams worked for 33 years in the Department of Veterans Affairs. He also created the Woody Williams Foundation to support and advocate on behalf of Gold Star Families after his time as a Marine, according to the foundation's website.

Williams' family shared that "Woody's wish is that people continue to carry on his mission," according to the foundation.

West Virginia Gov. Jim Justice has offered a State funeral to be held in Williams' honor, as well as for his body to lie in state at the West Virginia Capitol.

"While the weight of this loss is profound, we all will be able to take solace in the fact that Woody's contributions to our nation inspired generations, cultivated similar bravery, and saved lives," Justice wrote. "Woody Williams will go down in history as one of the greatest West Virginians who ever lived, and we salute him for everything he gave to our state and our nation."

Justice will also sign a statewide proclamation to lower all West Virginia and US flags to half-staff in Williams' honor.

The National WWII Museum said they mourn the loss of the 98-year old. "As Williams and the last members of the WWII generation pass on, we are reminded of our critical responsibility to keep their stories alive for generations to come," they said in a Facebook post.

Details regarding memorial and funeral services have yet to be announced.