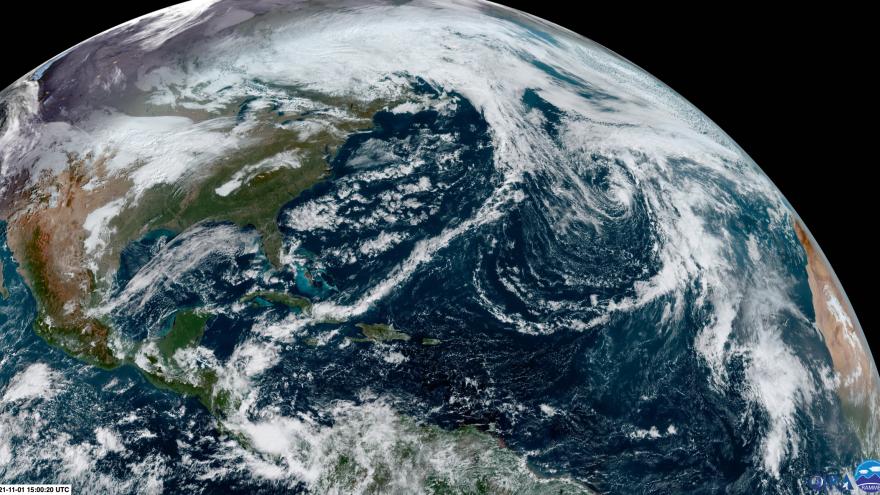 (CNN) -- With one month to go before Atlantic hurricane season shuts down for 2021, we've just used the last name on our list -- Wanda.

"Traditionally, by November 19th, we would only have our 14th named storm, but this year we've had 21 before the month even started," said CNN meteorologist Allison Chinchar.

If more storms develop after Subtropical Storm Wanda, which isn't going to impact the United States because it's well out in the Atlantic, weather officials will have to consult a brand new list!

In years past, we used the Greek alphabet to name storms after the main list of names was exhausted. But after needing it multiple times in recent years, several of the Greek letters were worthy of retirement -- AND it became confusing on many levels.

Therefore, a supplemental list has been created for times like these -- when the last name on the alphabet list has been used and hurricane season is still weeks away from ending.

After Wanda, which will meander north for the next few days before turning to the southeast, we will see Adria, Braylen, Caridad, Deshawn and so on.

Now that La Niña has formed in the Pacific, the chances of a few more storms popping up before the end of the season is a definite possibility.

"Last year we had three named storms develop in November, two of which were major hurricanes (Eta and Iota). This was due in large part to La Niña," said Chinchar.

While the season is winding down, if the ingredients are there, we could see more.

"Climatologically speaking, storms in November are most likely to develop in the western and northern Caribbean Sea, as well as in the central Atlantic near the 30°N latitude and 50°W longitude benchmark," said Chinchar.

Right now we are watching Wanda as well as an area of low pressure several hundred miles west of the Cabo Verde Islands.

This low pressure system will enter a region far less favorable for development in the next few days, so the likelihood of major storm emerging is slim.

"Remember that Atlantic hurricane season goes through November 30th, so we still have plenty of time for storms to develop," said Chinchar.

With 21 named storms, including seven that became hurricanes, the 2021 season has been an especially active one. Four of those hurricanes became major hurricanes (category three or higher).

One of the most notable storms of the season was Hurricane Ida. The category four storm made landfall in southeast Louisiana, destroying homes and businesses.

Then days later brought catastrophic flooding to the northeast. It left millions of people in the dark for weeks after the storm, during a massive heatwave, which killed even more people.

Ida has also been the costliest disaster of the year, with the bill already topping $60 billion and climbing. Ida, in fact, will go down as one of the top 5 costliest hurricanes on record.

More relief for the drought-stricken West

Several more storms are expected to impact the West this week, bringing rain and snow to some of the driest parts of the country.

"The rain and snow this week is not forecast to be as heavy as last week," said CNN meteorologist Dave Hennen. "But it will help to bring relief from the drought, especially across northern parts of California."

The heaviest rain should be right along the coast. Washington, Oregon and northern California, north of the Bay area, should see four to six inches of rain through the week.

You're trapped in a blizzard. Do you know what to do next to survive?

Meanwhile, chilly air will settle in for much of the country as cold Canadian air pushes south.

"Over 6 million are under freeze alerts in the Midwest and Northeast, with over 110 million people expected to experience below freezing temperatures this week," said Hennen.

Temperatures as much as 25 to 30 degrees below normal are forecast Monday in the Plains as the cold air spreads east. The cold will stick around for much of the week. By Thursday night, states as far south as Louisiana will dip below freezing.

The temperature in Dallas, Texas, will only reach 55 on Wednesday and Thursday, before dipping into the 30s Thursday evening. By the end of the week, most areas will see temperatures return closer to normal.

Recent rains in California lit up Yosemite's famed "firefall" for an unexpected treat for park visitors.

Yosemite National Park's El Capitan has been running dry lately because of the lack of rainfall.

But Yosemite Valley got more than 6 inches of rain in less than two days this past week and the Horsetail Fall started running again and it didn't disappoint.

The glowing ribbon of water looks more like molten lava cascading down. This phenomenon usually doesn't happen at this time of year, but the rain helped the waterfall flow again.

The "firefall" usually occurs on clear evenings in late February when the setting sun shines through the falls at just the right angle.

While the weekend's aurora borealis display was a bit of a bust for millions around the world -- especially for those in the US -- some people around the world did get a treat that is pretty rare.

The rare red borealis, which lit up the night sky in brilliant shades of red, was visible in places like New Zealand and England.

While the aurora borealis usually dances yellow and green ribbons across the sky, the red sky occurs at much higher altitudes.

The green glow of oxygen atoms occur about 150 km above the Earth's surface, where the red auroras occur up to 500 km above the surface.

COP26 (Conference of the Parties) brings together almost every country in the world for a climate change summit.

You may remember COP 21, where the Paris Climate Agreement was born.

Every country agreed to work together to limit global warming to below 2 degrees and to aim for 1.5 degrees.

They also decided to come back and update their plan every five years.

This year's summit was delayed a year because of the pandemic, but the meeting could be the most important yet as country leaders meet while the world continues to warm at an alarming pace.