The largest wildfire in the US has grown about 1,000 acres every hour 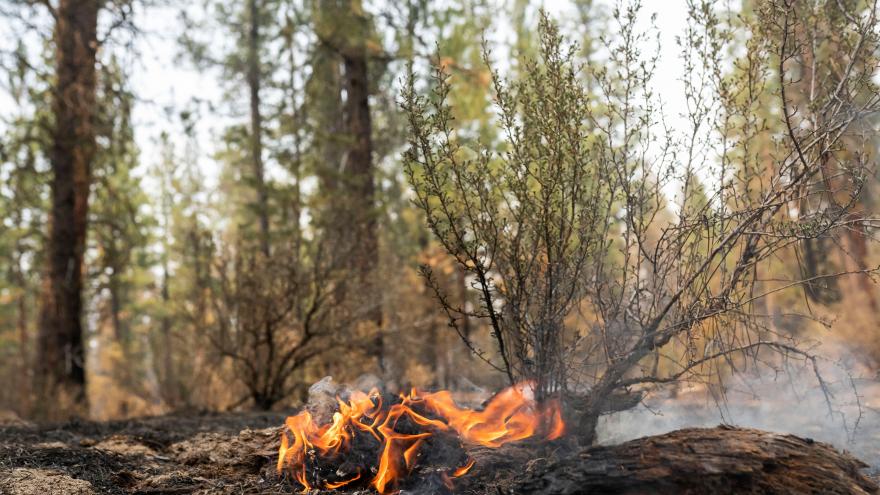 (CNN) -- The Bootleg Fire, the largest wildfire in the United States this year, has scorched more than to 240,000 acres since it first started 10 days ago in southern Oregon, according to the latest report from InciWeb.

That means the blaze has spread around 24,000 acres per day on average, or just over 1,000 acres every single hour. That's an area larger than the area of Central Park each hour, or a rate of a football field burned every 5 seconds for 10 days, CNN meteorologist Brandon Miller said.

The fire, which began July 6 in the Fremont-Winema National Forest and on private lands near the town of Sprague River in Oregon, has charred 241,497 acres and remains just 7% contained, according to InciWeb, the clearinghouse for wildfire information across the country.

Communities around Summer Lake and the town of Paisley were being evacuated, officials reported on the Bootleg Fire Facebook Page. Because of "extreme wildfire behavior," crews pulled back early from vulnerable areas and were regrouping, the Facebook page said.

"The Bootleg Fire perimeter is more than 200 miles long. That's an enormous amount of line to build and hold." said Rob Allen, incident commander for the Pacific Northwest Area Incident Management Team 2, in an online update.

"This fire is going to continue to grow -- the extremely dry vegetation and weather are not in our favor," said Joe Hessel, an incident commander for the Oregon Department of Forestry.

Bootleg is one of 10 wildfires currently burning in Oregon, which was recently baked in the historic heatwave that swept across the West.

The fire has destroyed at least 21 homes and put another 2,000 at risk, state fire officials said.

The severity has led California officials to send even more firefighting resources to the state.

"California's latest mutual aid deployment to Oregon comes just a day after the National Multi-Agency Coordinating Group elevated the National Preparedness Level to Level 5 -- its highest level -- due to high fire activity across the country and resources committed to large fires," Gov. Gavin Newsom's office said in a news release.

"Climate change impacts are contributing to wildfires that are increasingly dangerous and destructive across the Western U.S.," he said.

But Oregon is facing another problem that could hinder firefighting efforts: jet fuel shortages.

Lake County Airport in Oregon was unable to refill its Jet A aviation fuel supply until Wednesday after running out on Sunday, the county's sheriff's office said in a news release. The airport is home to a helibase where the helicopters fighting the Bootleg Fire refuel and fly out to battle the blaze, said Jamie Knight, public information officer for the Bootleg Fire.

The airport manager placed an order for fuel six days earlier, but delivery was delayed due to a national shortage, the sheriff's office said.

Fortunately, the shortages haven't yet impacted firefighting, Knight said, adding that Jet A is a type of aviation fuel used in turbine engines, air tankers and helicopters.

"We have had close to critical shortages," Knight said. "We haven't had a point where lack of fuel has stopped operations."

Ocean Air Aviation delivered 3,500 gallons of Jet A on Wednesday, and Lake County's supplier, Phillips 66, is expected to bring 8,500 more gallons of Jet A fuel Friday, the sheriff's office said.

Wildfires continue to tear through the West

As of Thursday, the United States was grappling with 71 fires and complexes that have burned 993,678 acres so far, according to the National Interagency Fire Center.

In addition to the nation's largest in Oregon, the Log Fire was sparked northeast of The Bootleg Fire and has charred nearly 5,000 acres.

In Washington state, the fast-moving Red Apple Fire in Chelan County that began July 13 has burned 11,000 acres and remains 10% contained, according to Inciweb.

Authorities have placed 1,500 homes are under evacuation notifications, the Chelan County Sheriff's Office said in a news release.

Meanwhile, California's Butte County is battling the Dixie Fire, which has grown to 2,200 acres with no containment, according to CAL Fire. Residents there are also under evacuation warnings.