The Kabul airlift has ended, but a US operation to get 14,000 people off a base in Germany is far from over 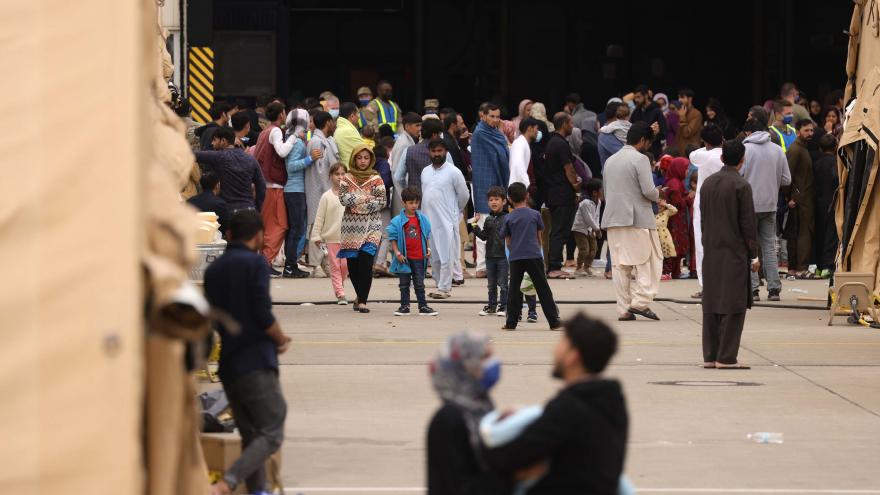 (CNN) -- From his office window, Brigadier General Joshua Olson can see a daily football match organized by the Afghan children who are temporarily calling his air base home.

"This is now my family -- at least until they get off our airpatch," Olson, the installation commander at Ramstein Air Base in Germany, told CNN as we drove past tent after tent. "It's my family and I got to figure out how to protect them."

Ramstein is one of the largest US airbases outside America and has become a crucial hub for the evacuation from Afghanistan following the Taliban take over. Since August 20, about 106 planes have landed there -- mostly C-17s, their cargo bays crammed with hundreds of evacuees at a time. The airbase was ready with tents to house 10,000 people -- but they quickly filled up.

"We were maxed out and the flow kept coming. I had to close part of the base for Afghan evacuees," explains Olson. "Because you can't put them in the elements. It's 50 degrees [Fahrenheit] outside and raining. I can't put people out in that. Especially kids. So, that was one of the things that inflow and outflow. We were bringing them in faster than we could get them out. And that's hard."

As of Wednesday morning, almost 12,000 evacuees had left the airbase, while another 14,900 remained. The number of evacuees to have arrived at Ramstein so far is nearly triple the population of the German municipality that hosts the base.

Ramstein is also where 20 wounded US servicemembers and 10 injured Afghans were flown after a deadly terrorist attack outside Kabul airport last week, before being taken to a medical center five minutes from the base.

Andrew Landers, commander of the Landstuhl Regional Medical Centre (LRMC), told reporters Tuesday that they suffered a wide variety of injuries consistent with an explosion, including blast wounds, but also a number of gunshot wounds. Some of the injured required medical intervention onboard and mid-flight the C-17 flights which evacuated them from Kabul.

The 20 US servicemembers have now all been flown to the Walter Reed military medical center in the US. All were stable and conscious, most were speaking and in relatively good spirits, according to Landers.

Away from the service members, a total of 12 babies have now been born to Afghan evacuee families at the LRMC.

The last evacuation plane may have flown out of Kabul, but Ramstein air base still has a sprawling tent city that stretches across its flight line. Women and children sleep in cots inside the cavernous hangars of the airbase while the men sleep 40 to a tent. Hot meals are distributed three times a day in insulated boxes. Portable toilets and washing stations provide only the most basic sanitation.

Beyond providing basic shelter, Olson is coming up against new problems all the time. What to do, for example, with all the children. With so many families, the base now has more than 6,000 children.

The US State Department has also identified dozens as unaccompanied minors -- some separated from their parents and family in the chaos of evacuation. Olson took CNN to one of the few grassy patches on the base to see the "Kinder Pod," complete with footballs and a play area.

"One of our biggest issues has been baby wipes and formula," he said, adding that plane crews reported running out of diapers on evacuation flights to Ramstein Air Base. "Who would have thought that?"

The hardest part for most evacuees is the wait, uncertainty and inability to communicate with family members back home.

Donia Laali is one of those waiting. She fought her way into Kabul airport and pulled her family to safety, all seven of them women.

"We just decided to try, my family tried. Because we are all women. There are no men with us. My two brothers are still in the US. So, we are going to try and reach them," Laali tells CNN.

Sitting with other women just outside of an airplane hangar with a sea of military cots inside, Laali says that her seven family members were spread out across three different sections of the camp, unable to communicate with each other.

"Sometimes, it feels not that fair for us," Laali said, describing her frustration at the camp conditions. "But when I realize that I am safe here, from the Taliban, I'm okay. When I feel safe here, it means everything for me."

The aim was to get evacuees transferred out within 48 hours and, according to the US agreement with Germany, evacuees cannot stay beyond 10 days.

The screening and processing of evacuees is taking longer than anticipated, however.

On Saturday, Elizabeth Horst, US Minister Counselor for Public Diplomacy and the Senior Civilian Interagency Coordinator, appealed for patience.

"We are doing our best to help the people who worked with us in Afghanistan. We are using everything in our power," she said in a press briefing. "We have a personal and professional interest [in] making sure that the Afghans that come get out, get medical care and get to the US where they can start fresh. And become Americans if they choose too."

Ramstein's enormous Hangar 5 has been transformed into a makeshift international air terminal, complete with security screening and check-in. Evacuees are guided through by a combination of military and consular officers.

Passengers get yellow wristbands at check-in and then get their luggage weighed. Whole lives, packed into backpacks, cloth bundles or flimsy plastic bags, are carefully weighed on a scale and tagged. One volunteer group gives children colorful backpacks filled with toys and coloring books for the flight.

Even here, as evacuees wait to board their flights to the US, there is a mix of emotions.

As he waited to check-in, 25-year-old Asadullah Sadiqi showed us a bruise on his face, the remains of a black eye he said was given to him by Taliban soldiers at Kabul airport.

"The Taliban beat me up," Sadiqi told CNN, describing the scene at the airport. "Everyone was showing US passport or British passport. They didn't care. They were just beating people."

After more than two days of waiting in Ramstein, his family was finally cleared to go.

"Everybody is happy," he said as he held the hand of his nephew. "Because we are going to finally see our family in Virginia."

Meanwhile, 24-year-old Shabana Rangin sat on the floor with her husband Abdul. In her arms, she held a tiny bundle: Her 25-day-old baby boy.

"My brothers and sisters are there in Afghanistan. That's why I cry," she told CNN as she waited to get on her flight. She lifted a blanket to show her son's sleeping face. "I don't want to think about this for him in the future, to talk to him. This is not a good memory, not a happy memory."

Even for those who do board their flights, there are still delays. Last week CNN met 32-year-old Mohammad Nirwaz Maiwand, who showed us a carefully sealed plastic bag carrying his ID with the US Drug Enforcement Agency (DEA), for whom he had worked in Afghanistan.

Despite having an approved Special Immigrant Visa, he waited more than five days to get on a flight to the US, only to be shuffled to another tent camp to spend the night for further screening.

"All I can say is that the management of all this is very basic and very weak," he told CNN in a text message after landing at Dulles Airport.

On Ramstein Air Base, Olson is also clearly frustrated at the slow pace of entry for his new "family."

"Think of our parents and grandparents that got on a boat and went to America. All the things that they sacrificed. We've forgotten that in a lot of ways," he says. "Also we forget the sacrifices for the last 20 years that the military has borne for a lot of these new Afghan-Americans' freedom."

Before we leave, Olson drives CNN around to the donation stations where an army of civilian volunteers sorts through a mountain of shoes, jackets and blankets donated by the wider community. There's so much that the base has had trouble storing it all.

Despite the long waits, the fenced-in enclosures, he sees an attempt by the whole airbase community to reach out and comfort the new arrivals after so much heartbreak and loss.

"To me, the amazing story is this outpouring of support. These are people who want to do the right thing," Olson says.