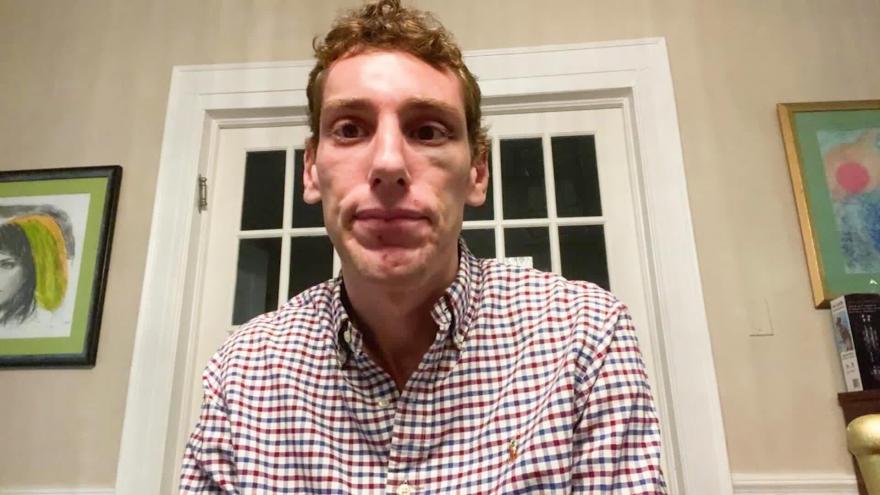 The Jewish man who was the victim of a gang assault in New York says the level of hatred was troubling.

(CNN) -- A 29-year-old Jewish man, who was attacked in a New York City gang assault said Friday that he could not understand why there was so much hate directed at him.

Joseph Borgen told CNN's Don Lemon he doesn't want revenge on the crowd that punched, kicked and pepper-sprayed him while shouting anti-Semitic slurs on Thursday night, but he wondered about the level of hatred.

"My main takeaway would be to understand where they are coming from because I don't get it, to be honest. Nothing in my life has ever made me want to do that to anybody."

A 23-year-old suspect, Waseem Awawdeh, has been arrested, the NYPD said. Awawdeh was arraigned in criminal court Saturday, according to a statement from Manhattan District Attorney Cyrus R. Vance, Jr.'s office, and has been charged with assault in the second degree as a hate crime and attempted gang assault in the first degree.

Awawdeh is seen on surveillance video allegedly using a metal crutch to strike Borgen, who tried to shield himself from the attack, according to a criminal complaint. CNN was not able to immediately identify an attorney for Awawdeh.

Borgen was just one of several Jewish people attacked in cities across the US this week as tensions flared over the Israeli-Palestinian conflict after days of violence between Israel and Hamas militants in Gaza that have left hundreds of people dead.

In a separate interview with CNN affiliate WABC, Borgen emphasized that he is concerned that there is a larger issue with hate against minorities in the city.

"I have coworkers of Asian ethnicity who are afraid to go on the subway at night because you know, they are afraid they are going to get attacked on the subway," Borgen said. "The amount of hate that is taking place these days is just mind-boggling to me. I mean, that shouldn't happen to anyone in New York City. I'm blown away, this is just shocking to me."

Borgen told CNN he was on his way to a rally Thursday, similar to one he had attended peacefully the week before. He exited the subway wearing his kippah or yarmulke, a Jewish head covering, and texted his friends that he was on his way when he noticed someone on the street chasing him, he told Lemon.

"Before I can even react, I was surrounded by a crowd of people who, as you saw in the video, proceeded to beat me down and then, after the fact, pepper spray and mace me," he said.

Borgen said he fell to the ground, trying to protect his head and face and hoping he would survive. Before that day, Borgen said he had never thought twice about wearing his kippah or identifying himself as a Jewish person.

Although video of the incident shows several people attacking him, it also shows some people coming to his aid. Borgen told Lemon he hopes those who stood up for him reach out so he can thank them personally.

The NYPD showed up pretty quickly, Borgen said, adding that later at the hospital, he met with senior members of the NYPD Hate Crime Task Force. They seemed intent on finding everybody who was involved and Borgen added he was thankful for that.

At least 26 were arrested Thursday night as pro-Israeli and pro-Palestinian protestors clashed in different parts of the city, police said.

While police said it is unclear if the individuals involved in the assault in New York were part of the protests in Times Square, New York Gov. Andrew Cuomo described Borgen as having been assaulted by protesters.

"I unequivocally condemn these brutal attacks on visibly Jewish New Yorkers and we will not tolerate anti-Semitic violent gang harassment and intimidation," the governor said Friday. "Those of all faiths, backgrounds and ethnicities must be able to walk the streets safely and free from harassment and violence."

When asked about the incidents, a spokesman for the nation's largest Muslim civil rights group, the Council on American-Islamic Relations (CAIR), said the group condemned anyone who engaged in hate speech, intimidation and violence.

"We encourage people to express their views to participate in rallies for whatever cause they believe in but no one has the right to engage in violence, hate speech or intimidation," said Ibrahim Hooper, a CAIR spokesman.

"We understand that passions are high but that's not an excuse for inappropriate behavior," he added.

The Anti-Defamation League (ADL) said on Thursday that "it has received more reports of possible anti-Semitic incidents since the conflict broke out in Israel, with 193 reports in the week after the crisis began, up from 131 the previous week."