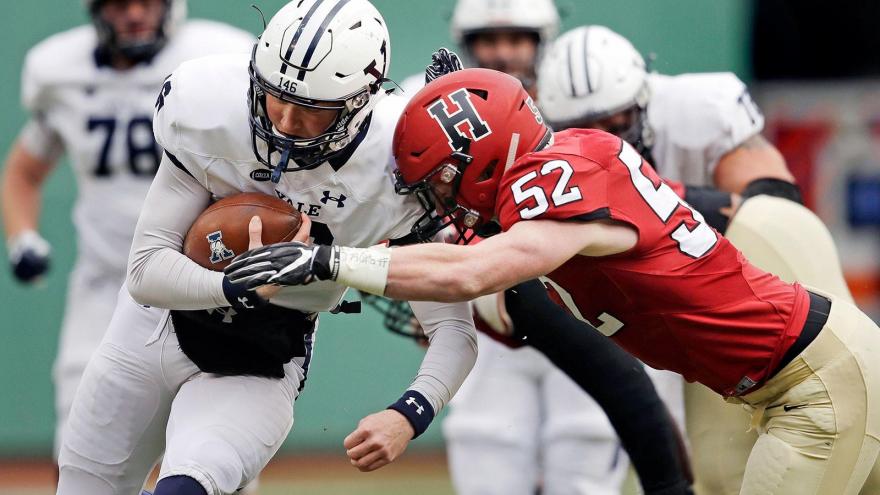 The Ivy League Council of Presidents said Wednesday that all fall sports, including football, will not be played at its colleges, to include Harvard, Princeton and Yale.

(CNN) -- Don't expect Ivy League sports this fall due to the ongoing coronavirus pandemic. The Ivy League Council of Presidents said Wednesday that all fall sports, including football, will not be played at its colleges, to include Harvard, Princeton and Yale.

"With the information available to us today regarding the continued spread of the virus, we simply do not believe we can create and maintain an environment for intercollegiate athletic competition that meets our requirements for safety and acceptable levels of risk, consistent with the policies that each of our schools is adopting as part of its reopening plans this fall," the Ivy League Council said in a statement.

The announcement makes the Ivy League the first Division I conference to drop out of the upcoming college football season. A number of other schools in lower divisions have already dropped out, such as the entire Division III Centennial Conference, which includes Johns Hopkins, McDaniel and other schools in Pennsylvania and Maryland.

A decision on the future of winter or spring sports and whether fall sports could be played in the spring of 2021 will be "determined at a later date," the Ivy League said in a news release.

The league, which consists of eight private universities, including Harvard, Princeton, Yale and the University of Pennsylvania, added that student-athletes will be able to train as long as they are following school and state regulations.

The move by the Ivy League to hold off on its fall sports could hint at other major conferences following suit. Last March, the Ivy League was the first conference to cancel its basketball tournaments for its women and men athletes. Other leagues followed, with all of March Madness eventually being canceled.

As coronavirus cases surge across the US, several universities have reported positive cases within their athletic programs as student-athletes returned to campus.

At Clemson University, the athletics department reported 28 positive tests, with 23 of those tests coming from football players, according to a Clemson spokesman.

At the University of Texas, 13 football players tested positive or were "presumed positive" for Covid-19.