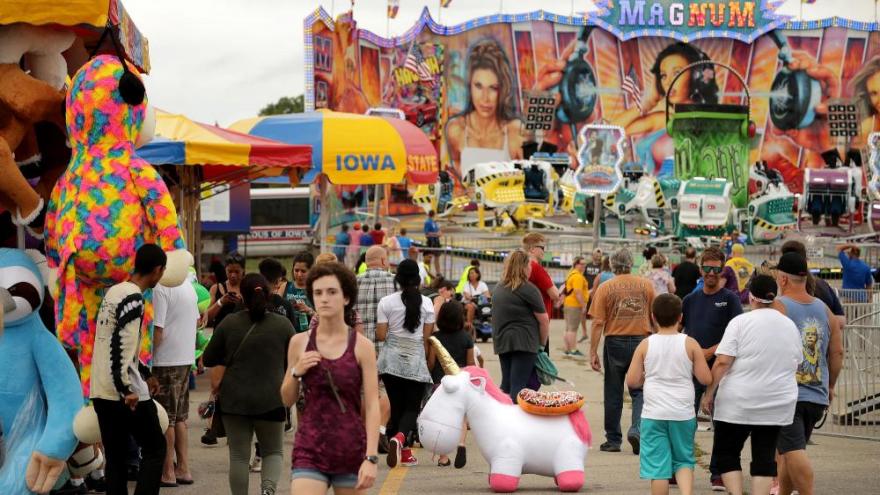 A plush unicorn prize sits in the middle of the Midway at the Iowa State Fair, August 2019 in Des Moines, Iowa. The fair has been postponed for the first time since World War II over coronavirus concerns.

(CNN) -- There will be no butter cows, outlandish fried foods on sticks or eager-to-please politicians in Des Moines, Iowa, this August.

The renowned Iowa State Fair, a campaign must-stop for presidential hopefuls, won't go on this year due to the coronavirus pandemic, its organizers announced. It'll be the first summer in 75 years without a fair.

The fair joins other highly anticipated events -- Comic-Con, the Coachella festival and the Tokyo Olympics -- that have all been postponed due to the virus, which is surging again in at least 19 states. At least 2 million people in the US have been infected.

The Iowa State Fair is one of the best-known informal arenas in politics, located smack dab in the American heartland.

It's tradition for candidates vying for their party's nomination to swing by the fair and try to charm voters months ahead of the Iowa caucuses. They get a turn on the soapbox, a microphone and 20 minutes to speak to fairgoers (who, on occasion, heckle them). At the fair, they roll up their sleeves and chow down on foods they didn't know could be fried.

The Iowa State Fair features carnival games, at least two pageants (one is traditional with tiaras and gowns; the other is for Iowan cowgirls), livestock shows and a true-to-size cow sculpture made entirely of butter.

Since its founding in 1854, only five Iowa State Fairs have ever been canceled: in 1898, because of the World's Fair in neighboring Omaha, Nebraska, and from 1942 to 1945, due to World War II, according to the Iowa State Fair website.