The hunger crisis linked to coronavirus could kill more people than the disease itself, Oxfam warns 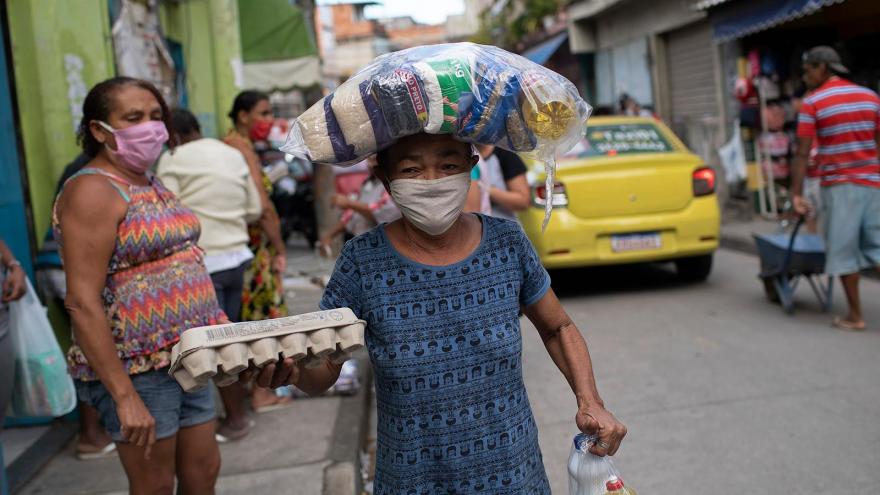 A woman delivering food in a favela in Rio de Janeiro, Brazil. People there are struggling even more due to the coronavirus pandemic, which is prompting a possible global food crisis.

(CNN) -- The coronavirus pandemic has already claimed over half a million lives across the world, with case numbers continuing to rise. A new report by Oxfam now warns that the hunger crisis worsened by the pandemic could potentially kill more people each day than the infection itself.

An estimated 12,000 people per day could die from hunger linked to Covid-19 by the end of the year, Oxfam said. By comparison, data by Johns Hopkins University shows that the pandemic's deadliest day so far was April 17, when 8,890 deaths were recorded.

"The pandemic is the final straw for millions of people already struggling with the impacts of conflict, climate change, inequality and a broken food system that has impoverished millions of food producers and workers," Oxfam's Interim Executive Director Chema Vera said in a release.

Among the issues that have left many unable to put food on the table are lost income caused by unemployment or a reduction in remittance payments, the lack of social support for those who work in the informal economy, and disruptions to the supply chain and hurdles faced by producers.

Also contributing to the crisis are the travel restrictions related to lockdowns, which impact not just workers and farmers, but also the delivery of humanitarian aid.

RELATED: The pandemic could cause long-term damage to how we get our food

In its briefing, Oxfam calls out food and beverage industry titans like Coca-Cola, Unilever, General Mills among others.

"Meanwhile, those at the top are continuing to make a profit: eight of the biggest food and drink companies paid out over $18 billion to shareholders since January even as the pandemic was spreading across the globe ? ten times more than the UN says is needed to stop people going hungry," the release reads.

According to Oxfam, the coronavirus pandemic "has added fuel to the fire of an already growing hunger crisis."

World Food Programme data cited by Oxfam estimates that in 2019, 821 million people were food insecure and 149 million of them suffered "crisis-level hunger or worse." Current projections say the number of people experiencing crisis-level hunger might reach 270 million in 2020 as a result of the coronavirus pandemic, an increase of over 80% from the previous year.

But the negative effects of the pandemic on food security are also felt in middle-income countries such as Brazil, India and South Africa, where "people that were just about managing have been tipped over the edge by the pandemic," according to Oxfam.

Brazil and India are now dealing with the second-largest and third-largest coronavirus outbreaks in the world, dwarfed only by that of the United States. Cases in Brazil have surpassed 1.7 million, and India has over 767,000. The United States broke the threshold of 3 million cases on Wednesday.

Food insecurity in the US and the pandemic

Hunger is rising globally, and the United States is no exception.

Over the last week, 1.3 million people filed initial claims for unemployment benefits, and according to Feeding America, an additional 17 million people in the United States could be food insecure in 2020 as a result of the pandemic. That would bring the total number of Americans struggling to put food on the table to around 54 million people, or one in six, the organization estimates.

"This is a 46% increase over the 37 million people who were food insecure prior to the COVID-19 crisis," based on data from 2018, said Emily Engelhard, a managing director at Feeding America.

Many more Americans are taking advantage of food banks across the country to get by, the organization says.

Based on preliminary data from Feeding America's latest food bank survey, 83% of the organization's food banks reported seeing an increase in the number of people served compared to this time last year, with an average increase of 50%, Engelhard explained.

"We need a more diversified supply chain system in which you have many more actors" to avoid these types of issues, Miguel Gómez, an associate professor at Cornell's School of Applied Economics, told CNN.

"There has to be a balance between having regional players and more global players. You don't want to depend on only one supply chain to feed a population, because that is risky," Gómez, an expert in supply chain sustainability, explained.

Gómez said he was not surprised by Oxfam's grim predictions, although he is optimistic that the worst case scenario they are anticipating can be avoided.

"It is clear that our food distribution system has huge inequalities," Gómez said. "A long term concern is how can we shift emphasis from just focusing on efficiencies and maximizing profits to a more resilient, fair food production and distribution system," he added.

Gómez believes that the solutions lie in global policy actions, like investing in food assistance programs, building or strengthening food safety networks, and supporting farmers as they see their revenues reduced.

RELATED: The pandemic has America's farmers on the brink. This could help us survive

More forceful government intervention to purchase and redistribute food, and measures to keep retail prices for basic needs from rising "at least in the short term" would also be impactful, Gómez argued.

"We should not forget about the importance of public policy or government in ensuring the availability of products at fair prices," said Gómez.

Oxfam's recommendations on how to solve the crisis at hand also point to the importance of governance and leadership at the global level.

"Governments can save lives now by fully funding the UN's COVID-19 appeal, making sure aid gets to those who need it most, and cancelling the debts of developing countries to free up funding for social protection and healthcare," Oxfam's Interim Executive Director Chema Vera is quoted as saying.

"To end this hunger crisis, governments must also build fairer, more robust, and more sustainable food systems, that put the interests of food producers and workers before the profits of big food and agribusiness," Vera added.