The Houston tiger was found with help from a local businesswoman 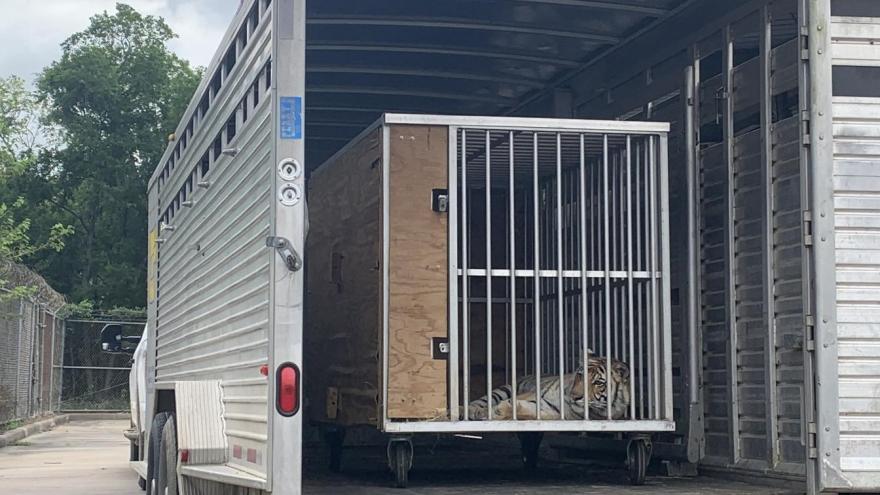 India, a tiger that was authorities tried to locate for almost a week, was returned to authorities on Saturday. On Sunday, the tiger was transferred to a sanctuary.

(CNN) -- A Houston businesswoman says she helped arrange for the return of India the tiger after being was contacted by investigators.

Linda McIngvale, the owner of "the resort-style athletic" Club Westside, says she became acquainted with Victor Hugo Cuevas and his wife, Gia Cuevas, when they visited the establishment as guests of a past member of the club.

After the tiger went missing, McIngvale says she was contacted by the animal enforcement manager at BARC, Houston's animal shelter, about helping with the safe return of the tiger.

With the help of Gia Cuevas, McIngvale says she arranged for the tiger to be handed over to BARC and the Houston Police Department (HPD) Saturday.

"We are happy that the cat is now safe and with a sanctuary and appreciate Cuevas' help in this matter," McIngvale wrote in an email to CNN.

While HPD did not name the location where the tiger was recovered, Cuevas' attorney said the transfer of the tiger occurred at a west Houston tennis club.

McIngvale says her club is licensed -- through the United States Department of Agriculture -- to exhibit exotic animals.

India, a 9-month-old Bengal tiger, was initially reported missing May 9 when the tiger was last seen with Victor Hugo Cuevas. He was out on bond on the murder charge in Fort Bend County and on a separate charge of evading arrest earlier this year in nearby Austin County.

Cuevas' attorney, Michael Elliott, said Saturday Cuevas and his wife have owned the tiger for nine months. It is illegal to house a tiger in Houston, according to Houston Police Commander Ron Borza.

Cuevas was arrested Monday for evading police in Harris County regarding the missing tiger and was released Wednesday on bond before the latest arrest Friday. He is currently in jail in Fort Bend County, Texas, with a $300,000 bond.