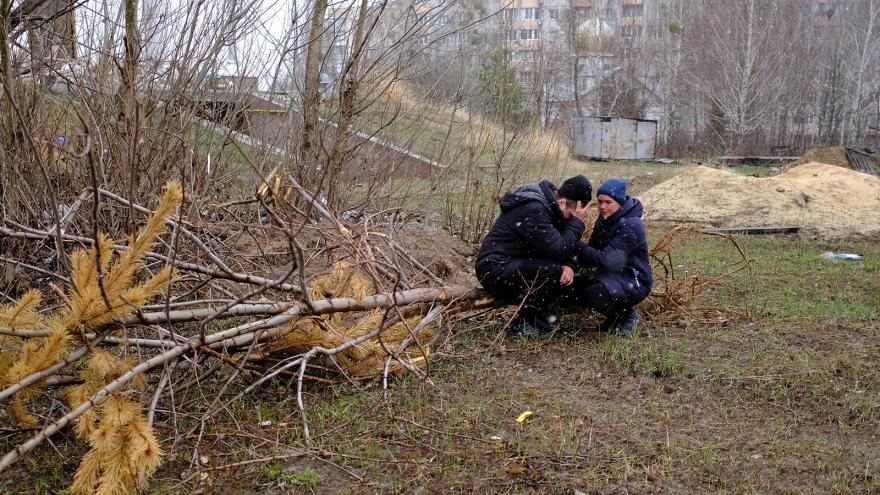 (CNN) -- Vladimir stands on the edge of a mass grave in the Ukrainian town of Bucha, on the outskirts of Kyiv. He holds his hands to his head, then raises them up to the sky in anguish.

"Brother, we've been looking for you for so long," he says, bursting into tears halfway through. His brother, Dmitry, has been missing for roughly a week and neighbors told Vladimir he might be buried here.

"We thought you were alive," Vladimir cries out.

Inside the grave, the bodies are piled on top of one another, mostly inside black bags but some with limbs protruding from the soil. Only some are interred. A CNN team saw at least a dozen bodies on the mass grave, but the earth shows signs of recent movement, suggesting many more could lie beneath.

Kyiv Regional Police and local residents say they believe at least 150 people were buried in the mass grave, but the mayor of Bucha says the death toll could be as high as 300. CNN could not independently verify their claims.

Vladimir gathers himself, comforted by his wife, Anna, and a neighbour, Liubov, and leaves. He says he believes his brother is buried there, but the sad reality is he cannot know for sure -- and might not for a very long timeas the town was only liberated from Russian forces over the weekend.

Residents say the grave, on the grounds behind the Church of St. Andrew and Pyervozvannoho All Saints, started being dug early in Russia's invasion of Ukraine, such was the death toll in this leafy suburb of Kyiv.

Satellite images from Maxar going back to March 10 show the trench already being dug.

As Russian forces retreat from the area around Kyiv, the horrors of Moscow's invasion of Ukraine are increasingly coming to light. The death and destruction brought by Russia's war machine are on full display in Bucha, once an up-and-coming area on Kyiv's outskirts for young couples looking for relatively new housing developments, large lawns and good schools.

But the invasion changed everything and artillery strikes have taken chunks out of Bucha's homes.

One tree-lined road in the town is now littered with the warped remnants of a Russian convoy that was ambushed by Ukrainian forces.

Most disturbingly, the Russian retreat has revealed at least 20 bodies lining a single street on Saturday.

Some had their hands tied behind their backs, others lay crumpled under their bicycles, in what officials have described as an execution by the Russian occupiers.

Ukrainian President Volodymyr Zelensky has blamed Russia for the killings and called on Moscow to put an end to the "war crimes."

"For these murders, for these tortures, for these arms torn off by explosions that lie on the streets. For shots in the back of the head of tied people. This is how the Russian state will now be perceived. This is your image," Zelensky said in a Sunday video address.

For its part, Russia has denied any involvement, maintaining it doesn't target civilians and saying the images of bodies on the streets of Bucha are fake.

Inside the district, the roads are littered with destroyed Russian armored vehicles -- including tanks -- ambushed by Ukrainian drones or units with NATO-supplied hand-held rocket launchers such as Javelins and Next-Generation Light Anti-Tank Weapons Systems, or NLAWs.

In some cases, entire columns of Russian armored vehicles were trapped on narrow residential roads before being destroyed.

"They thought they could just drive on the streets and go through. That they would be greeted as though it's alright to come here," Valery Spichek, an officer with the Ukrainian National Police, tells us. "Maybe they think it is normal to drive around looting, to destroy buildings and to mock people."

"But our people didn't allow it," he adds.

The vehicles are now rusting away where they stopped, evidence of the heavy losses Moscow suffered before being driven out of the area around Kyiv.

The destruction extends to most buildings and other infrastructure around, with very few houses left intact, a majority unlivable after Russia's offensive on the capital.

The scene in Bucha is similar to what CNN was able to see in other districts around Kyiv, such as Irpin, Myla, Hostomel and as far north as Bordyanka.

In the latter, entire multistory buildings were razed by artillery shells as Ukrainians and Russians battled for control of the area. Authorities say they fear dead bodies are lying underneath the rubble, and that the real death toll is still impossible to measure.

Konstantin Momotov, 69, chose to stay Bucha to look after his two dogs. "Troops with the letter V, that means 'east,' arrived here. There were a lot of them. They began to shoot with anti-aircraft guns to intimidate. It was on the third day of the war," he told CNN.

They killed his young neighbor, he said, but Momotov insisted that he was not afraid. "I'm already old (and) I have sent my children to Poland."

Despite the carnage, residents who survived the horrors are picking up their lives again. People attempted to do their grocery shopping on Sunday as the news of the alleged atrocities spread across the globe.

Western and Ukrainian officials are calling on the International Criminal Court to investigate the apparent killing of civilians in Bucha despite Russia's denials.

In the town itself, grief is turning into deafening anger. Looking to the sky, Vladimir's neighbor Liubov addresses Russia and President Vladimir Putin.

"Why do you hate us so much? Since the 1930s, you have been abusing Ukraine. You just wanted to destroy us, wanted us gone. But ... everything will be okay. I believe it," she said.