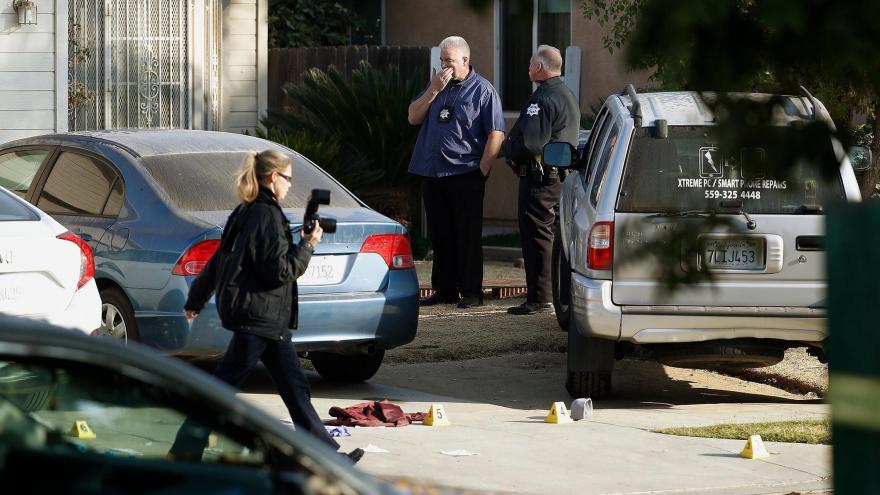 As people in football jerseys prepared to watch a game, police say two suspects came into the backyard on foot through an unlocked gate and opened fire. Witnesses described seeing only "flashes of light from the weapon," police said.

Now the community must plan funerals, prepare for the upcoming New Year and try to make sense of the tragedy as police work to identify who is responsible for the latest deadly shooting.

A community of refugees

The victims were all part of the Hmong community, a refugee group from Laos that aided the United States during the Vietnam War, rescuing downed pilots. Between 30,000-40,000 Hmong died fighting.

The United States promised to help the Hmong because of their loyalty during the war. The first wave of refugees landed in Minnesota in the 1970s and 1980s. Many were living in Thai refugee camps before coming to America after being forced to flee the jungles they lived in following the war.

The last major wave of Hmong refugees moved to Fresno around 20 years ago, according to Miguel Arias, a Fresno city council member who helped with the mass resettlement of the group during his time as a legislative assistant for the US House of Representatives.

Fresno is now home to the second largest Hmong community in the United States, with more than 30,000 people living within the city. Its population is second only to Minneapolis.

Arias says the community has really integrated into American culture. They recently reached several milestones, including opening a museum celebrating Hmong heritage and getting their first council member elected.

"All of those milestones have primarily been positive, their first school board member, doctor, pharmacist, mayor, all in the Central Valley. And now they have experienced a mass shooting."

Police believe the attack was targeted

Police are investigating the shooting, which occurred shortly before 8 p.m. Sunday. Arias describes the neighborhood as the "heart of the community," only blocks from the Hmong shopping center referred to by locals as "Asian Village."

"I had two of my officers that were covered in blood and actually had to be decontaminated, go shower and change their uniforms based on what they landed in and were trying to fix," said Capt. Anthony Martinez, southeast district commander for the Fresno police.

The shooting wasn't random, according to police. The shooters were targeting someone at the residence who had been "involved in a disturbance" earlier this week, Fresno Police Chief Andrew Hall told reporters Monday

"The Hmong community is a very peaceful community, we don't condone any type of violence whatsoever," Pao Yang told CNN over the phone Monday night. Yang is the CEO for The Fresno Center, a nonprofit in southeast Fresno. He's spoken to the elders who want to know why there's been a gang task force established by investigators. "Everybody's in shock," Yang explained.

The Hmong community in Fresno still runs in a traditionally tribal manner, with clans comprised of 28 different families that are identified by their last names, Yang explained. The elders of those clans have been consulted regarding the shooting, and Yang is working as a liaison between the police, elders, media and community at large.

He says elected officials have been especially supportive of the community as they try to navigate these new and terrifying waters.

Arias has also spoken with elders and Hmong leaders who are "still in shock" that they would face a tragedy of this magnitude in what is considered a safe community.

"The elders have experienced the worst trauma humanly known in the war that they went through. The elders were all soldiers. Some were soldiers when they were kids. They were generals, lieutenants colonels in the Laotian army," Arias explained. "For them, this kind of incident doesn't occur except in a battleground of war, not while you're watching the most American experience which is a Sunday football game at home with family."

The victims were performers

On Monday, police identified the victims as Xy Lee, 23, Phia Vang, 31, Kalaxang Thao, 40, and Kou Xiong, 38, who lived at the house where the shooting occurred. Lee, Vang and Thao were all residents of Fresno.

Lee was a well-known performer in the community and was scheduled to entertain during the Hmong New Year Festival that draws more than 100,000 people to the Fresno area each year, Yang said. A second performer is recovering from his injuries sustained during the shooting, according to Yang.

The loss to the community and the family is immense, Yang said. "[Lee was] so young and had so much ahead of him. For this heartless and pointless incident to happen, there's no words to describe."

Arias and Yang are both working to raise funds to help the families with funeral costs, which include paying off the debt of the deceased. Hmong cultural beliefs require that the person who passes away leaves earth debt-free. Part of the ceremony within the family is to determine who will pay off any outstanding debt, Arias explained.

The families will also pay to feed the community for the three-day long service. What makes the situation more complicated is that the Hmong are self-reliant and often won't ask for assistance with financial needs.

"We are trying as a community to payback and pay forward what they've given to us for several years," Arias said of his and the community's efforts.

They are hoping to raise around $100,000 for the Crimestoppers reward for information in the case.

He says they want to provide more incentive to those who may want to come forward but could need to relocate if they do so.

Arias says he has already gotten $5,000 commitments from at least 12 people to contribute to the reward for information in the case and plans to announce a GoFundMe and the increased reward money Wednesday.