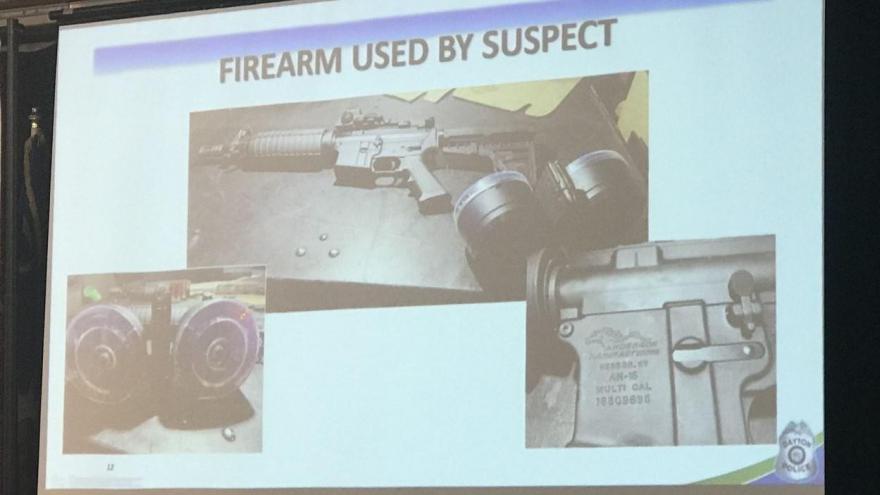 (CNN) -- One of the nine people killed in a mass shooting in a popular neighborhood in Dayton, Ohio, gave birth to a new child last month. Another recently celebrated his 30th birthday. A 25-year-old man joined colleagues Saturday night to celebrate their work as interns for a cancer treatment center.

The gunman's younger sister was also identified by police as one of the victims.

As police investigated and a city mourned the carnage Monday, the stories of those killed began to emerge. Relatives wept, remembering loved ones who they will never see again and calling for something to be done in America to stop the bloodshed.

"I'm lost for words right now. My family's lost for words," said Damon Davenport, who lost two cousins in the shooting. "All they were doing is enjoying a night out on the town, and they're dead. Never to come home again. Never to see their kids again. They're gone."

Gone is 27-year-old Lois Oglesby who, according to the Washington Post, gave birth to her second child last month.

"She was a nurse's aide and a very devoted mother," her uncle Joe Oglesby told the Post.

"He was very generous and loving and the world's best son," Danita Turner told the paper. "Everyone loved Logan. He was a happy-go-lucky guy."

Oglesby and Turner once attended Sinclair Community College. "We are deeply saddened by the horrific tragedy that struck our community this weekend," school president Steve Johnson said in a written statement. "We grieve for all those impacted by this senseless act of violence."

His employer said Turner was the "type of person you just love having work for you."

Greg Donson, president of Thaler Machine Co. in Springboro, Ohio, said he was a "fine young man," with a "big smile," and "great personality."

Donson said Logan worked at the ultraprecision machine shop and "loved his trade and had a great passion for it."

"He will be sorely missed."

Nicholas Cumer, 25, was in the Oregon District in Dayton to celebrate the end of his internship with Maple Tree Cancer Alliance. He was one week away from completing his internship at the cancer treatment center.

After the internship, he was to graduate from St. Francis University in Pennsylvania with a master's degree in exercise physiology.

The Maple Tree Cancer Alliance said it offered him a full-time job last week to run one of its new offices.

"Nick is remembered for his hard work and dedication to Maple Tree. He loved his patients and served them well, with a loving and caring spirit," the treatment center said in a statement. "He continuously went above and beyond our expectations and worked with a high level of excellence. He was well liked and respected by everyone on our team, and we all will miss him very much."

On his Twitter account, Cumer quoted a verse from the Bible's chapter of Romans: "Do not be conformed to the pattern of this world, but be transformed by the renewal of your mind."

"One of my main goals here is to get to know my patients to the level of calling them friends to make them feel welcome when they work with me," Cumer once wrote about his internship, according to St. Francis University.

Cumer was a member of the university's marching band. "The loss of Nick has left a hole in his family, our campus, our band family, and in each one of us who were fortunate enough to get to know him and call him our friend," said Dan Atwood, the band director.

The treatment center said two other employees were wounded in the attack but are expected to recover. The center asked for people to "take a moment today to appreciate the gifts this life has to offer. Be present. Smile at a stranger. Do a random act of kindness. Do not be overcome by evil, but overcome evil with good."

Thomas McNichols, a 25-year-old who went by T.J., was a father of four children ranging in age from 2 to 8. His family remembered him as a "gentle giant," always there for his kids.

"I will tell his kids that they had an amazing dad," said his aunt, Donna Johnson.

"We're just always going to honor his memory with love."

His cousin Jevin Lamar said, "He was an amazing brother and a great father, very kind. He was the gentle giant."

Derrick Fudge, 57, was out to have a fun night with family when he was fatally shot after stepping outside of a club to get some food, his family said.

Twyla Southall told WHIO that Fudge was a father and had a dog named Lucy that he "absolutely loved."

"He was a good man and loved his family," Southall said.

Beatrice N. Warren-Curtis, 36, and Monica E. Brickhouse, 39, were out together when they were gunned down. Tonya Amos wrote a powerful note on Facebook, remembering both women as "like two of my work daughters."

"I had the opportunity to manage and mentor them for some years. We sat beside each other everyday," Amos wrote. "We have laughed and cried together. Shared life stories and supported each other. These two ladies were very special to me. I'm sad and mad at this senseless loss. I cannot imagine how their families feel if I'm feeling this way."

Amos told CNN she worked with both women at health insurance giant Anthem. She met Warren-Curtis in 2012 and Brickhouse in 2014. "I looked at them as daughters," she said. "Monica was a mom and had a young son. I used to share parenting tips with her. Beatrice never had kids but was a good person. Outside of work, we had celebrations, birthdays, girls' night."

She said the three of them left their old department in 2016 and had not worked directly together since then, but had stayed in touch.

"They were my top performers. They helped train new associates and built a lot of positive relationships," she said. "They were bright and vibrant young ladies."

News of their deaths has left her shaken. "I woke up Sunday morning to text messages and I just couldn't believe it," Amos said. "I was devastated. My heart just broke for the two of them and their families."

Anthem said both women were associates who served on the company's research, recoveries and adjustments team. "We are deeply saddened by this tragedy," the insurer said. "Monica and Beatrice were not only co-workers, but dear friends, and valuable members of the Anthem team."

Saeed Saleh, 38, was identified by police as another of the fatal victims. Less was known about him, but the Dayton newspaper reported that he was originally from the east African country of Eritrea.

Police said one of the first victims in the shooting was the gunman's sister, 22-year-old Megan Betts. She was a student at Wright State University who hoped to graduate in 2020 with a degree in earth and environmental sciences.

Megan Betts had recently interned at the Smokejumper Visitor Center in Missoula County, Montana, the "largest smokejumper base in the country."

She was responsible for daily public tours at the center during her six-week internship, said Dan Hottle with the US Forest Service.

Her brother, Connor Betts, 24, was killed by police less than 30 seconds after he opened fire. Police did not detail the Betts siblings' relationship. But police said the two arrived together with a companion but separated at some point.

The companion suffered a gunshot wound to the lower torso and is still being treated at the hospital, Dayton Police Chief Richard Biehl told reporters. The police chief said there is "more conversation needed" with the companion to understand more of what the relationships were.