The Great American Car Shortage won't be over for months 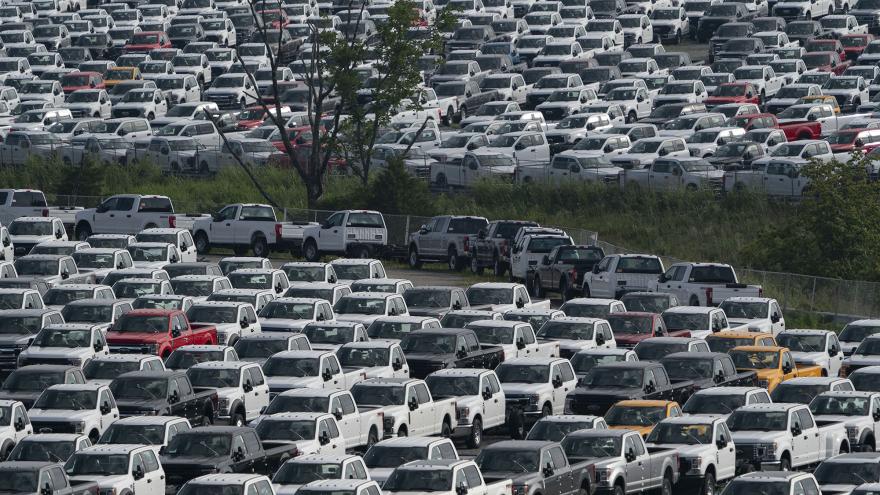 (CNN) -- New car inventories, strained for months by a global semiconductor shortage and supply chain disruptions, aren't expected to begin recovering until September -— and will remain well below their pre-pandemic levels through next year, according to Goldman Sachs.

Automakers in recent weeks have sharply revised down their production schedules as they struggle to work around the shortage of computer chips, which control dozens of functions in all modern vehicles. In a report released Wednesday, Goldman Sachs said it expects new car inventories to fall further in August, to around 1 million, before beginning to steadily rebuild in September. Inventories will remain well below their pre-pandemic levels through 2022.

Earlier this month, General Motors said it would stop making most of its full-size pickup trucks for a week due to semiconductor supply constraints.

Other automakers have had similar setbacks. Both Honda and Toyota shut down production at plants in Asia because of chip shortages. Ford announced in June 2021 that it is idling production at eight plants, including six in the US, through early August.

Tightening supply and surging demand have pushed car prices, new and used, through the roof.

Prices rose 5.3% over the last year, hitting record levels. According to Edmunds, a go-to resource for car information, the average price for a new car is now $41,000.

The Goldman Sachs report says new car prices will likely continue to rise over the next few months, peaking around 6% above their pre-pandemic level toward the end of the year. However, prices are expected to retrace about 30% of their pandemic-era increase by the end of 2022.

A shortage of new cars has pushed consumers toward used cars over the past few months, creating a scorching hot used car market.

The demand for used cars was so strong that some people were selling used cars for more than they bought them for, and cars with more than 100,000 miles were gaining value.

But there are signs the used car rush is slowing. Used car inventories seem to have bottomed in April and prices probably peaked in June 2021, according to the Goldman Sachs report. Prices will likely retrace about 35% of their growth since the start of the pandemic by the end of this year and over 70% by the end of 2022.

Other reports have shown similar trends in the used car market. Wholesale used car prices, the price dealers pay for the cars they sell to customers, fell in the first two weeks of July while inventories increased, according to Cox Automotive.

A separate Cox Automotive report showed that the retail price of used cars, the price customers pay, has increased, but at a slower pace over the past month.