The Glass Fire in California burned 1 acre every five seconds as it doubled in size, officials say 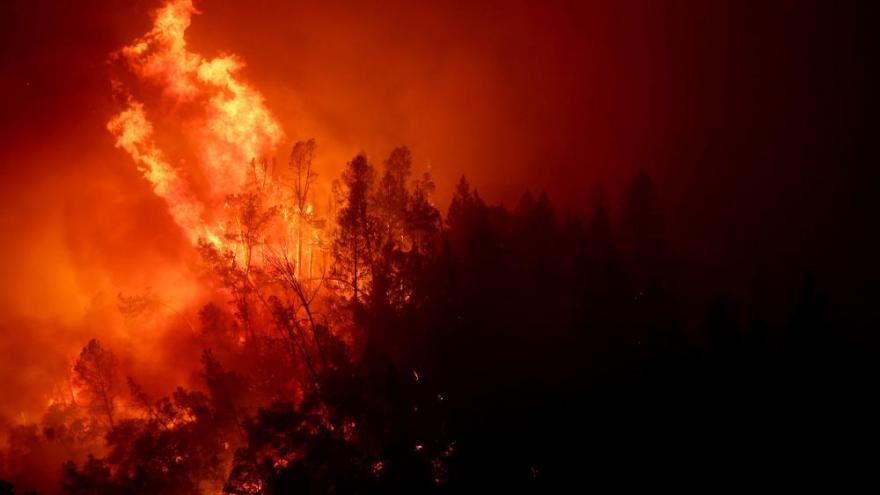 The fast moving Glass fire has burned more than 2,500 acres and prompted evacuations.

(CNN) -- Thousands of residents have been forced to flee their Northern California homes in recent days as the fast-moving Glass Fire continues to grow.

The fire has tripled in size since it began Sunday, burning 36,236 acres and having 0% containment, Cal Fire Division Chief Ben Nichols said at a Monday evening press conference. The Glass Fire sparked in Napa Valley early Sunday morning around 4 a.m. PT, growing at a rate of around 1 acre every five seconds between Sunday night and Monday morning, according to satellite images from the National Oceanic and Atmospheric Administration.

More than 70,000 people have been ordered to evacuate in Sonoma and Napa counties. At least 21 people have been treated at hospitals for burns, according to local hospitals in the area. A red flag warning remains in effect for the region until 9 pm local time Monday.

Flames tore through vineyards and structures near St. Helena, roaring over hills and jumping across both the Silverado Trail and the Lodi River, despite fire crews efforts to contain it, according to CNN affiliate KPIX.

While a number of structures have been damaged and destroyed by the Glass Fire, an exact figure was not yet available Monday evening. More than 8,500 structures were threatened across Sonoma, Lake, and Napa counties, according to a press release from Cal Fire.

Three people have died as a result of a fast-moving Zogg Fire in Shasta County that has quickly grown to 15,000 acres, Shasta County Sheriff-Coroner Eric Magrini announced in a press conference on Monday.

Gov. Gavin Newsom said he would commit more money for suppression and prevention of wildfires. There is a historic amount of money in the current budget, Newsom said.

Details of Newsom's plan are expected in the coming weeks, but the governor said they will include predictive fire analysis that allows for pre-positioning firefighting equipment and teams based on weather patterns, infrared technology, more cameras and new equipment for both air suppression and traditional ground firefighting.

"There's a lot of progress. We are not just standing still," Newsom said in a press conference Monday. "We're not just victims of fate. We want to shape this future. We want to work on suppression and work on prevention and then work on adaptation strategies that are longer term as it relates to decarbonizing our economy."

'It's becoming a lifestyle'

There have been more than 8,100 wildfires in the state this year and firefighters continue to fight at least 25 major blazes, Cal Fire said in a news release Sunday.

"Since August 15, when California's fire activity elevated, there have been 26 fatalities and over 7,000 structures destroyed," the release said.

Many have also been forced to leave Napa County, where thousands are under some form of evacuation notification, Napa County spokeswoman Janet Upton told CNN Sunday night.

Among those forced to evacuate the blaze was Jan Zakin, who lives in the evacuation zone on North Crystal Springs Road, CNN affiliate KGO reported.

"We woke up in the middle of the night and saw flames," Zakin told KGO. "I was in my underwear. There was a car on fire blocking access out. My dog ran away; I still haven't found her. We left with nothing, just literally with nothing. We're so lucky to be alive."

Magaly Otero, who was forced to evacuate due to the LNU Complex fire weeks ago, told KGO that the fires and evacuations are becoming an unwelcome part of life.

"It gets tiring, it's becoming a lifestyle," Otero told the affiliate. "It's a beautiful place but it's not right."

"We activated the high-low siren on our vehicles because we knew we needed to get people out of there quickly," Wofford said.

"When they hear that high-low siren coming from cars as we drove through their neighborhoods they know it's time to evacuate," he said. "The motto is, 'if I can hear it, it's time to go.'"

St. Helena Hospital, located in the foothills, also had to evacuate for the second time this summer due to fire risk, Upton told CNN.

The Zogg Fire, which was sparked on Sunday, is burning about 150 miles north of Sacramento near the city of Redding.

Approximately 466 homes have been evacuated in Shasta County due to the Zogg Fire, according to Sheriff-Coroner Magrini.

The fire remains 0% contained, according to Cal Fire.

Firefighters have been battling the August Complex Fire in several neighboring counties for more than a month. That fire has burned more than 870,000 acres since being sparked by lightning in August.

Multiple roads have been closed as fire operations continue throughout the region.

The National Weather Service has put much of California under a Red Flag Warning through Monday. In Butte County, town of Paradise was bracing for the worst as the North Complex Fire burns nearby, but the town appears to be in the clear for now.

Cal Fire official Shane Lauderdale said Monday that they are "very, very happy" because "fire activity was minimal" in that area and "everything stayed within the control lines" through the latest wind event.

The more than 3 million acres burned in wildfires this year in California is 26 times higher than the acres burned in 2019 for the same time period, according to Cal Fire.

In Southern California, the NWS tweeted, "Due to hot temperatures, dry conditions, and gusty Santa Ana winds, a Red Flag Warning will be in effect on Monday for the LA/Ventura mountains and Santa Clarita Valley. There will be the potential for rapid fire growth and extreme fire behavior, so be alert."

Concerns about high winds and continued dry conditions have led PG&E to shut off power in some areas in an effort to prevent more wildfires, which can be sparked by electrical equipment.

On Sunday, the utility said the planned shutoffs in northern California had decreased from 100,000 to 65,000 because of "favorable changes in forecast weather conditions."

Napa County, where the Glass Fire is burning is on the list of counties expected to experience shutoffs.

"Once the high winds subside Monday morning, PG&E will inspect the de-energized lines to ensure they were not damaged during the wind event, and then restore power," according to the release. "PG&E will safely restore power in stages as quickly as possible, with the goal of restoring power to nearly all customers who are safe to restore within 12 daylight hours after severe weather has passed."