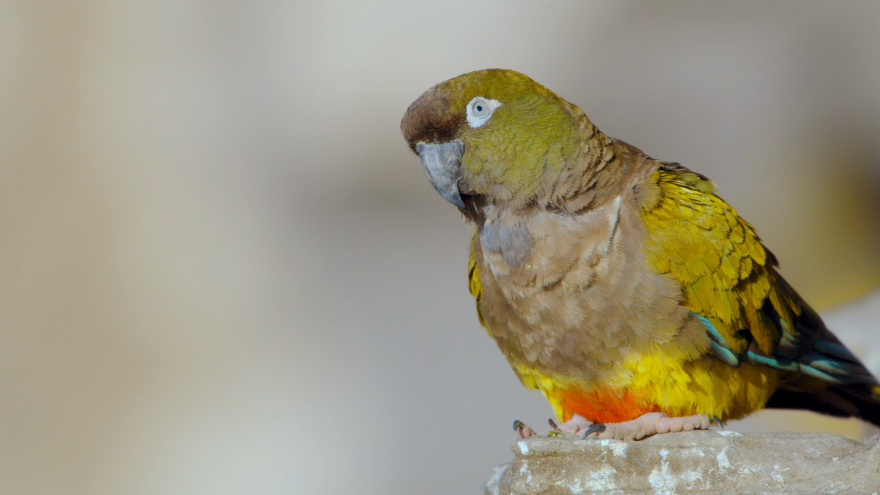 (CNN) -- Let's venture to one of the few wild places left on the planet.

An incredible diversity of species lives across the extremes of Patagonia -- and we're going to see them in a stunning new way.

The CNN Original Series "Patagonia: Life on the Edge of the World" premieres at9 p.m. ET Sunday and provides a look at the animals and plants found throughout the pristine southern tip of South America.

For more than a year, crews captured footage, revealing species new to science and filming elusive animals for the first time.

The six episodes explore the region's oceans, deserts, glaciers, jungles, mountains and ice fields, and the surprising creatures who have made their homein one of the remotest places on Earth.

The many wonders of Patagonia, however, are not immune from pollution or human encroachment, and the series reflects on how the choices we make are starting to impact this fragile, distant wilderness.

Patagonia is home to animals like the kodkod, or "the ghost of the forest," a diminutive wildcat so mysterious that most people have never even glimpsed it, and the huemul, a South Andean deer that is one of the rarest mammals on the planet.

Beneath the ocean surface, cold-water corals build colonies that support a host of other species, and incredibly clever pods of orcas hunt for prey, each led by a wise grandmother matriarch.

Critically endangered hooded grebes, striking black-and-white water birds, do a mating dance that looks like the tango. And the monito del monte is a tiny marsupial that slows its breathing rate during hibernation in an astonishing way -- which could reveal insights about human metabolism.

Explore many of Patagonia's elusive species in our photo gallery.

What short arms you have, Meraxes gigas.

Paleontologists have uncovered a previously unknown species of dinosaur in Argentina's northern Patagonia region. The carnivore was 36 feet (11 meters) long and weighed more than 4 tons -- and it had disproportionately stubby arms similar to those of T. rex.

The Cretaceous era-predator used its ferocious head to do the hard work of hunting and ripping up prey.

Aspects of the discovered dino remain puzzling to researchers -- like why its small arms and chest muscles were so well developed if they weren't actually used for hunting.

At first glance, the skies over the northern tip of Patagonia's desert coast in Argentina seem to be full of dancing clouds. In reality, the formations are flocks of colorful, chatty parrots.

The burrowing parrots tunnel into the crumbling sandstone cliffs of El Cóndor, home of the largest parrot colony in the world.

The highly social birds mate for life and can be very affectionate with one another as they raise their chicks on the mountain, with an enviable view of the Atlantic Ocean.

Once, the burrowing parrot could be found across South America. But the iconic bird's population is declining as its food source disappears due to deforestation. Watch how this unique bird has carved out a life among the cliffs in the first episode of "Patagonia" on Sunday.

A giant water lily has been hiding in plain sight for 177 years -- and it's kind of hard to miss.

The leaves can reach nearly 10 feet wide (3 meters) when it grows in the wild and can support a weight of at least 176 pounds (80 kilograms). In other words, you could stand or sit on the sprawling leaves (and some have) if you really wanted to.

Marvel at the stunning pink and purple tones of a nebula observed in the Argentine night sky, a reflection of the northern lights in a Canadian lake and swirling clouds of gas on the sun.

These are just some of the cosmic highlights of the 2022 Astronomy Photographer of the Year contest.

Photographers from 67 countries shared their unusual and rare astronomical images for the competition, which is organized by the Royal Observatory in Greenwich, London.

The winning photos will be announced on September 15.

-- Earth's most powerful particle accelerator has fired up for the third time to unlock more secrets of the universe. The Large Hadron Collider will investigate the mysteries of dark matter, an invisible substance that doesn't absorb, reflect or emit any light.

-- Flying insects are rapidly declining in the United Kingdom, but a proposed network of wildflower meadows could provide nectar-rich stepping stones for the country's tiniest commuters.

-- The first five cosmic targets of the James Webb Space Telescope were shared by NASA on Friday, including an exoplanet, stars and faint, distant galaxies. We'll see the first Webb images Tuesday beginning at 10:30 a.m. ET and experience the awe together.