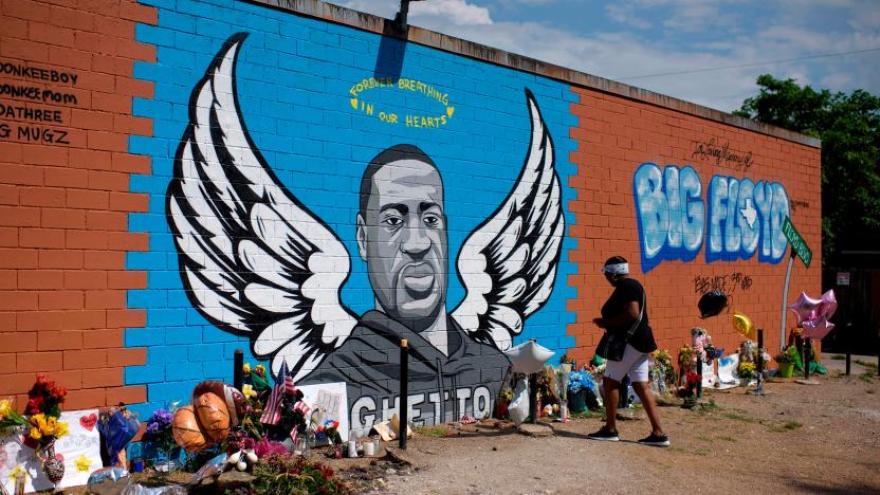 Visitors pay their respects to George Floyd in front of a mural in Houston, Texas. Texas A&M University-Commerce will begin an internship program in Floyd's name next January.

(CNN) -- The George Floyd Memorial Foundation has teamed up with Texas A&M University-Commerce to launch an internship program for Black male students, the school announced this week.

The Be His Legacy Internship Program will begin in January and is available to student members of the African American Male Mentorship Program at A&M-Commerce. According to a release from the school the school, AAMMP "encourages Black male students to actively engage in the university experience, develop leadership skills, and successfully graduate and become future industry leaders."

"Interns will work on cutting-edge projects with real-world relevance while receiving mentorship from some of the brightest minds in the fields of education, government, law and the non-profit sector," Bridgett Floyd, George Floyd's sister and president of his memorial foundation, said in the release.

Be His Legacy is a two-semester program. Members will be involved in hands-on experiences including community outreach, educational programs and reform initiatives, according to the school.

George Floyd's death, along with Breonna Taylor's and Ahmaud Arbery's, launched a wave of protests this year over systemic racism and police brutality.

Floyd, 46, grew up in Houston. He was killed in May when a member of the Minneapolis Police Department knelt on his neck during an arrest for allegedly using a counterfeit bill at a convenience store.