The futuristic yacht that's designed from the inside out 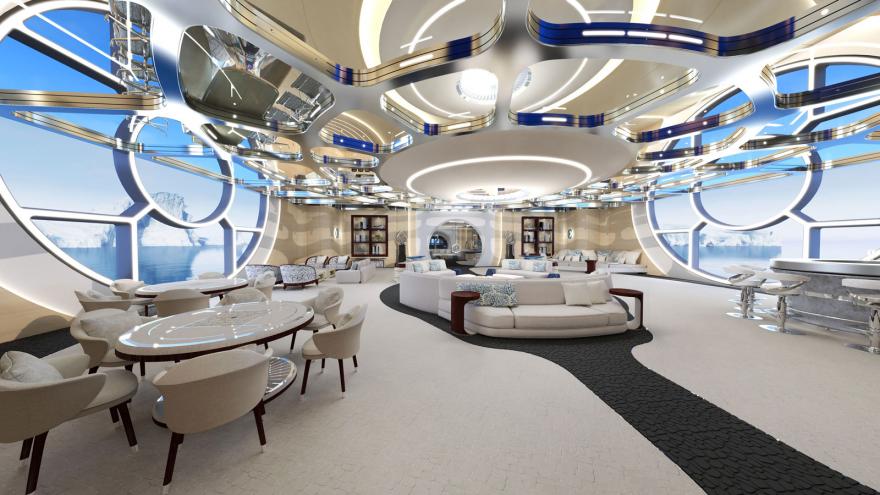 (CNN) -- Whether it's a luxury superyacht or a more modest vessel, yacht designs tend to be all about the exterior, while the interior can feel like something of an afterthought.

However, UK-based studio Gresham Yacht Design has turned this notion on its head completely with its latest mega yacht concept Thor Explore, which is designed from the inside out.

Measuring 100 meters, the exploration vessel's interior is as futuristic as it gets, with large nautilus windows, a floor to ceiling aquarium and a helideck with its own hangar.

Its main deck features a huge saloon with a glass floor -- supported by exposed structural beams -- that can transform to opaque "with the flick of a switch" should those on board require privacy.

A mission control center sits at the upper level, just above a sunken seating area that looks like it's floating in between the decks.

To get to the onboard beach club, "positioned high above the waterline," passengers must venture down a circular corridor, where they can check out the cylindrical aquarium.

It also holds a fully certified helideck, along with a hangar in which the aircraft can be held while not in use.

Renderings of the yacht's exterior are not available as yet, but the designers stress the internal spaces "directly inform the exterior styling."

While it's just a concept at present and a build cost hasn't been determined, Thor Explore is in the advanced stages of the design process according to the team at Gresham Yacht Design.

If the project were to be picked up by a shipyard and built from scratch, it could be constructed within three or four years "depending on the finish desired".

Converting an existing commercial vessel is also an option, but the design studio says creating the yacht from scratch would be the preferable choice.

Thor Explore is one of several new yacht concepts to be unveiled in recent months including Italian designer Pierpaolo Lazzarini's bullet-shaped hyper yacht concept Xenos and Baran Akalın and G. Jelle Bilkert's Escalade, the first vessel of its kind to feature a Trimonoran hull, which is a combination of a monohull and a trimaran hull.