The first coronavirus epicenter in the US gets the vaccine, but threat of the deadly virus lurks 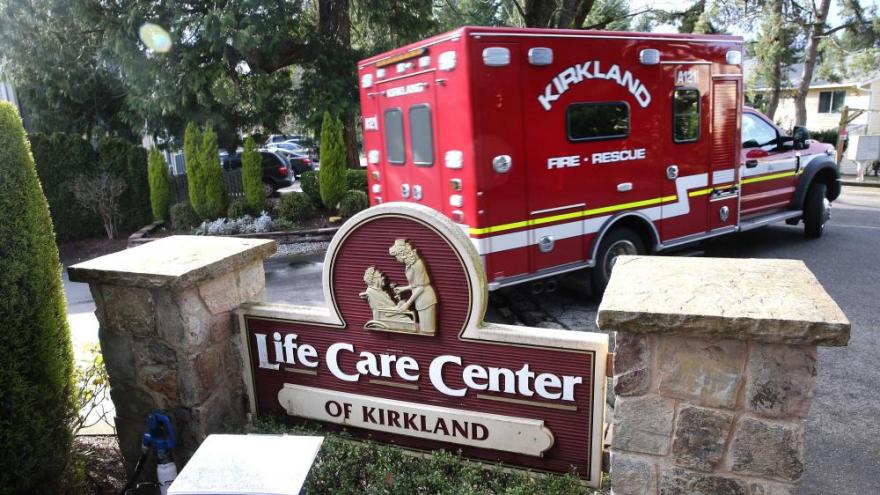 An ambulance leaves the Life Care Center on March 7, 2020, in Kirkland, Washington.

(CNN) -- In an instant, nursing director Chelsey Earnest can recall the worst day at work she has ever had. Sometimes it comes back without her trying to remember.

What happened March 4 before the dawn and into the night haunts her.

The sirens seemed to blare endlessly outside the Life Care Center in Kirkland, Washington.

"That was the night (we had) like five ambulances in the parking lot," she said.

It was the night she sent patients to the hospital whom she expected would be treated and eventually released. They never came back.

It was the date she figured out "the whole cascade of symptoms" of a virus the nursing home learned had invaded just four days earlier.

It was also the day she had to make some gut-wrenching phone calls.

One at 3 a.m. she can't shake from her mind. She remembers the conversation with the woman on the other end of the line.

"I realized this was early in the morning, and this is very difficult to say that I am really sorry that your mom has passed away," Earnest said. "I cried with her."

Earnest, a registered nurse, volunteered to help out the Kirkland nursing home from her position as a nursing director at another Life Care Center in the state.

They needed all the help they could get. Nearly 70% of the staff had tested positive for coronavirus in March.

She had no idea that the inconspicuous building on a tree-lined street in a quiet residential neighborhood in Kirkland would become America's first epicenter of the coronavirus outbreak.

Eventually the state department of health reported 46 people linked to the nursing home died of coronavirus; 39 of them were patients. Ten patients died at the nursing home itself, Earnest said.

"It was like chasing a ghost," she told CNN in March. "You're in a battlefield where supplies are limited. The help's slow to get to you and there's lots of casualties. And you can't see the enemy."

Ten months since the initial outbreak, she and other frontline health care workers here are finally getting the best weapon available to battle the virus: the vaccine.

Alice Cortez, a nursing manager at Life Care Center of Kirkland, was the first to get the vaccine here.

"This is an exciting day for everybody especially my team," she said as her voice cracked with emotion.

"What I feel right now is a new life, a new beginning, but a better life."

One by one, nurses, a doctor and other frontline workers at the facility came outside to get their first dose of the Pfizer-BioNTech vaccine. That vaccine was the first to get emergency approval by the FDA.

But everyone here is well aware that the virus is still raging and remains a threat to the most vulnerable people: The people they are charged with caring for.

For now, the Kirkland nursing home has no positive coronavirus cases. But of the 26 Life Care Center nursing homes in the region, eight facilities have Covid-19 cases right now. At one point this year, 24 of the 26 did.

As of December 13, the Center for Medicare and Medicaid Services, which oversees nursing homes, says 441,000 nursing home patients have tested positive for coronavirus across the United States and 86,775 nursing home residents have died from Covid-19. And 1,258 staff members have perished, too.

"There is not a day that goes by where I don't get a phone call or a message that we have a new positive patient or staff," said Nancy Butner, vice president of Life Care Centers of America Northwest division. Butner said some of her staff have been hospitalized recently. And more patients have died in other facilities.

"It is relentless," Butner said.

Initially, some families and the public blamed the nurses, doctors and staff at Life Care Center of Kirkland for the outbreak and not controlling it better.

The phones never stopped ringing. Families couldn't get through -- sometimes doctors couldn't -- because of other unwanted calls.

"It was very hard to go into a patient's room and hear the phone. And you think it's a doctor, and you get there and it's some person saying they have the cure for Covid giving you a recipe that is as crazier than they are," Earnst said.

Too often, it was the most jarring kind of call: death threats, enough to require security. Earnest was afraid to go to her car one night after treating patients.

"My husband said, 'Make sure you have your gun,'" she said, able to laugh about it now. But he was serious and so were the threats.

Then there was the sight of the devastated families who showed up every day.

Some had lost their mom or dad at the facility, and others had family still inside infected with Covid-19. They sat in chairs outside their family member's room window, eating lunch with them and having muffled conversations through the glass.

Inside, the staff was dealing with a virus no one knew enough about.

It was before the public was told to wear masks, before the elbow bump became the new handshake, before all of the symptoms were known. And it was before tens of thousands of people began getting sick and dying in New York City, which soon became the second epicenter of the virus.

In April, state and federal agencies that oversee nursing homes also blamed Life Care Center of Kirkland. The federal report said: "inspectors found three 'Immediate Jeopardy' situations, which are situations in which a patient's safety is placed in imminent danger."

Life Care Center appealed the ruling. In September, a state administrative judge largely sided with the Life Care Center of Kirkland, not the state findings, which mimicked the federal ones.

The judge said the state agency "provided relatively little evidence that the facility actually failed to meet any expected standard of care or failed to follow public health guidelines."

The federal appeal has not been decided.

Changes made since the March outbreak

In the beginning, there were not enough coronavirus tests, and it took days to get results. Now, they have rapid tests that take minutes.

In some rooms, there were three patients. Now, that's down to one -- or two if they can be properly distanced.

Before the virus, the facility accepted as many as 124 patients. Now they've capped it at 97.

Back then, there was a constant worry about a lack of personal protective equipment. Now, a nearby facility has a large room stuffed with boxes of masks, gloves and other gear.

But 10 months after the initial viral outbreak, the chairs for family members remain outside the windows of the rooms. Room numbers are scrawled on the windows.

That has become a semi-permanent fixture because visitors still aren't allowed inside.

There is no family hand-holding or hugs and kisses. It is simply too dangerous, the virus too contagious. The staff knows that now.

In the beginning, Earnest, a registered nurse, was informing doctors and members of the Centers for Disease Control and Prevention of what she was seeing in patients. Now, they get constant updates and new safety protocols from government agencies.

Covid-19 impacts staff inside and outside the nursing home

Butner says what people don't often think about is that the staff has to battle the virus at work and at home.

Earnest lost an uncle to Covid-19 this year. So before Christmas she had to have "the talk" with her mother about how she wanted to die.

It was the hardest conversation she's had with family. But she says she couldn't avoid it. No one should.

Earnest said she hopes the vaccine will make these conversations less urgent. But not everybody at the nursing facilities is looking forward to getting it.

"We did a survey with the staff at our facilities before we did education on the vaccine. Twenty percent said no, never. They would not get vaccinated," she said.

For now, she says, Life Care Centers of America isn't making it mandatory. The reason is simple.

"We simply could not lose 20% of our staff," she said. "Another effect of this virus is an extreme shortage of nursing staff for all of health care."

She is hoping that with education, the percentage will shrink.

For physician's assistant Christy Carmichael, her decision to get the vaccine made everyone gasp. Last week she had promised one of her patients who had survived Covid-19 that she would be able get the vaccine.

"I said sure you can. Unfortunately she passed away," Carmichael said, before dissolving into tears after getting her vaccine shot. "I did promise her that she would get it, so it's just sad that she didn't get to see this today."