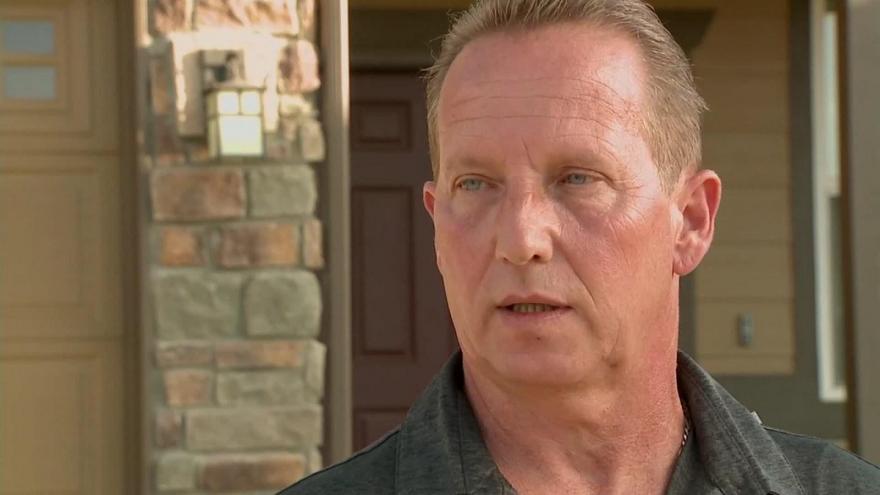 **Embargo: Denver, CO** Frank Rzucek, Shanann Watts' father, gave his statement outside the home where his daughter once lived

(CNN) -- The father of Shanann Watts, who was killed along with her two daughters by her husband is pleading with online bullies to stop the harassment his family has endured in the past year.

"Our family, including Shanann and her children and our grandchildren, have been ridiculed, demeaned, slandered, mocked in the most vicious ways you can imagine," Frank Rzucek said Monday outside the home in the Colorado suburb where his daughter lived. "We have been subject to false accusations, fake Facebook accounts, hate speeches and a constant stream of ugly, evil insults and attacks."

Watts' pregnant body and the bodies of her children, Bella, 4, and Celeste, 3, were found in August in a secluded oil field where Shanann's husband, Chris Watts worked. He later pleaded guilty to the killings, and is serving five life sentences -- three consecutive and two concurrent -- after Shanann's family agreed to drop the possibility of pursuing the death penalty.

"Every time we turn around there is someone trying to capitalize on our tragedy by spreading false rumors and outright lies about Shanann and our grandchildren," he said.

Rzucek said his family hasn't been given the "right to mourn in peace."

"It is cruel, it is heartless and it's flat wrong," he said.

Family: Social media platforms have done nothing to help

"We have been subject to threats on our lives all because we are victims of a painful tragedy," Rzucek said.

He said he wouldn't go into specifics about what exactly the online harassment looks like, but his family has made many attempts to contact the multiple social media platforms about the bullying. The companies have not responded, he said.

"We are calling on you again to do the right thing, to take some responsibility for your platforms and stop this despicable conduct," he said, addressing companies.

Lambert said a group of people have been helping the family track down the cyber bullies and are "constantly reporting" them. But nothing has been done to stop the harassment.

In a statement, a YouTube spokesperson told CNN, "Our hearts go out to the families who have suffered tragic losses due to violent events. We rigorously enforce our policies that prohibit harassment, including removing videos that target victims of violent events or their families and claim these events were 'hoaxes' or didn't happen, when flagged by our users."

"It is painful enough for just dealing with the reality. Reading the insane conspiracy theories, ugly false rumors and lies only make it more painful," Rzucek said.

The harassment is nonstop, he said, adding "we can't grieve."

"We don't deserve it," he said. "It boils my blood that my families and other families dealing with worse, unimaginable tragedy have to deal with this kind of cruelty and bullying."