The Ever Given is finally leaving the Suez Canal 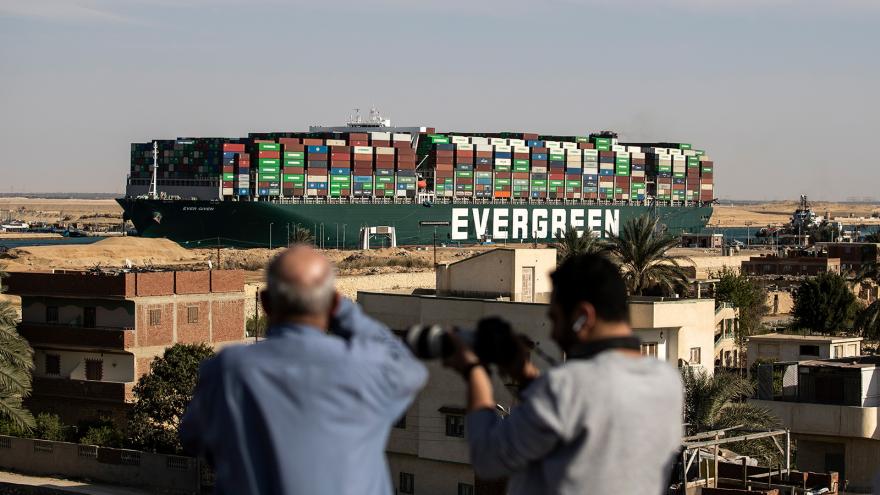 (CNN) -- The Ever Given has begun its journey out of the Suez Canal more than three months after it ran aground, clogging up one of the world's most vital trade arteries and disrupting global supply chains.

The quarter-mile long container ship, which blocked the Suez Canal for six days in March will now sail to Rotterdam in the Netherlands and then on to Felixstowe in England with hundreds of millions of dollars worth of cargo still on board.

The journey to Rotterdam could take about two weeks, as the vessel will likely have to sail at a slower pace than usual due to damage sustained from the incident, according to Jai Sharma, a partner at Clyde & Co. The law firm represents companies and insurers with over $100 million in cargo on the vessel and estimates the total value of goods on board to be over $600 million.

The Ever Given ran aground in the Suez Canal on March 23, heaping pressure on strained global supply chains as hundreds of other vessels became ensnared. The blockage exacerbated container shortages, port congestion and capacity constraints that have made it much more expensive to move goods around the world and caused shortages of everything from exercise bikes to cheese at a time of unprecedented demand.

The vessel was refloated on March 30 but has been held in the canal's Great Bitter Lake amid a legal battle between Japanese ship owner Shoei Kisen Kaisha and the Suez Canal Authority, which initially filed a $900 million compensation claim for losses arising from the six-day blockage.

The hold up has trapped goods belonging to companies such as IKEA and Lenovo and many smaller businesses on board. UK bicycle maker Pearson 1860 and Snuggy UK, which makes wearable blankets, have vital orders stuck on the vessel, which was carrying 18,300 containers.