The election has been decided. But America is still waiting -- like it has all year 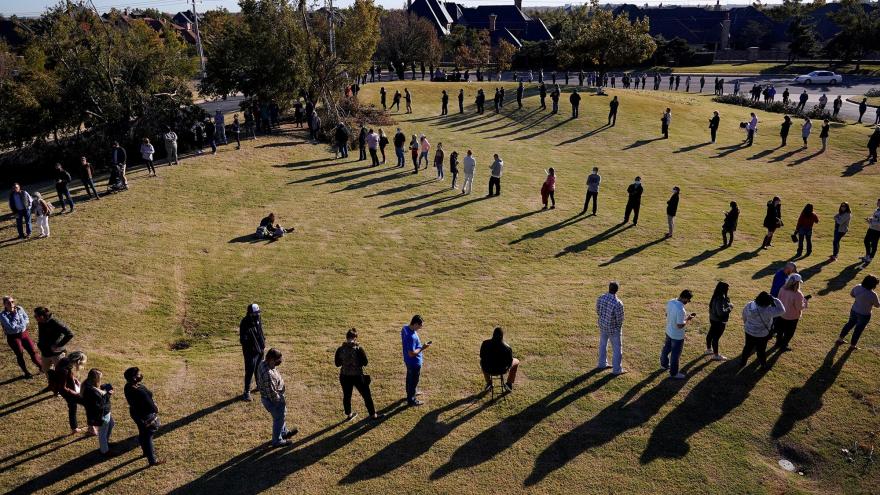 Voters wait in a long line to cast their ballots in Oklahoma City.

(CNN) -- After the 1876 US election, it took nearly four months for Rutherford B. Hayes to be named the next president, just three days before he was due to be inaugurated.

In 2000, Americans had to wait five weeks for George W. Bush to be declared the winner in a contest that came down to a few hundred votes in Florida.

On one hand, it's heartening to know that waiting -- and all of the anxiety and melodrama it brings -- has always been a part of the electoral process.

On the other hand, the pandemic and politics have left us in a state of suspended animation.

Waiting is all we've been doing this year.

Waiting for a vaccine.

Waiting to see loved ones.

Waiting for things to get better.

And now, even with Joe Biden chosen as the 46th US President after months of excruciating political rancor, it feels like the end still isn't in sight.

In Georgia, which appears to have flipped blue by the thinnest of margins, the race is so tight it will likely go to a requested recount. In Pennsylvania, election officials say it could take several days to complete a full tally of votes.

Even when a winner is unanimously declared, President Trump has made it clear he isn't going down without a fight. Several states are dealing with lawsuits filed by his campaign based on empty allegations of voter fraud. Trump himself has said he will not concede.

Meanwhile, the pandemic has swept over the nation with renewed force, possibly bringing more lockdowns, more uncertainty, and more worries that a return to normal is still terminally out of reach.

We have a penchant for instant gratification

There are two reasons this wait feels particularly painful.

One, we have a penchant for instant gratification.

It's clear in how we consume: About 126 million Americans have Amazon Prime memberships, all buying and receiving in neat 2-day increments. There are more than 195 million Netflix subscribers nationwide with access to more hours of entertainment than one person could physically watch in their lifetime.

If one has money to spend and means to acquire it, we're used to getting exactly what we want when we want it.

This immediacy is a cornerstone of our commerce and our life. It comes at a premium, leading to the illusion that money and power can make anything appear out of thin air.

But we're having to hold our breath

But money can't buy election results, and it can't buy our way out of any of the problems this year has visited upon us.

The world has thrown millions toward a solution to end the global pandemic that has all but frozen us in time.

But ultimately, a virus can't be cajoled, convinced or paid to go away, and it could take months before a viable solution even appears, let alone is put into play.

We were told, specifically, that we may not have an instant relief from the long months of political rancor that led us to the fulcrum of this presidential election.

And yet, we hold our breath until we're blue in the face.

Because we don't like waiting. Because we want it to be over. Because it feels like everything is happening all at once, and yet, nothing is.

We're no longer in control

Adjacent to our routines of instant gratification is the very American idea that we are architects of our own destiny.

"Part of the challenge right now is, we would like to control things and decide things on our terms," says Lynn Bufka, the American Psychological Association's senior director of practice transformation and quality.

"We're used to making decisions about how our lives function, when we do things, where we go. Relying on an external process can be hard"

Other than voting, wearing masks, and generally trying to embody ideals we believe in, there's not a lot the average person can do to stop a pandemic or accelerate the results of an election.

Our routines have been upended

On top of it all, when we have to wait for things, we are comforted by at least knowing when they will happen.

Numbers, calendar dates, holidays and work schedules order the movement of our lives, laying out the destinations ahead.

Baseball starts in April. We'll plan a trip this summer. School's in session. Election Day is in November. Church is on Sunday. We'll get together at Thanksgiving.

This inner sense of time has been so profoundly upended, it's not just the uncertainty surrounding key questions -- about presidencies, about financial futures, about our health -- that keeps us up at night.

It's the deeper anxiety of not even knowing when these moments will happen.

Time means nothing. Without these familiar frames of reference, without a feeling of control over the future, the act of waiting becomes an agonizing pursuit with no clear end.

But waiting can save us

But this waiting, this thing we do so poorly, could be the very thing that saves us.

After all, the very reason things like elections and medical breakthroughs take time is because they're too important to mess up.

In the days since the election, advocates of every political stripe have united behind a single message: Every legal vote must be counted.

"That's why we are still in the middle of election week in an instant gratification society that is unaccustomed to waiting for the process to work," writes CNN commentator John Avlon.

In the same vein, the development of a successful coronavirus vaccine requires care, scientific rigor, and vigilant oversight -- all things that can't and shouldn't be rushed.

And the reality is, even a successful vaccine isn't an immediate and universal fix. Health experts across the board have advised that we can't pin our hopes on a single fix.

"A vaccine not going to eliminate the need to be prudent and careful with our public health measures," said Dr. Anthony Fauci in September.

In these agonizing moments, we can see patience for what it really is: Not a state of passivity, but a practice in and of itself.

Instead of feeling helpless, we can encourage doing things the right way, not the fast way. We can protect the vote. We can keep each other safe.