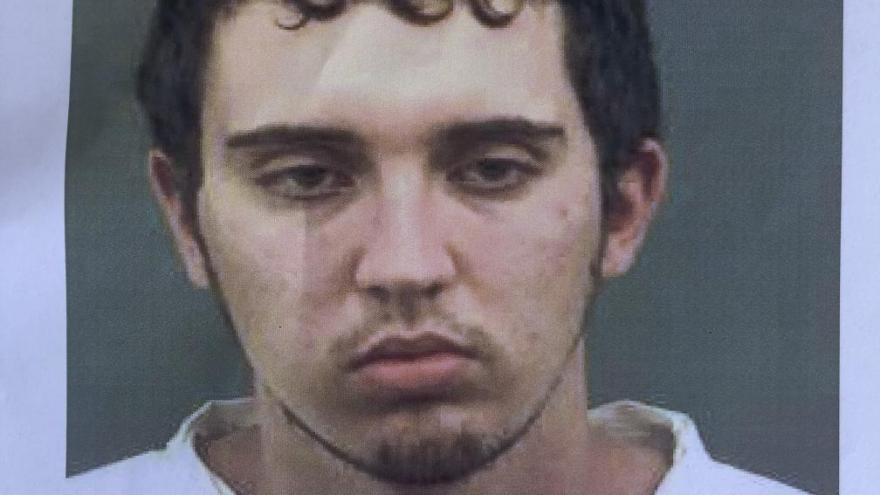 (CNN) -- The man who authorities say opened fire at a Walmart in El Paso, Texas, had a ''stone cold look'' when he surrendered, a police official who came face-to-face with him told CNN.

"It was a look I'd never seen before, and I've been on this force for 31 years," the official said. "I've seen murderers, robbers, nothing like this."

Patrick Crusius, 21, of Allen, Texas, has been charged with capital murder in the mass shooting that left 22 people dead and more than two dozen wounded, according to court records. He is being held without bond.

Crusius was arrested Saturday after he drove to an intersection just north of the store. Crusius got out of his car and surrendered to an El Paso motorcycle police officer, El Paso police Sgt. Enrique Carrillo said.

While surrendering, Crusius put his hands up and identified himself as the shooter, Carrillo said.

While in custody, Crusius has been "cold" in his interactions with police, police officials told CNN.

Police Chief Greg Allen told reporters Monday that Crusius has been cooperative, though he's shown no remorse and "appears to be in a state of shock and confusion."

Criminal defense attorney Mark Stephens has been appointed by the court to represent Crusius, according to court records. Stephens did not immediately respond to CNN's request for comment.

Crusius is believed to have authored a racist, anti-immigrant document that laid out a dark vision of America overrun by Hispanic immigrants.

With the hate-filled writing, which authorities called a 'manifesto,' were the words: "I'm probably going to die today."

The four-page document, titled "The Inconvenient Truth," was published on the online message board 8chan about 20 minutes before the shooting. The writing is filled with white supremacist language and racist hatred aimed at immigrants and Latinos, and the author says he opposes "race mixing" and encourages immigrants to return to their home countries.

Some of the language of the manifesto reflects ideas from President Trump, Fox News and the modern Republican party. For example, the document warns of a "Hispanic invasion" and says Democrats are using "open borders" and "free healthcare for illegals" to attract new voters.

The writer cites a fear that an influential Hispanic population in Texas would make the state a "Democratic stronghold." But he says "the Republican Party is also terrible" because the GOP is, in his mind, pro-corporation, which could lead to more immigration.

The Department of Justice is treating the El Paso mass shooting as a case of domestic terrorism and is "seriously considering" bringing federal hate crime and federal firearm charges which carry a possible death penalty, US Attorney John Bash said Sunday.

The shooting appears to meet the statutory definition of domestic terrorism, Bash said, as it "appears to be designed to intimidate a civilian population, to say the least."

"We're going to do what we do to terrorists in this country, which is to deliver swift and certain justice," he said.

Harper says the agency executed three search warrants in the Dallas area Sunday morning and forensics processing and review of evidence collected at those scenes have begun.

Among the 22 victims, at least eight were Mexican nationals.

Mexican Secretary of Foreign Affairs Marcelo Ebrard said Monday the attack was "an act of terror, obviously on US territory, but against Mexican citizens."

A Twitter account linked to the suspect shared and retweeted President Trump's tweets, posted about the border wall and liked memes disparaging Sen. Bernie Sanders and House Speaker Nancy Pelosi. The account has seen little activity in the past two years.

A LinkedIn profile under the name Patrick Crusius said he was a student at Plano High School.

"I'm not really motivated to do anything more than what's necessary to get by. Working in general sucks, but i guess a career in Software Development suits me well. I spend about 8 hours every day on the computer so that counts towards technology experience I guess," the profile said.

He also wrote that he worked as a bagger at a grocery store for five months until he lost his mode of transportation.

Under "activities" he wrote, "I don't really participate in extracurricular activities b/c of a lack of freedom."

According to court records, Crusius has been unemployed for five months and told authorities he was living with his grandparents.

In a statement delivered by a family spokesperson, the suspect's grandparents said they were "devastated" by the El Paso incident and "pray for the victims of this tragedy."

He spent a few nights back at the home while his grandparents were out of town, they said.

"His drivers license and mailing address were at our house in Allen -- that connection has made us the focus of the media," the statement read. "We are talking only to law enforcement agencies and will not be making further statements to the media."