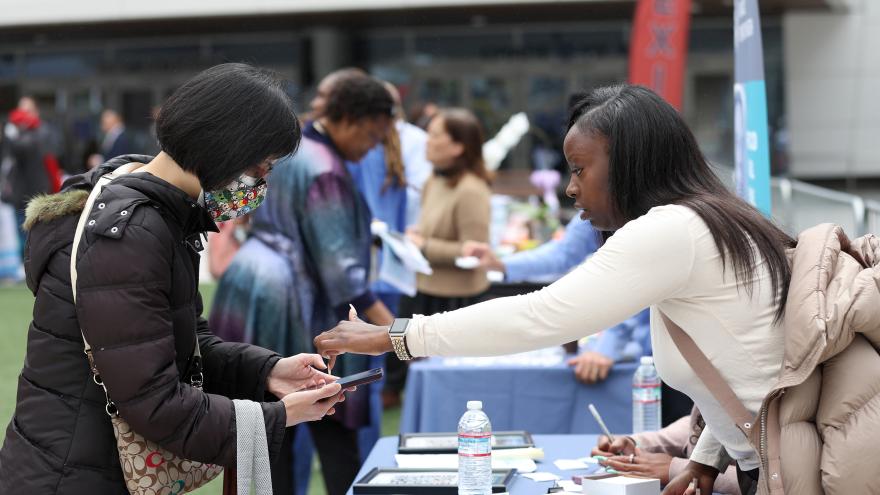 (CNN) -- The US economy added 372,000 jobs in June, an unexpected boost in hiring and a signal that the labor market remains robust despite recession fears, according to the monthly jobs report from the Bureau of Labor Statistics released Friday.

The unemployment rate held steady at 3.6%, still close to the 52-year low last reached in the months before the pandemic hit.

The June job total, slightly down from May's revised 384,000 jobs added, far surpassedexpectations. Economists polled by Refinitiv projected 272,700 jobs would be added in June, amid a period of economic unease and growing fears that a recession is brewing.

The strongest job gains for June came from the professional and business services, leisure and hospitality and health care industries, with notable increases in areas such as food services and warehousing and storage.

President Joe Biden praised the latest jobs numbers in remarks at the White House on Friday, saying, "Here's why it's important: Our private sector has now recovered all of the jobs lost during the pandemic and added jobs on top of that."

The President acknowledged the ongoing challenges of inflation, but he also argued that the jobs numbers indicate that his economic plan is working.

"I know times are tough. Prices are too high. Families are facing a cost of living crunch. But today's economic news confirms the fact that my economic plan is moving this country in a better direction," Biden said.

Private-sector employment is now above its February 2020 level by 140,000 jobs. However, government employment continues to lag by 664,000, putting the overall labor market at 524,000 jobs shy of its pre-pandemic level.

The labor market has remained a source of strength for the economy. The latest Job Openings and Labor Turnover Survey data released earlier this week showed there were 11.3 million available jobs in May, or 1.9 positions for every job seeker, along with historically low levels of layoffs.

Wages in June were still on the rise, but continue to be outpaced by the highest inflation in 40 years. Average hourly earnings were up 5.1% during the past 12 months. The labor force participation rate, at 62.2%, changed little from the previous month but remains below the pre-pandemic level of 63.4%.

"The job market is still plowing forward even in the face of increasing headwinds and recession fears," Daniel Zhao, Glassdoor senior economist, said in a statement. "Even if the economy is slowing, the labor market remains a point of strength for the recovery. Strong employer demand is supporting solid but slowing job gains."

Rapidly rising prices have the Federal Reserve in the throes of a campaign of successive rate hikes in order to cool the economy. Following the central bank's June rate hike of 75 basis points -- the largest such increase since 1994 -- Fed Chairman Jerome Powell signaled another hefty increase of either 50 or 75 basis points at its next meeting on July 26-27.

"They clearly communicated the intent to frontload rate hikes and then wait to see how those rate hikes were affecting the economy, and I would guess that they will continue along that path, which is to continue to be pretty aggressive," Leer said in an interview with CNN Business. "In addition to looking at the hard data, they're also very concerned about maintaining credibility with financial markets, with consumers. When they say they are here to maintain price stability, they really need the American public to believe them on that front, and financial markets in particular."

Next week's slate of key economic reports -- the latest Consumer Price Index, Producer Price Index, retail sales and consumer sentiment data -- will be critical in getting a gauge on the economy's health as well as on the influence of the Fed's actions, he added.

But if the Fed is too aggressive, that could potentially backfire, noted Josh Bivens, director of economic research at the Economic Policy Institute.

"It's still a tight labor market, it does not seem to me to be an accelerating, heating-up labor market; in fact, it shows some signs of cooling," Bivens said. "I think the narrative that this is just spiraling out of control and the Fed really needs to rein in things, it doesn't seem consistent with the last couple of months of data."

The softening of wage growth and continued march downward of monthly job gains are among the measures showing that the labor market has more than plateaued, he said.

"Given that the primary reason why the Fed tends to raise rates to slow inflation operates through the labor market and wage pressure, that job is mostly done, so I'm not sure what further aggressive rate hikes are really going to do beyond this," he said.

The pandemic continues to weigh on workers

The pandemic prevented more Americans from re-entering the job market in June, which saw an increase in Covid-19 cases from May.

Among those out of the labor force, some 610,000 people could not look for work in June because of the pandemic, up from 455,000 in the previous month. It's the first increase in this measure since the Omicron variant swept the nation in January.

The most recent Household Pulse Survey from the Census Bureau also showed that the pandemic took more of a toll on Americans' ability to work in June. Nearly 3.7 million people said they were not working because they were sick with Covid symptoms or were caring for someone who was sick, according to the survey, taken in the first two weeks of June.

This figure was 3.1 million in the prior survey, taken between late April and early May.

"There are indications that Covid, specifically the most recent Omicron variant wave, did disrupt work in some ways in that you can see the share of people who are employed but out sick," said Nick Bunker, economic research director for North America at the Indeed Hiring Lab, citing data from the household survey, which is one of two surveys flowing into the monthly BLS jobs report. "The share of employed people who are out sick in June 2022 not only was elevated compared to where it was pre-pandemic, it's actually slightly above what we saw in June 2020."

But what's different this time around from two years ago, he said, is that people aren't being kept out of the labor market because of Covid.

"It does look like there's still a direct impact of Covid on the labor market," he said, "but it shows up perhaps more now in terms of people getting it, being out sick for a week and then returning to work [as opposed to] people sitting on the sidelines of the labor market."

CNN's Tami Luhby and Maegan Vazquez contributed to this report.