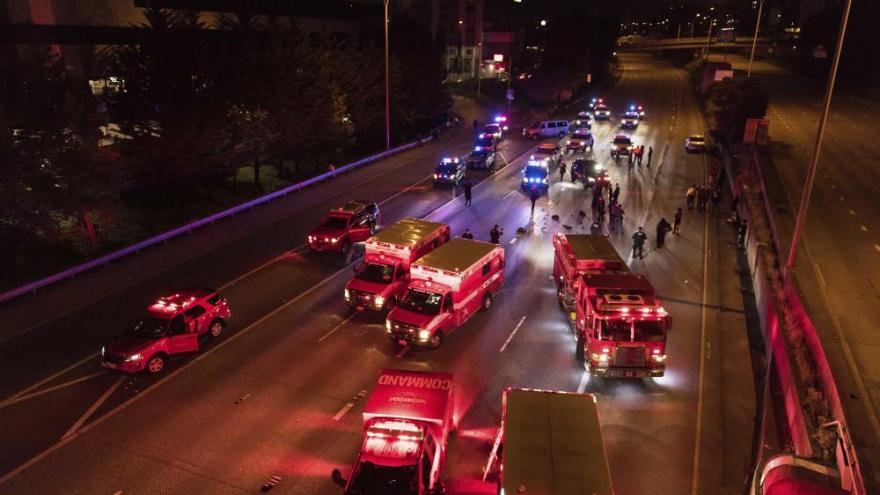 Emergency personnel work at the site where a driver sped through a protest-related closure on the Interstate 5 freeway in Seattle, authorities said.

(CNN) -- A driver has been charged in the death of Summer Taylor, a 24-year-old protester killed during a demonstration on a closed highway on July Fourth in Seattle.

Kelete was booked Saturday into the county jail. His attorney did not immediately respond to CNN's request for comment.

Seattle for weeks has been the scene of protests against police brutality and systemic racism, including in the six-block Capitol Hill Organized Protest area that police left in early June. Authorities cleared the zone on July 1.

Three days later, Kelete -- traveling at "freeway speeds" -- drove his white Jaguar XJL the wrong way up an Interstate 5 exit ramp just before 1:36 a.m., security footage from an REI store shows, according to the complaint.

The driver had to make a "deliberate and sharp right U-turn in order to drive (southbound) on I-5," the document says, adding that "numerous red signs warning that the driver is going the Wrong Way and Do Not Enter" were posted.

Kelete then drove toward a three-vehicle barricade put up by demonstrators before maneuvering onto the right shoulder. He continued driving at "freeway speeds" on the shoulder, passing the barricade as pedestrians tried to get out of the way, the complaint states.

Kelete then veered left sharply, directly hitting Taylor and another protester, Diaz Love, 32, according to the complaint. Both were taken to Harborview Medical Center, where Taylor later died.

A man followed Kelete and managed to get him to stop, keeping him there until police arrived. "Are they OK?" Kelete later asked, "presumably referring to the victims he had struck," court documents state.

Kelete showed no alcohol consumption on a portable breath test and denied taking any medicines, but he later told jail personnel he would be withdrawing from Percocet and struggled with an untreated addiction. Results of blood tests are pending, the complaint states.

A search warrant for Kelete's car was approved, and "several implements commonly used to smoke illegal substances and a substance that appears similar to crystal methamphetamine were recovered from the car," according to the complaint.

Love suffered multiple fractures of her legs and arm, plus internal injuries, and was in intensive care for several days, the complaint states. She was still in the hospital four days after the crash.