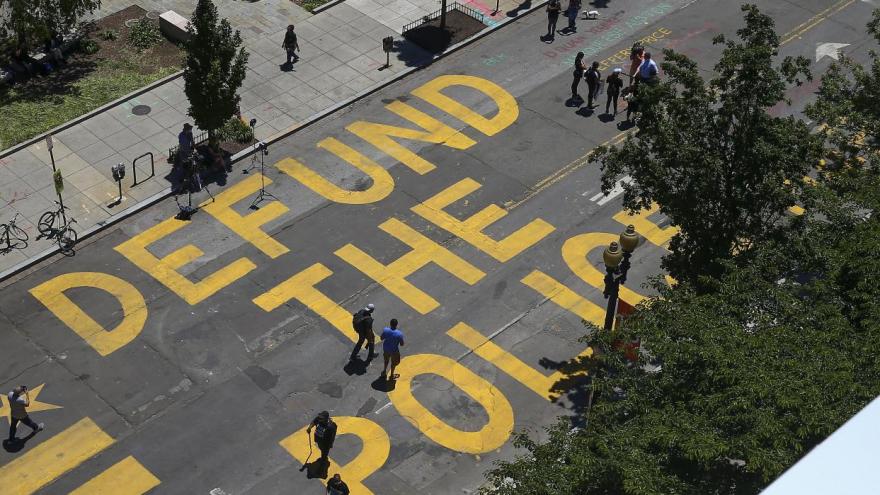 People walk down 16th street after Defund The Police was painted on the street near the White House on June 08, 2020 in Washington, DC. After days of protests in DC over the death of George Floyd, DC Mayor Muriel Bowser has renamed that section of 16th street "Black Lives Matter Plaza".

(CNN) -- As the nation looks at the vast amount of work that still needs to be done to bring an end to racial injustice, many demonstrators -- and some city officials -- are demanding that change includes the way the streets of America are policed.

In Minneapolis, where George Floyd's death focused the nation again on police brutality, enough members of the city council are calling for a major shift in policing that they might dismantle and replace the police department.

Cities like Los Angeles and New York have said they will cut millions of dollars in police funding.

President Donald Trump said Monday the United States has the finest police in the world and cutting budgets would be a mistake.

"We won't be disbanding our police. We won't be ending our police force in a city," he said at a law enforcement round table at the White House. "I guess you might have some cities that want to try, but it'd be very, very sad situation. If they did, because people aren't going to be protected."

But a sizable number of people think police departments need to be reworked.

Minneapolis has seen national attention with the police killings of Floyd, Philando Castile and Jamar Clark. And one former police officer -- Mohamed Noor, who fatally shot Justine Ruszczyk in 2017 -- has gone to prison for murder.

"We don't think that this department is reformable and it's time to make a real change," City Council member Steve Fletcher told CNN's Erin Burnett on Monday.

Fletcher said his constituents increasingly don't associate safety with calling the police. He said he believes that when people call 911 there is a way to respond with better and more compassionate resources rather than a police officer who will come with the threat of arrest.

Council President Lisa Bender said Sunday that they have the nine votes the city council needs for a veto-proof supermajority of the council's 13 members.

Bender told CNN's Chris Cuomo that the nine members made a pledge to rethink policing.

"Really what we pledged was to start a year-long conversation with Minneapolis residents to help us re-imagine what public safety looks like as we make those short-term fixes that are so clearly needed," she said Monday.

New York City moves some of its police department funding

"These will be the first of many steps my administration will take over the next 18 months to rebuild a fairer city that profoundly addresses injustice and disparity," he said in a statement.

Going forward, the city will also remove street vendor enforcement from the New York Police Department's responsibilities, so police can focus on the "real drivers of crime," de Blasio said.

But it can be a complex issue with a lot of money being considered. New York's police budget is nearly $6 billion, according to the city's expense budget forecast.

Meanwhile, across the country in Los Angeles, Mayor Eric Garcetti agreed last Wednesday to slash between $100 million and $150 million from the proposed funding for the LAPD after Californians decried a proposal to increase its budget to $1.86 billion.

The People's Budget LA Coalition called Garcetti's pledge "a start," noting that cutting $150 million from LAPD would "still leave LAPD with 51% of the city's unrestricted revenues."

Atlanta mayor says there are other avenues of change

Atlanta Mayor Keisha Lance Bottoms told CNN on Monday that defunding the city's police department is not a solution for her city.

She held up the thick budget binder for the city for the camera, saying defunding would be a more complicated issue than it sounds.

But, she said, the city has already begun to take steps to better its justice system.

"We have cut our corrections budget this year by 60% and we are moving that toward equity programs to help us transition our city jail into a center for equity health and wellness," she told CNN's Wolf Blitzer.

Citizens want more money for social support services and an end to "over-policing," she said.

'An invitation to chaos'

Houston Police Chief Art Acevedo said getting rid of a police department would be "an invitation to chaos."

He told Blitzer on Monday that he wants to see money go to improve police departments and social programs.

"What we need to do is do both," he said, adding that if you cut the police budget, one of the first things to take a hit will be training.

If a city was to consider disbanding its department, he said, there is a way to do it without cutting the budget.

He cited Camden, New Jersey, where the police department was replaced eventually with a new county agency, as an example of an alternative solution.

The chief called for a national set of standards rather than 18,000 departments having different policies.

Illinois Gov. J.B. Pritzker indicated that he thinks people are getting hung up on the word "defund."

He called it a "poor use of words to describe what many people really want," CNN affiliate WLS reported.

Pritzker said citizens want fundamental change in how police operate, according to WLS. The governor, who was in Matteson for a unity gathering in Floyd's memory, said he is working with the Illinois Legislative Black Caucus on legislation.

Other governors said they want to see reform but not defunding,

"We still have crime out there and when you invest in appropriate police work, whether it's a sheriff's office or a police department, you are investing in the community," Louisiana Gov. John Bel Edwards told reporters at a new conference on Monday.

"We are a nation of laws. We must stand up and protect those who get up and put on the uniform every single day and protect our families. So the notion that we are going to defund the police makes no sense," Reeves told reporters at a news conference Monday.

In Washington, House Democrats on Monday unveiled a bill that includes sweeping measures aimed at reform. It would establish a national registry for police misconduct.

He wants to withhold federal funds from agencies that don't meet "certain basic standards of decency and honorableness."