The dangerous morality behind the 'Open it Up' movement 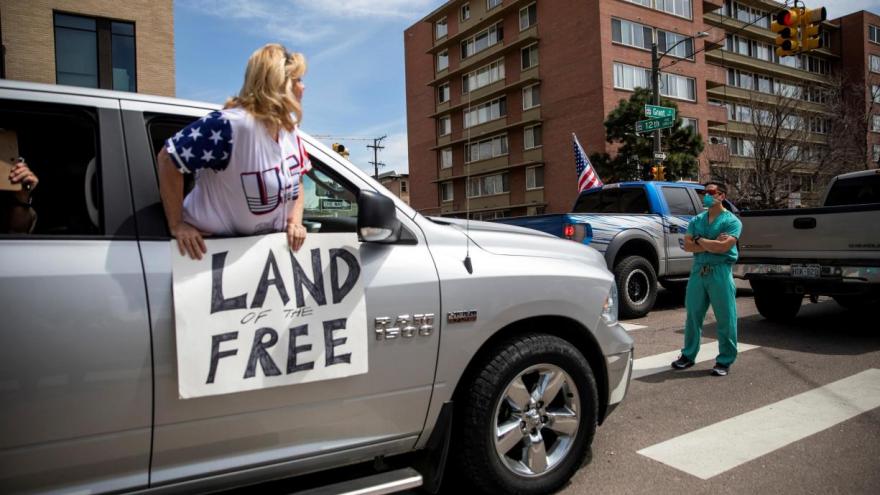 Health care workers stand in the street in counter-protest to hundreds of people who gathered at the State Capitol to demand the stay-at-home order be lifted in Denver, Colorado, U.S. April 19, 2020.

(CNN) -- A healthcare worker in green scrubs stands in the middle of an intersection, staring down a traffic jam of screaming protesters demanding a return to their livelihoods and liberties.

The photograph, taken Sunday at an "Operation Gridlock" protest in Denver, so clearly captures the tensions of this American moment that it could be ripped from Norman Rockwell's collection. Like the protesters and the healthcare worker, our country is poised, tensely, at a moral crossroads.

A quandary now confronts policymakers across the country: Should we reopen the economy to help the majority or protect the lives of the vulnerable by remaining in lockdown?

One answer to that question -- letting a minority suffer so that the majority may benefit -- is known as utilitarianism. And it's one of the most common, and controversial, ways of making moral choices.

In matters of life and death, like we're in now, strict utilitarianism can be downright dangerous.

"This is a moment when every country in the world is facing the same set of ethical questions and dilemmas," said Anita Allen, a member of President Obama's bioethics committee.

"How we answer will be a real test of our humanity and sense of justice."

The moral calculations behind utilitarianism

The coronavirus pandemic has killed more than 45,000 Americans and put some 22 million out of work. On Tuesday alone, the US recorded 2,751 deaths. Most health experts say we are weeks, if not months, away from ending social-distancing restrictions.

But recently, many conservatives have sided with the "Open it Up" protesters. In the process, they've made some very unconservative arguments.

"There is no zero-harm choice here," Rep. Trey Hollingsworth of Indiana said recently, to take one example.

"We are going to have to look Americans in the eye and say 'we are making the best decision for the most Americans possible,' and the answer to that is to get Americans back to work."

Hollingsworth later walked back his comments, but he is not alone.

"There are things more important than living," Texas Lt. Gov Dan Patrick said on Tuesday. Last month Patrick suggested elderly Americans might be "willing to take a chance" on their survival for the country's economic health.

This kind of moral calculus reflects an unpleasant truth about utilitarianism.

"When undergrads are first introduced to utilitarianism, they're like, 'This is really cool. I am a Utilitarian,'" said Jim A.C. Everett, a moral psychologist in England.

"But then you walk them through the implications of the philosophy, and they say, 'Oh no no no.'"

Utilitarianism began as an equalizing force

Utilitarianism started as an equalizing force in utterly unequal 18th century England, challenging the idea that princes should be treated better than paupers.

Moral philosophers like Jeremy Bentham and John Stuart Mill argued that our well-being should matter equally, regardless of social status.

There are several variations of utilitarianism, but to put it simply, the idea is the morally correct choice is the one that produces "the greatest good for the greatest number." Other ethical considerations and responsibilities don't matter, not even natural rights, which Bentham called "nonsense on stilts."

The benefit of utilitarianism, said Everett, a professor of moral psychology at Kent University in England, is that it can expand our circle of caring. The philosophy asks us to set aside personal biases and think about the good of all.

Utilitarianism can also be extremely helpful for fairly allocating scarce resources among large groups of people, and so is used often by bioethicists and health care experts. Italy, a country rooted in Catholicism, has used a utilitarian model to decide which Covid-19 patients would get its limited number of ventilators.

Most of us apply some form of utilitarianism In our lives, when we try to weigh the consequences of our actions. When we donate money to a charity, for example, we often choose one we think will do the most good for the most people. And utilitarians often argue that the wealthy should give far more than they do.

Why some philosophers believe it should apply to the pandemic

Peter Singer, the world's most famous utilitarian philosopher, says we have moral imperative to end poverty.

In the case of the coronavirus pandemic, Singer argues that saving lives should be weighed against the harmful effects of the lockdown, not just on the economy but on people's health and well-being.

The Great Recession in 2008, for example, led to increases in suicide and deaths from preventable cancer, according to studies published in The Lancet, a leading medical journal.

"It pains us to say it," Singer wrote in a recent column with fellow moral philosopher Michael Plant, "but US President Donald Trump is right. We can't let the cure be worse than the disease."

Singer is a strange moral bedfellow for American conservatives. He's taken a sharp stance against the "sanctity of life," describing it as an idea fit for "know-nothing religious fundamentalists."

Why some believe it shouldn't

To be sure, not everyone arguing to reopen the economy is doing it because they embrace utilitarianism.

Quite a few anti-lockdown protesters have made libertarian arguments, waving yellow "Don't Tread on Me" flags and insisting on their rights as "sovereign citizens."

But both stances ignore important moral responsibilities, said Allen of Obama's bioethics committee, which produced detailed reports on topics like the ebola outbreak.

Allen, now a provost at the University's of Pennsylvania's law school, said the committee would have likely helped guide the Trump administration's response to the coronavirus pandemic.

But President Trump has apparently decided not to name one, breaking a presidential tradition that dates to Gerald Ford in the 1970s.

"There's a reason every president before Trump had a bioethics board," Allen said.

Echoing other bioethicists, Allen said utilitarianism can be helpful in drawing up public policy, especially when trying to estimate potential costs and benefits. But in a pandemic, the moral philosophy can lead to immoral actions, she said.

"There seems to be an implication that we can do a cost/benefit analysis about how many people we are willing to sacrifice in order to get the economy going."

Such a sacrifice won't be distributed equally. Studies have shown that Covid-19 disproportionately strikes minorities, the elderly and the poor.

For example, black workers comprise about 12% of the American labor force but make up a much larger percentage in "essential services," like grocery stores, public transit, the postal service and large retailers like Amazon.

Basic fairness, Allen said, requires that we consider the impact on their lives and the many other frontline workers who will risk contagion if and when the country is reopened.

"When you think about re-opening the economy, we are not just saying 'some people' will be sacrificed for the greater good," Allen said. "We are accepting that it will have a particularly hard impact on those communities."

Some think we don't know enough yet

To some extent, we are already making those trade-offs.

Curtailing our individual freedoms to "flatten the curve" of the novel coronavirus could be considered a massive experiment in utilitarianism, said Julian Savulescu, a philosopher and director of Oxford University's Center for Practical Ethics.

But for the most part, we don't know enough about this new virus to make a good utilitarian argument, Savulescu said.

For example, models that seek to predict the death toll from Covid-19 in the United States have been disconcertingly varied.

"The reality is that if you are in a state where the lockdown is relaxed, you might be better or worse off," Savulescu said.

"The only way utilitarianism works is in conjunction with scientific research."

A big problem with utilitarianism

One of the biggest problems with utilitarianism is the ease with which it treats individual lives as mere means for social ends.

Consider one famous thought experiment: Would you kill one healthy person to save the lives of five others who desperately need organ transplants?

Utilitarianism argues yes, for the greater good, the one should be killed for the five.

"It jars our common sense," said Savulescu. "People feel a tension and don't know how to resolve it."

Now the pandemic is forcing doctors, nurses and policy experts to face this thought experiment in real life.

"The question is staring us in the face," said the Oxford philosopher. "Every day is judgment day."

The idea of harming an innocent person, for any reason, abhors most of us, no matter our ethical stance.

For Trey Hollingsworth, the Indiana congressman, it's a centerpiece in his stance against abortion. In 2017, he denounced Roe. v. Wade, calling the lives of the unborn "gifts from God" and pledging to do all he can to "continue fighting for the sanctity of life."

The point here is not to play "gotcha." It's to expose the moral inconsistency in considering some lives worth fighting for, while abandoning others for the good of "most Americans."

If unborn life is sacred, then so is all life, including the lives made more vulnerable when we go back to work.